For the European market, a large part of the bottles is packed in cardboard boxes and display cartons using a Gerhard Schubert GmbH machine.

Yakult founder Dr. Minoru Shirota’s vision has always been to improve the health of everyone around the world.

Over 80 years of research have been dedicated into this Japanese drink.

The scientist succeeded in selecting and cultivating the lactic acid bacterium, which was later named after him. This led to the development of the Yakult fermented drink in 1935.

Every small bottle contains at least 6.5 billion of these lactic acid bacteria, which reach the gut alive.

The probiotic drink is produced for the European market in Almere in the Netherlands.

The plant has increased its production capacity and, with the new Schubert machine, it can pack 43,200 bottles per hour.

The factory is supplying 13 European countries with Yakult. 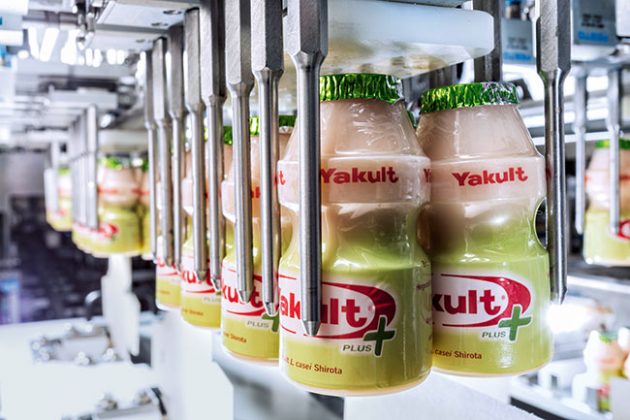 Depending on the order, the small bottles are pre-grouped into six- or eight-bottle formations.

“We wanted to change the secondary packaging from film to cardboard in the European market. That’s why we commissioned Schubert to develop a machine,” says Ronald Jacobs, plant manager at Yakult Europe.

“Together with Schubert’s experts, we developed an environmentally-friendly and practical form of packaging.”

In the easy-to-open display carton, the bottles containing the unique Shirota bacteria are now available in supermarkets for Yakult customers.

The bottles can be safely and securely stored in the box in the fridge at home.

The specifications for the packaging system were varied: flexible format options, high performance and a small-predefined footprint were on the wish list.

The machine also had to offer the option of inserting a leaflet between the bottles in the pack for customer information purposes.

The carton blanks are picked up by F3 robots in the magazine and made available in a horizontal position.

The F2 robots pick up these blanks, glue them as they pass through the gluing station, press them through the folding unit and place them directly on a Transmodul, which transports the erected cardboard boxes to the next work steps. 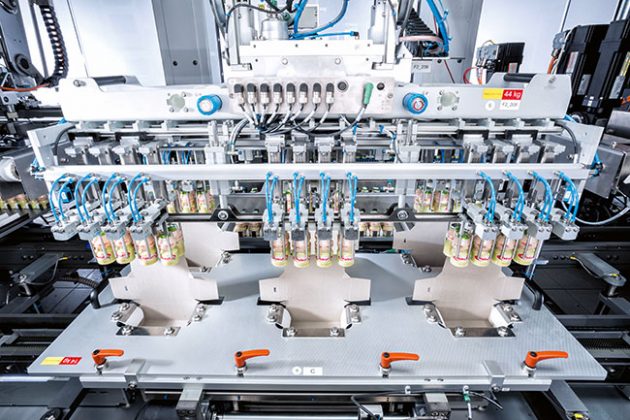 The F2 robots placing the pre-grouped bottles inside the erected cardboard boxes.

At the same time, the transport chain guides the bottles from the upstream machine into the TLM system.

“Distributing bottles from a single-path infeed to two paths at high speed was quite a challenge,” says Georg Koutsogiannis, the Sales Account Manager at Schubert responsible for the project.

A grouping chain distributes the bottles on two tracks to the two infeed screws, which individually transfer the products to two toothed belt conveyors.

From there, the bottles enter the receiving areas of two F2 robots, each of which removes 48 bottles from the conveyor and places them on a Transmodul of the system’s second Transmodul section.

This Transmodul transports the bottles to two further F2 robots.

The robots each grip 24 bottles simultaneously, push them together to carton size and place them in the erected cardboard boxes on the first Transmodul section.

Depending on the format, either twelve or 16 cardboard boxes are filled simultaneously.

If required, a leaflet is inserted between the bottles before a camera checks the packaging for completeness and it is closed by the next two F2 robots.

The sealed cardboard boxes are then placed in a display carton by two further F2 robots, each with five units.

The display cartons are also erected following the same principle as the cardboard boxes in the system and transported to the filling area via a fourth Transmodul section.

Schubert solved the upward discharge of the filled display cartons with an integrated elevator.

Another special feature of the new Schubert packaging machine is the central glue refilling station for erecting and closing the cartons.

“We are proud that we were able to achieve the desired performance in the given space,” Koutsogiannis extols. 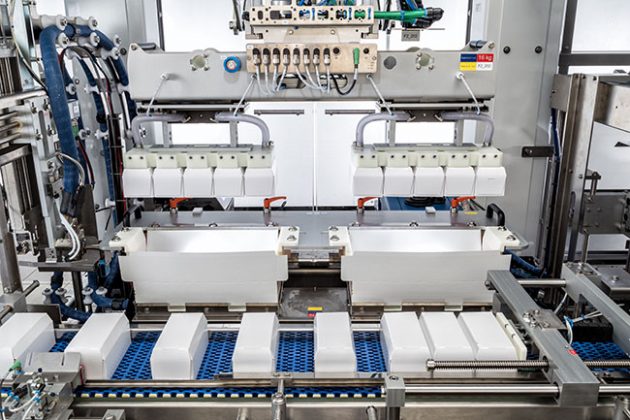 The filled and sealed paperboard boxes are packed inside the corrugated display cartons on the same machine.

The installation, which took place at the beginning of 2018, ran smoothly.

Koutsogiannis gladly reports: “In ten days, the system was built, set up and ready for the first production runs.”

Jacobs also confirms: “We are very satisfied and can operate the system easily. It is our first machine sourced from Schubert.”