Belgian-headquartered Destrooper-Olivier, a globally-known manufacturer of baked good products was looking for a packaging solution for its award-winning almond biscuits.

Founded in 1989, the family-owned Belgian business currently produces its own “Belgian Butter” brand waffles and biscuits, and products for its own brands of major international department store chains that distribute the waffles and biscuits to more than 60 countries around the world. Today, the Belgian biscuit specialist manufactures its products in a state-of-the-art plant in an area of around 16,000 square meters.

The company brought in its first Gerhard Schubert GmbH machine to help package its products in November of 2016.

Schubert project manager Georg Koutsogiannis, responsible for sales in the Benelux (Belgium, the Netherlands, and Luxembourg) countries, had established contact with Destrooper-Olivier during the 2016 ProSweets trade fair in Cologne, Germany.

For its first equipment order, the baked goods processor formulated a number of complex requirements for Schubert—focusing on its Almond Thins product, a wafer-thin butter biscuit with almond flakes that is extremely delicate requiring correspondingly gentle handling.

“An essential requirement was a precise packaging unit, capable of handling the products with great care, and also be a top performer. The unit also had to be compact,” says Schubert project manager Georg Koutsogiannis, noting that the biscuit manufacturer’s production facility was a complex arrangement. 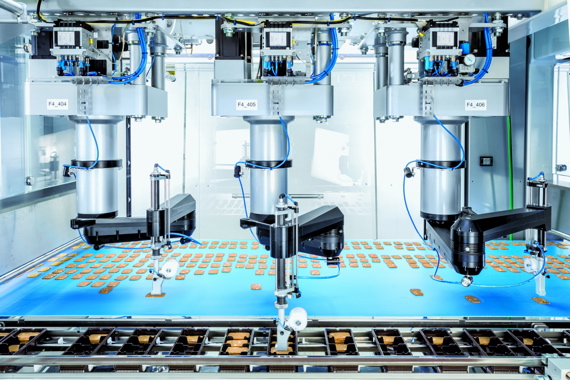 Nine TLM-F4 robots are at the heart of the Destrooper-Olivier installation.

The TLM-F4 robots are a four-axle pick-and-place robot which in co-operation with the TLM Vision System picks products from a continuously running product belt and groups them in a box, tray or transmodule. The TLM-F4 arm can reach a speed of five meters/second.

“Our design gave Destrooper-Olivier the ability to achieve the required high speed and precision, while at the same time, ensuring optimum accessibility,” says Koutsogiannis.

This installation, which consists of only four TLM sub-machines—It refers to self-contained fully-functional machines which contain one function of a complex packaging machine—packs the biscuits in three different tray formats.

Since all components for this installation came from the same supplier, optimum networking was guaranteed.

The results are maximum reliability and economy, in part due to Schubert’s equipment designed without an electrical cabinet. The non-electrical cabinet design reduces maintenance costs by providing comprehensive energy savings as well as high machine efficiency and availability.

The customer can automate packaging tasks on the basis of an operator-friendly control in a close to trouble-free operation. In fact, only one employee is required to operate the system, with scheduled format changes completed within 10- to 15-minutes.

In the first sub-machine, TLM-F3 robots take over unstacking the plastic trays from the magazine, placing them on the conveyor belt for further transport to the next sub-machine.

The TLM-F3 robots designed and built by Schubert, were developed specifically for removing packaging materials from magazines in the most efficient way. After a few parameters have been entered, it independently peels a box blank from the stack, with a pneumatic clamping device at the wrist ensuring the exact placement of the suction or gripper tool.

For Destrooper-Olivier, the pick-and-place robots load the trays with the baked goods—currently, the products are packaged in three different tray formats with three to four compartments. 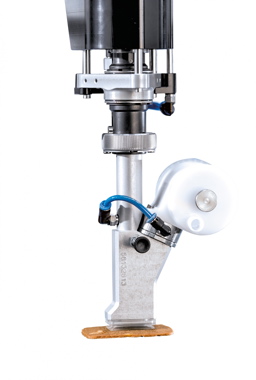 A scanner makes sure that each robot picks up a biscuit in its center, ensuring that the product is set down gently into the tray without any damage.

Individual biscuits arrive using a patented Schubert counterflow system are separated by a spreading belt before a scanner determines their precise position on the belt.

The data from the position determined in this way is used to control nine TLM-F4 robots positioned in a single row. This ensures that the pick-and-place robots pick up the individual products precisely at the center, with a vacuum suction pad to gently place them into the package tray cavities.

For Destrooper-Olivier who always endeavor to enter into sustained cooperation with its partners, the successful results obtained from the Schubert packaging solution have the biscuit maker thrilled, with both parties anticipating a new long-term partnership.