Because you asked us, Canadian Packaging has a taste test of a pair of Nestea products.

Even without tasting it, we first looked towards the labeling to see what each contained. Force of habit, or is that what consumers do on a regular basis? If not, why not?

Each of the plastic bottle drinks received at Canadian Packaging contained 500mL of the refreshing beverage made with real tea. However, each is also available in 12-packs of 355mL cans.

The bottles are manufactured by Amcor from PET plastics (Polyethylene terephthalate), while the labels and caps are also recyclable materials. CSI Closure produces the caps.

According to Coca-Cola, the response to the new flavors has been great, with consumers finding them to be a great addition to the Nestea brand portfolio.

Rather than provide the confusing ‘serving’ data, the nutritional information was clearly marked for the actual 500mL contents. 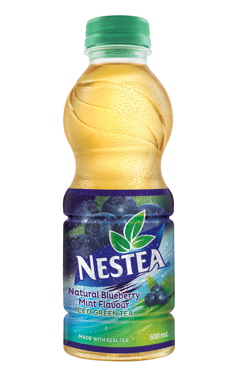 At first glance, it appears that for those who need to be careful about their intake of calories, salts and sugars – the Natural Blueberry Mint Flavour is the more palatable option.

It certainly lacked that bouquet of fruit that was present when we opened a bottle of the Blackcurrant drink, but the Natural Blueberry Mint flavor certainly held its own in the flavor category.

If you are purchasing Nestea not because of its unique and tasty flavor profiles, but  because you believe it is a healthier lifestyle choice—wait.

Which do you want now? An iced tea flavor or a cola flavor?

The way to look at it, is that Nestea beverages are indeed iced tea drinks and even homemade versions are sweet.

The point of contention really, is whether or not one likes the Nestea flavors. Canadian Packaging tasters did.

Natural Blueberry Mint Flavour
Despite the slight bitterness of the mint, it actually helps cut back some of the sweetness one would expect from a blueberry. The mint actually seemed to provide—even subconsciously—a fresh feeling in the mouth.

Natural Blackcurrant Flavour:
Heady aroma of blackcurrant when first opened, sweeter in taste and had a darker golden color that was more reminiscent of tea than the Blueberry Mint product.

Note: Nutritional data for the same product may vary in different countries. Flavor profiles might even be slightly different thanks to water sources or even ingredients used.

Coca-Cola in Canada is represented by Coca-Cola Refreshments Canada and Coca-Cola Ltd. For more information, visit www.coca-cola.ca or www.thecoca-colacompany.com.