Maple Syrup — A new record-breaking harvest despite the pandemic 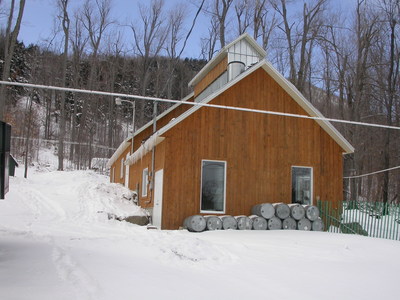 LONGUEUIL, QC, June 1, 2020 /CNW Telbec/ – Almost four months after the official launch of the 2020 sugaring off season, the Québec Maple Syrup Producers, in partnership with the Maple Industry Council, have announced a new record for maple syrup production. This year’s harvest is estimated at more than 175 million pounds of maple syrup for all of Québec, an average yield of 3.59 pounds per tap.

Although the pandemic had an impact on processes and methods, the syrup kept on flowing. An additional 2.3 million taps in the last two years and a chilly April could explain why this season was so successful. “We’re delighted at the announcement. After an uncertain start to the season and a bumpy road along the way, it’s very welcome news,” said Serge Beaulieu, Québec Maple Syrup Producers president since 2007. “The resilience and ingenuity of our maple syrup producers during the pandemic has certainly paid off, and I couldn’t be happier. This most unusual year is one we won’t forget. It will go down in the history of our organization,” he added.

As for maple syrup buyers, the Maple Industry Council president Sylvain Lalli said he too was proud of everything his members have done since March to ensure operations can continue safely. “Despite the pandemic, retail demand for syrup has remained strong, and we hope that sales to hotels, restaurants, and institutions and to gift shops, all of which have been hit hard, will pick up,” he added.

A new way of doing things
COVID-19 caused plenty of hiccups for maple syrup producers this year. The Québec Maple Syrup Producers organization was quick to put measures in place to limit the spread of the virus and its impacts on producers. Changes affecting the delivery of maple syrup barrels, farm gate sales, equipment cleaning, and travel between regions were introduced to ensure operations could continue in compliance with the government’s hygiene rules. Many producers had to innovate and come up with new ways of selling directly to customers, mainly by switching to online sales.

Maple syrup all year long
Although the sugaring off season is over, maple syrup is available throughout the year. Customers can visit erabledici.ca to find maple syrup producers offering online sales or delivery. The website also has a feature for searching by region or by product, such as maple taffy, butter, or sugar. It’s the perfect opportunity to support our valiant producers and buy local.

About the Québec Maple Syrup Producers and the Maple from Quebec brand
The mission of the Québec Maple Syrup Producers is to promote the interests of Québec’s maple producers and to develop the production and sale of Québec maple products to their full potential while respecting the principles of sustainable development. The organization represents some 11,300 producers and 7,400 businesses whose hard work has made Quebec responsible for an average of 72% of the world’s maple syrup production on an annual basis. The Québec Maple Syrup Producers proudly support the Maple from Quebec brand and coordinate the international marketing and promotional efforts for Canadian maple products on behalf of Canada’s maple industry. The organization also leads and directs the International Maple Research and Innovation Network.
ppaq.ca – @AcericoleQc