WASHINGTON, DC—Nearly 800 million people around the world lack the nutrition they need to lead a healthy life. To help in the fight against global hunger and malnutrition, U.S. Senators Pat Roberts (R-Kan.) and Debbie Stabenow (D-Mich.) teamed up with The Kraft Heinz Company chief executive officer Bernardo Hees and board vice-chairman John Cahill, along with other members of Congress on March 28, 2017 to package life-saving meals for families in need at the Reserve Officers Association in Washington, D.C.

Among the approximately 100 participants in attendance, members of Congress and congressional staffers worked alongside several leading food, agricultural and hunger-relief organizations to package more than 7,500 meals, which will be distributed through Rise Against Hunger, an international hunger relief organization that delivers food and aid to the world’s most vulnerable populations.

“Together, we can end global hunger,” states Hees. “We are deeply thankful that so many U.S. leaders in the food and agricultural space were willing to join us in this effort.”

The event was part of an international commitment on behalf of Kraft Heinz to fight global hunger. Last week, the company announced that it would donate one-billion nutritious meals to people in need by 2021.

Attendees at the Kraft Heinz and Rise Against Hunger event in D.C. also included: 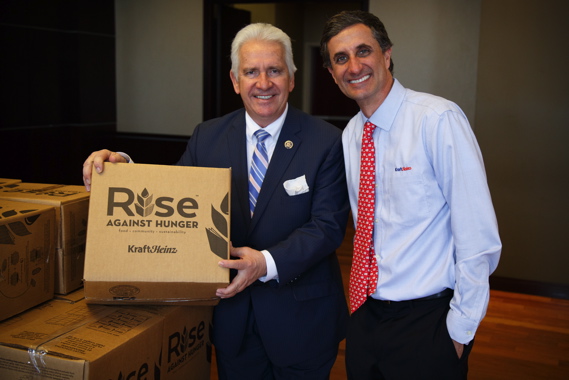 Rep. Jim Costa (D-Calif.) on the left and Kraft Heinz chief executive officer Bernardo Hees joined about 100 participants at a meal-packaging event in Washington, D.C. on Tuesday. Together, business executives, members of Congress and representatives from food and agriculture organizations packaged more than 7,500 meals for the international hunger relief organization Rise Against Hunger. Photo courtesy of Kraft Heinz.

Rise Against Hunger meals are packaged through community or corporate-sponsored meal packaging programs like the event at the Capital.

For more than a decade, the Kraft Heinz Micronutrient Campaign has sponsored the development and distribution of micronutrient powders that deliver essential vitamins, minerals and iron when stirred or mixed into children’s foods.

These nutritious, easy-to-use powders are manufactured by The Kraft Heinz Company and have been proven effective in preventing and treating iron-deficiency anemia, and other vitamin and mineral deficiencies.

ABOUT RISE AGAINST HUNGER
Rise Against Hunger (formerly Stop Hunger Now), an international hunger relief organization based in Raleigh, N.C., works to implement immediate and long-term solutions to hunger worldwide. With program locations in 20 U.S. cities and five international offices, Rise Against Hunger has engaged volunteers to package more than 310 million nutrient rich meals for distribution to 74 countries around the globe. To find out more about Rise Against Hunger, visit www.riseagainsthunger.org.

Image at top of article: As part of its fight against global hunger, The Kraft Heinz Company joined members of congress at a meal-packaging event in Washington, D.C. on Tuesday. The company’s board vice-chairman John Cahill (left) joined event co-host and U.S. Senator Pat Roberts (R-Kan.), along with IDFA president and chief executive officer Michael Dykes (right). Photo courtesy of Kraft Heinz.