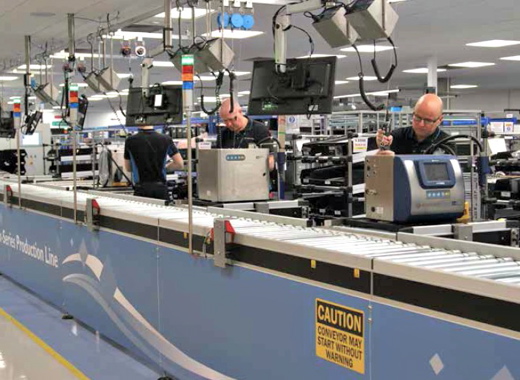 A dot is just a dot to the naked human eye—a tiny punctuation mark used to  end sentences or, more recently, to direct Internet users on to their chosen websites.
Which is why it’s unthinkable to trust human eyes to track and verify the quality and integrity of billions of machine-readable product codes, text, graphics, logos and other critical variable product information produced by continuous inkjet (CIJ) printers for countless food-and-beverage, pharmaceutical, personal-care and other CPG (consumer packaged goods) industries all over the world.
Also referred to as small-character inkjet coders, CIJ technology deploys a quick-drying, non-contact process—whereby the printhead is separated from the surface anywhere between five to 25-mm—to propel electrically-charged ink drops onto the item’s surface to create a sequence of rounded dots that form a dot matrix code, among many other types of machine-readable text.
Introduced in the 1950s, CIJ printers continue to dominate the product identification market to this day despite considerable advances in other product marking technologies, such as laser and thermal transfer, by providing a relatively low-cost means of high-speed product coding, in multiple orientations, onto almost any surface.
Originally used to code primarily onto metal, glass, cans, porous or semi-porous cardboard and paper, CIJ system manufacturers have improved the quality of their printing inks to extend the technology’s application range to include flexible packaging, plastic bottles and containers, plastic moldings and coatings.
With CIJ inks nowadays available in many colors for almost every product and substrate—including specialty inks that can cope with tough processes such as retort and flash freezing—CIJ coders are currently being used to mark an estimated 65 per cent of all the primary packaging produced worldwide.

That said, the core ink depositing and dispensing technology used to apply the tiny ink droplets onto the surface has remained largely unchanged over the past couple of decades, just as the manufacturing industries using them have radically transformed the way they do business.
This apparent gap has cast some doubt on the CIJ systems’ ability to keep up with today’s increasing demand for higher-quality, longer-life product codes that underpin the effectiveness of sophisticated new product traceability initiatives and complex supply chain operations relying on 100-percent coding accuracy and quality to make all their advanced ERP (Enterprise Resource Planning) and MES (Manufacturing Execution Systems) enterprise software to run like clockwork.
According to a recent white paper published by the Cambridge, U.K.-headquartered product coding technologies group Domino Printing Sciences, “The continuous inkjet industry has arguably failed to keep pace with the industries it supplies.
“While CIJ printing has earned its place and longevity as the favorite coding technology, it has not been the focus of significant technological innovation,” notes the report, titled Rewriting the Rules: How Continuous Inkjet is Changing to Meet the Future Needs of Manufacturing.
“Meanwhile, technological advances in manufacturing environments have delivered significant improvements in production techniques, speed and product lines,” the study points out. “Likewise, digital developments have resulted in improved traceability and customers expect and demand more information to be made available on their products.”
As the Domino report points out, “The importance of consistent, high-quality coding on packaging or labeling cannot be overstated.
“Increased globalization has changed the way many businesses operate and organizations are functioning in highly complex supply chains, where misleading information or poor quality codes can have detrimental effects,  both for consumers and for organizations.
“The correct information must be coded onto the right product with 100-percent accuracy.”

Given that the CIJ-generated codes can only be as perfect as the tiny dots propelled from the printheads’ nozzles, Domino’s R&D staff have spent the better part of the four years developing the so-called “perfect drop” technology that would enable the company’s manufacturing clients to meet all their new and future production challenges with the company’s new-generation Ax-Series of CIJ printers.
Formally launched early this month at the PACK EXPO International 2016 exhibition in Chicago and a week later at the ALL4PACK Paris expo, the Ax-Series systems are Domino’s first all-new line of CIJ printers since it 1998 introduction of the popular A-Series CIJ printers that the new coders are intended to replace.
Nowadays operating as an autonomous subsidiary of the Japanese-based multinational electronics and electrical equipment conglomerate Brother Industries, Ltd., Domino carried out a series of extensive capital upgrades at its Cambridge manufacturing facility to pave the way for production of the new Ax-Series coders.
The comprehensive upgrades included installation of a new dedicated assembly line—featuring cutting-edge testing and instrumentation technologies to ensure efficient, error-free manufacturing process—and intensive skill training for all staff operating the new line.
“The Ax-Series is our most exciting new product in a decade,” said Domino’s group sales director Ben Rock, who joined the company back in 1991 to embark on a series of senior management roles at its various global operations, including a four-year posting as country manager in Japan.
“Our customers around the world told us that they want the highest-quality codes possible and truly error-free coding,” Rock told a group of  international packaging industry press flown in to Cambridge last month from around the world by Domino for an exclusive pre-launch product preview.
“The cost of having incorrectly coded products is very significant in the retail industry, running into billions of dollars, not only due to retailers fining their product suppliers but also accounting for the cost of rework and lost productivity.
“Our customers also told us they wanted easy integration and connectivity for their factories of the future,” Rock added, “and to be virtually service-free.
“The last thing that a big food manufacturer needs in the middle of a night-shift is having to stop the production line unexpectedly to replace the consumables (ink) or to service the printer,” he said.
According to Domino’s group product director David Bywater, the company’s R&D team revisited the science behind the so-called Plateau-Reyleigh Instability phenomenon—first explored by the Nobel Prize-winning physicist Lord Rayleigh in late 19th Century—explaining why and how a falling stream of fluid breaks up into smaller packets with the same volume but less surface area.
“Having the benefit of the latest technology to analyze and understand exactly what happens when an ink drop is generated enabled us to use Lord Raleigh’s theories to reinvent continuous inkjet printing,” Bywater related.
“We arrived at a conclusion that the best, most reliable, most consistent and highest-quality codes rely on the ‘perfect drop,’ which for its part relies on a perfect drop generator, with all the variables removed.”
With the Ax-Series printers, “We are rewriting the rules on inkjet drop generation,” Bywater asserted, crediting a multinational team of scientists and technical experts assembled by Domino for developing the new and unique frequency-matched i-Pulse printhead design to facilitate consistent “perfect drop” execution. 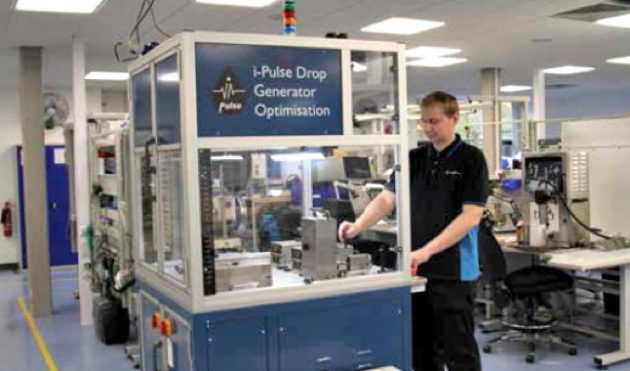 A Cambridge plant employee carrying out quality assurance tests on the i-Pulse printhead.

According to Domino, the i-Pulse design “controls individual ink drop formation to create the perfect drop every time, delivering significant  advances in droplet accuracy, placement and ink usage for reliable, high- speed and consistent code quality.”
For its part, the new nozzle-sealed printhead vastly improves print capability, readability, resolution and high-speed generation of multiple lines of text and data, according to Domino, making all the barcodes—including the QR (quick response) codes and other two-dimensional symbologies—easily scanable by most commonly used MRC (machine readable codes) and OCR (optical character recognition) systems around the world.
This worldwide system compatibility is especially critical for Domino, Rock explained, because more than 93 per cent of the company’s sales and installations take place outside of Britain.
Of all the new innovations featured on the Ax-Series printers, one of the most significant is the placement of the ink dispensing nozzle closer to the printhead’s dispensing hole—reducing the inkjet’s traveling distance and facilitating the “perfect drop” dot formation, without forming unwanted ‘satellite’ mini-dots that can compromise code integrity.
In practice, this novel modification enables the new Ax-Series printers to deposit 85,000 drops per second—compared to 64,000 with the previous nozzle-mount positioning—resulting in a 30-percent faster throughput.
In addition to conducting well over 100,000 hours of rigorous testing of the new printhead, according to Bywater, Domino also developed a new range of i-Pulse inks to “optimize” the printhead’s performance, while also extending the system’s use into many exceptionally harsh industrial environments, including retort (sterilization) processes, frozen-food applications, and returnable glass bottle processes.
Formulated and manufactured at Domino’s ink factory in Liverpool, the new i-Pulse inks also include new fast-drying, ketone-free inks for flexible food packaging applications, meeting all the internationally-recognized food safety standards.
As the third pillar of innovation driving the Ax-Series development, the new i-Techx electronics and software platform was designed to take the coder’s user-friendliness to “system usability scores that are comparable to smartphones,” according to Domino.
“Designed from the ground up to be Industry 4.0-ready, the Ax-Series not only integrates into existing production lines, but also supports a variety of standard factory automation communication protocols,” Domino explains, including PACK-ML and OPC-UA protocols.
“Through use of the latest user experience (UX) development techniques, the redesigned user interfaces are intuitive to use, and also include language and character options that enable operators to customize the touchscreen format and ensure easy operation,
“Meanwhile, the high-speed electronics enable serialization and other unique item coding applications on the fastest production lines.” 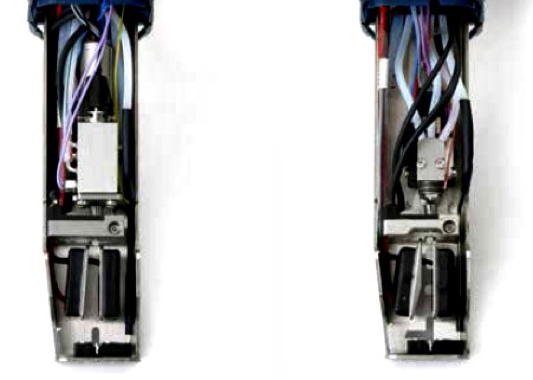 Available in the Ax150i, Ax350i and Ax550i models, each of the Ax-Series CIJ printers is a showcase of the company’s holistic Domino Design approach developed to streamline the machines by reducing the number of parts and components, while minimizing the need for operator intervention.
While providing IP66-rated sealed electronics enclosure and a marine-grade stainless-steel cabinet for the Ax550i to handle the harshest production environment, the Domino Design team managed to produce new printers with a 20-percent smaller footprint than the legacy A-Series printers they replace, while cutting the weight of a basic printer model from 33 to 22 kilograms.
“Constant automatic monitoring and control of the ink condition through the unique Quality Management Module (QMM) ensures the ink is always optimized, and the traditional ink shelf-life is significantly extended,” Domino adds.
“The three-stage solvent recovery system with active gutter control minimizes solvent consumption,” according to Domino, “while the thermally-engineered cabinet reduces heat build-up, extending component life [and] measurably reducing cost of ownership.” 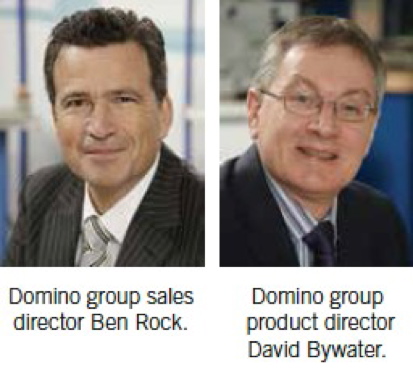 With an estimated installed base of 150,000 A-Series CIJ printers already in operation worldwide, Domino is confident that the growing demand for more reliable and better-quality product will drive robust switchover to the new Ax-Series printers among existing and future customers.
Some of the key markets drivers for better-quality coding include:

“In some industries, there is a particular need for ultra-accurate coding placement,” Domino notes. “For example, electronics products are increasingly miniaturized, meaning that codes too must become smaller and more precise, with every component of a product individually coded.
“For instance, there are 1,200 parts in a typical mobile phone, each one with its own individual code so that they can all be traced back to manufacture.”
All in all, Domino expects the next five years to be a critical stage in speeding up the technological progress and marketplace adoption of new-generation CIJ technology worldwide, with the company now exceptionally well-positioned to lead the charge.
“In developing the new series,” the study proclaims, “Domino has rewritten the rules of coding and marking by revisiting the underlying science behind CIJ and introducing innovations in three key areas.
“This has resulted in a comprehensive re-engineering of CIJ technology that will reset customer expectations of productivity, quality and the cost-of-ownership.”