There’s nothing wrong with making lemonade when lemons are all that life gives you. But when you’re spoilt for choice with juicy and tender peaches, grapes, cherries, plums and other sweet crops harvested in Ontario’s famed Niagara fruit basket, the possibilities for creating
memorable new beverage experiences are virtually limitless.

And indeed, sky appears to be the limit for Matt Giffen, founder and president of Bench Brewing Company in Beamsville, Ont.

Despite being a relative latecomer to Ontario’s burgeoning craft brewing industry— commencing its own brewing operations in earnest in early 2018— the upstart beermaker already has few equals in the segment in terms of product diversity or originality. 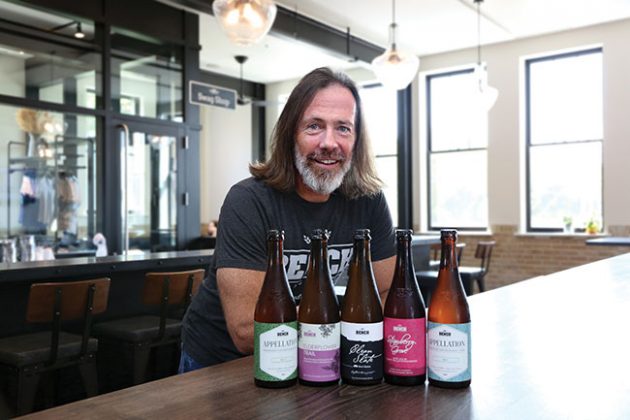 “We currently have a portfolio of 45 beers and we’re just getting started,” Giffen told Canadian Packaging on a recent visit to the 16,000-square-foot microbrewery housed behind a two-storey, red-brick structure originally erected as a wooden schoolhouse way back in 1832, upgrading to a brick structure in 1864.

Fronted by a chic 6,000-square-foot tap room and full-service kitchen inside the former Maple Grove Schoolhouse—along with an adjacent beer garden overlooking neighboring farms, orchards and vineyards—the brewery already employs 29 full-time and 35 part-time people at the eight-acre site, which including a three-acre hops field used to grow unique specialty hops used in many Bench Brewing brands.

Built over a busy 18-month stretch from the start of 2017 up to the Canada Day long weekend of 2018, the brewery is currently producing about 12,000 hectoliters of beer annually, according to Giffen, a former banker clearly enthused by his chosen new career path.

Like many of its industry peers, Bench Brewing initially started out in 2016 by using other established Ontario microbrewers to co-pack its brands, taking the due time and diligence to find a perfect home for bringing Giffen’s vision of a ‘Beer from Wine Country’ to life.

“We are so proud of our unique beer produced from ingredients sourced from Niagara’s Twenty Valley that we want to make sure that we share it with beer lovers across Ontario, Canada and around the world,” says Giffen, stressing critical importance of the “unique terroir of the region” captured in many locally-sourced ingredients.

Modeled after the traditional farmhouse brewing operations found across Belgium, Bench Brewing takes a lot of pride in leveraging the region’s unique history and geography as core competitive advantages in an increasingly competitive and crowded domestic market for Ontario craft beer.

“It is a competitive marketplace,” Giffen acknowledges, “but one that we are happy to be a part of. 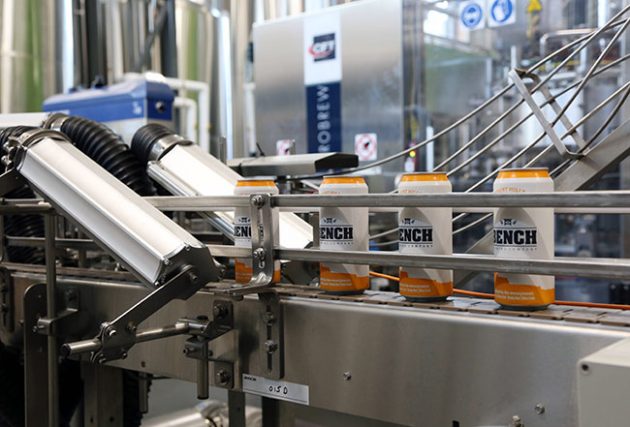 Supplied by Ball Corporation, the direct-printed cans of Bench brand craft beer are moved towards the Adamark air knifes, supplied by R.E. Morrison Equipment Inc., to remove moisture and condensation from the cans’ surfaces.

“We are proud to be a part of a brother/sisterhood that is starting to really draw attention to Ontario and all the great brewers we have in the province.

“As a relatively new entrant to craft beer scene, we don’t view other craft breweries as competitors, but rather as partners and collaborators in the great Ontario craft marketplace,” Giffen relates.

“We believe that the craft sector will continue to grow as more Ontario beer drinkers shift their preference to the superior taste and quality that the craft category provides.”

Sold at LCBO (Liquor Control Board of Ontario) outlets, select grocery stores, and bars and restaurants across Ontario, Bench Brewing brands are also distributed in British Columbia, Alberta, Manitoba, Saskatchewan and Quebec, Giffen relates, as well as some markets in the U.S. and China.

“Some of our most popular products are our Community Range beers that pay homage to important landmarks in an around Niagara’s Twenty Valley,” says Giffen, citing the company’s flagship Ball’s Falls Session IPA brand, along with other popular labels such as Jordan Harbour Belgian Pale Ale, Short Hills East Coast IPA, Stone Road White Ale, and Twenty Mile Farmhouse Ale.

All of these brands are packaged in 473-ml Tallboy-style aluminum cans purchased from the U.S.-based Ball Corporation and filled on the brewery’s CFT canning line running at operating speeds of about 100 cans per hour.

Manufactured by the Italian-based CFT Group, the 10-head rotary filler is located in the brewery’s so-called Clean Side of the operation, as opposed to the fully-separated Funk Side dedicated to bottling fruit-infused sours and other less conventional specialty beers.

“We use cans and bottles for different reasons,” Giffen explains. “Sealed cans can help beer destined for travel to stay fresh longer by helping maintain required carbonation levels and preventing light from striking and oxidizing the beer.

“Bottles, on the other hand, are better containers for beers that are meant to be cellared or bottle-conditioned—just like you would with fine wines.

“These types of beer can still contain small amount of yeast that continues to work away over time,” Giffen relates, “resulting in more complex and interesting flavors.”

One of those interesting flavors, Plum Grove, has in fact gained priceless worldwide recognition earlier this year by picking up the coveted Best in World honors in Sour Beer category of the 2019 World Beer Awards competition in Brussels, Belgium.

While Giffen is naturally proud of this “extraordinary achievement,” such industry acclaim is quickly becoming second nature to Bench Brewing. 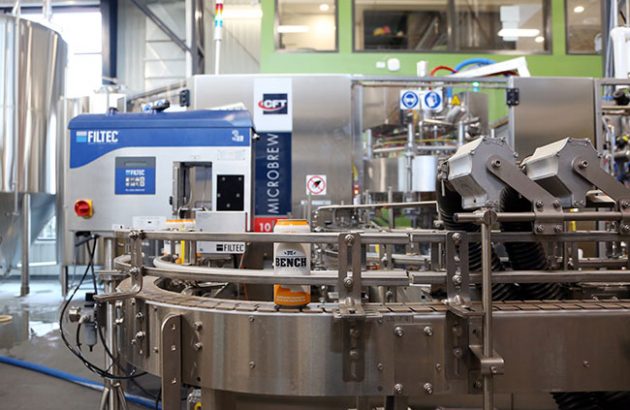 The CFT canning line at the Bench Brewing facility is equipped with an automatic Filtec container vision inspection systems that ensures precise filling of each 473-ml aluminum can filled and capped on the high-speed line.

“We’re honoured to be recognized for our beers around the world, and can’t wait to share more of what’s to come,” he states.

While Giffen says he understands practical reasons behind the industry’s trend to migrate to cans at the expense of glass bottles, he says that aluminum cans simply can’t match the efficacy of glass bottles when it comes to packaging sour and other specialty beers produced on the brewery’s Funk Side, such as the award-winning Plum Grove series named as a symbolic nod to the historic Maple Grove Schoolhouse.

“We produce these beers using our own in-house blend of yeasts to create approachable sours that get better with age as they bottle-condition,” he explains.

“We also use the same mixed-fermentation base and add whole local fruits to create award-winning fruit sours.

“True to our farmhouse style, we only use whole strawberries, plums, cherries and peaches sourced from our neighboring farmers within a five-kilometer radius.”

As Giffen points out, having two separate beermaking operation under one roof enables Bench Brewing to overcome the seasonal demand fluctuations that are part and parcel of the craft beer business, thereby maintaining a steady five-days-per-week production schedule throughout the year. 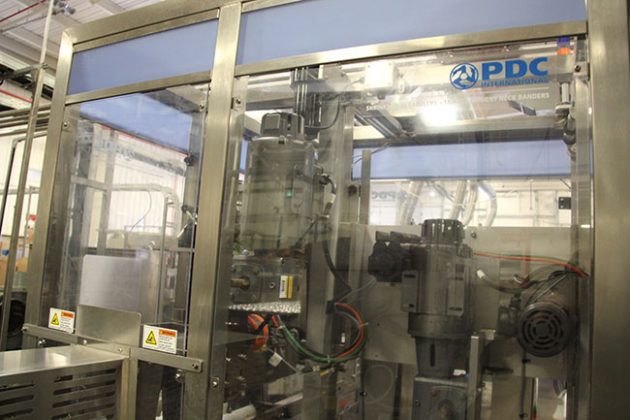 Custom-designed glass beer bottles, supplied to Bench Brwing by Bruni Glass, get a thorough rinse on the GAI MLE 881 BIER bottling line, supplied by Prospero International, prior to the filling and seaming process.

“Most breweries will see production slow down in the winter and peak in the summer,” he notes, “but we don’t really have a slower season at Bench.

“We take advantage of the time off-season to build up our Funk Side inventory, which takes several weeks or months longer than our Clean Side product to ferment and bottle-condition in our wood cellar.”

“Since startup, we have also added three more 100-hectoliter fermenters and one more 100-hectoliter brite tank,” Giffen notes, while also crediting a post-startup installation of the CFT rotary filler for significantly boosting productivity on the canning side of the business.

“Moving from a four-head inline canning line to a 10-head rotary CFT canning line which operates at 100 cans per minute has allowed us to cut down roughly 10 hours of run time and 16 hours of part-time labor per run,” he says.

“We no longer need an need an operator to watch the filler for fallen cans, low fills and bad seams,” he says.

“Moreover, the filler’s full oxygen purge, patented separate air return, counter-pressure filling, short transfer to the seamer, and under lid-gassing all contribute to the lowest documented DO (dissolved oxygen) oxidation levels in the industry.”

Similarly, the GAI MLE 881 BIER bottling line employed in the brewery’s Funk Side packaging area—manufactured in Italy by Prospero International s.r.l.—comprises a high-performance six-valve filler, an eight-head rinser and a single-head crowner that can reach output speeds of up to 1,500 bottles per hour, depending on beverage temperature and style. 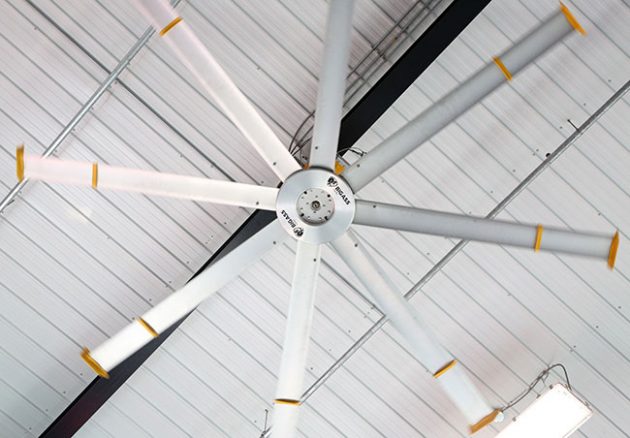 The busy brewhouse is outfitted with a number of large industrial fans, manufactured by Big Ass Fans Company, to keep the facility well ventilated and comfortable for the plant’s production personnel.

As with the CFT can filling line, the bottle filler’s compact, space-saving monobloc design provides plenty of opportunity for further automation of the case-packing and palletizing functions down the road once production volumes justify the investment, according to Giffen.

As for the branding aspect of its packaging, Giffen is happy to lavish praise on the company’s in-house graphic designer Julie Seo for creating the elegant, eye-catching graphic artwork for both the direct-printed cans and the self-adhesive paper labels placed on the glass bottles. 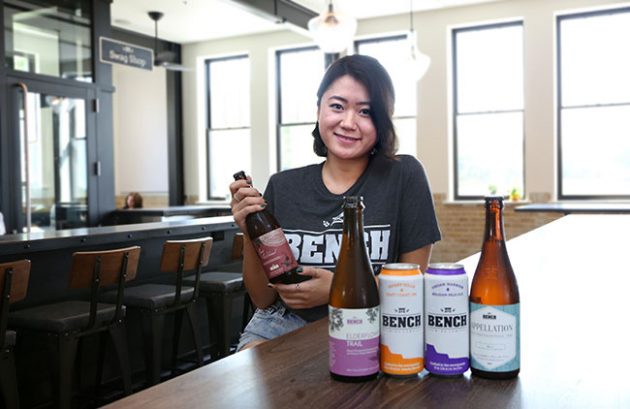 “We wanted to reflect our simple farmhouse approach in our brewing with our packaging,” Giffen explains. “Nothing elaborate or fancy—just clean, crisp and simple.

“Our beer is enjoyed equally by both men and women so, so we aimed to maintain an authentic style and culture that appeals to everyone.

“It’s simple and fun design with a nod to our wonderful home and agricultural roots,” says Giffen, noting the classy wine-inspired motifs running through the Grove series label artwork.

As Giffen points out, “We made a significant investment in packaging to ensure the best product possible.

“That means supplying best-in-class packaging to ensure freshness, high quality and consistency in all of our beers for the consumers in Ontario and elsewhere,” says Giffen, adding the company is already exploring possible new exporting opportunities in Europe and new Asian markets.

“Quality, consistency, experience and our relationships are all high priorities and something we work hard at every day to maintain,” Giffen proclaims.

“On the brewing side of things, we have strict SOPs (standard operating procedures) that help us to maintain a consistent product tank after tank.

“As we continue to learn and grow as a company, we have been finding efficiencies across the board when it comes to time management, product output and transport, in large part due to our improvements in process and communication.” 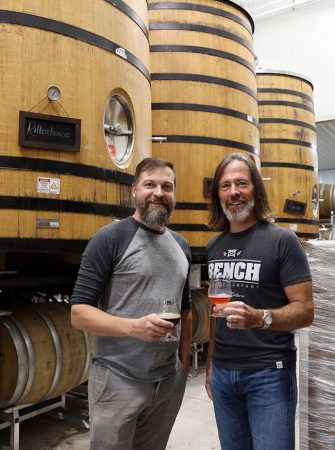 With Ontario craft brewers accounting for about an eight-percent share of the domestic beer market, Giffen says Ontario craft beer producers still have a lot of good opportunities for growth in coming years, despite flat overall growth in North America.

“There are other provinces and U.S. states where 12 to 30 per cent of the domestic beer consumed is craft beer,” Giffen points out, “so there is plenty of room to grow still.

“We believe that sours, especially fruit sours and barrel-aged beers, will continue to be a fast-growing segment around the world and now in Canada,” Giffen concludes,“making us very optimistic about the future.”