Since its inception back in 2013, Hamilton, Ont.-based Collective Arts Brewing has made a name for itself, thanks to its continued efforts in bridging together the craft beer and arts sectors with its wide selection of craft beer and uniquely designed cans.

Even though their eye-catching full-body shrinksleeve cans––designed by Mississauga, Ont.-based Spectrol Inc.–– do not need to be updated, it became evident to Collective Arts staff that some of their equipment did.

Back in 2018, the grassroots brewery was in the middle of installing a new filler, with the intention of producing more cans of beer.

The addition of a new filler also meant that Collective Arts needed to expand their current canning lines.

Simultaneously during this time, Collective Arts also came to the realization that they would need to install a modern, high-performance canning line that was worthy of the 65,000-square-foot plant.

With the brisk consumer demand outpacing the original canning line’s capacity to keep up, Collective Arts found itself in need of a better system to package its popular canned beer brands such as Lunch Money, Jam Up the Mash, Stranger Than Fiction, and their flagship IPA Ransack the Universe.

“Previously, the canning line we were using was much smaller,” says Graeme Bell, project manager for Collective Arts.

“To increase our capacity, we started looking at alternatives for this kind of conveyor.”

To get this done in the most efficient and expedient manner, Milton, Ont.-based Merley Chains Ltd., who are the Canadian distributors for conveying system specialists Regal Beloit and their System Plast brand, were brought in to provide their expertise.

An importer and marketer of a wide array of chains, belts, sprockets, conveyor components and accessories, Brad Gillis, sales manager for Merley Chains, began to quickly survey the conveyor system and belt Collective Arts was using. 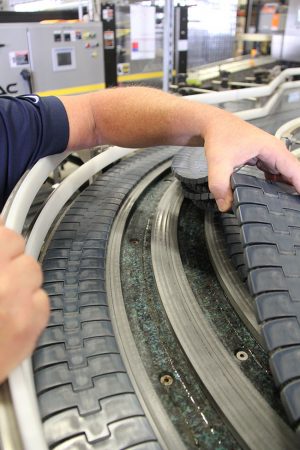 According to Gillis, the Toptrac magnetic corners do not need to be removed, and instead has wear strips that are easy for operators to remove when it is worn.

“Collective Arts had a lot of used conveying equipment that were in need of repair and refurb,” recounts Gillis.

“They had a mishmash of different types of chains and belts––there was some with stainless steel, and some with plastic.

“New conveyors had to be built to expand the line to accept the new higher filling capacity.”

After assessing what the best possible option would be for Collective Arts, Gillis recommended System Plast NGE Plastic chain & Modular belt on the complete line from start to finish, with sections of the conveyor built by Galick Packaging.

“Typically in this kind of environment at Collective Arts Brewery, they are running cans of beer and previously had to reduce friction on the conveyor chains” Gillis explains. “The NGE system is able to run the cans dry without lubrication and the benefits of that are eliminating the costs of lubrication, reducing the amount of water used and it also reduces wear and tear on surrounding equipment by keeping things dry.”

Asides from less maintenance, other benefits to the presence of the System Plast NGE include cost savings, an increased wear life, as well as an enhanced and safer working environment. 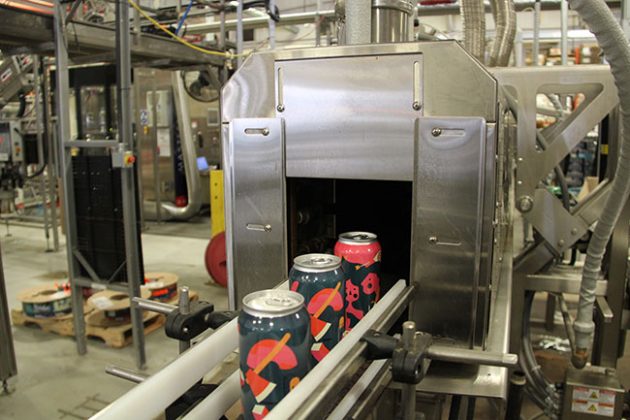 A state-of-the-art R-300 shrinksleeve labeler supplied by PDC International Corp. has been engineered to open and form the sleeve into various shapes and forms around the cans of craft beer.

The many advantages of the System Plast NGE’s presence were not lost on Bell.

“We chose this System Plast conveyor because the alternatives of this machine were superior and it did not require any kind of lubrication,” Bell says with confidence.

“The System Plast conveyor is a huge factor in the overall improvement of the line.”

In addition to the System Plast NGE material, Collective Arts was also supplied with a magnetic chain and Toptrac magnetic corners for the curved sections of the conveyor.

According to Gillis, these are vital components to the overall operation.

“The magnetic chain retention allows you to lift the chain out of the tracks for cleaning and maintenance without having to take the chains apart,” Gillis elucidates.

“The Toptrac magnetic corner system is new from System Plast and offers the best corner track solution in the industry.”

As a fairly new design, the biggest selling point of the Toptrac magnetic corners was its ease of maintenance and hassle-free care. 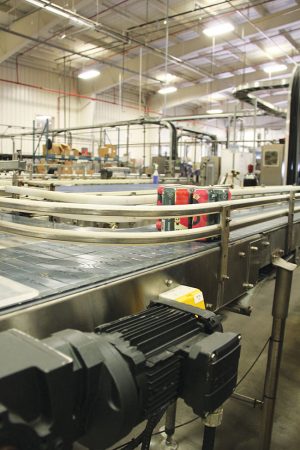 The System Plast NGE conveyor relies on a SEW-Eurodrive motor for optimal power distribution to move the cans of beer up the line.

Gillis explains that in older magnetic tracks, when a magnetic corner needs to be maintained and replaced, trained mechanics have to remove the whole corner and change it over.

Thankfully for Collective Arts, the Toptrac provides them with a much more manageable upkeep solution moving forward.

“Before installing the Toptrac, operators would have to shut the brewery down for several hours get a mechanic to come and remove the corner, put a new one in and then put the corner back into place,” Gillis explicates.

“With the Toptrac, the corner never comes out.”

“It is a solid magnetic corner with wear strips, so when the worn wear strip wears out and replace it with new ones in as little as ten minutes.”

Gillis emphasizes: “Once the corner track is installed, you never have to take the corner out again––you just replace the wear strip once they wear out.”

While this experience marks the first time that Collective Arts and Merley Chains have worked together, both Gillis and Bell agree that the experience was easy and laidback.

“Graeme took what I had to say very seriously, he asked a lot of questions and went forward with my suggestions,” Gillis shares.

Bell was not only pleased with the quick service and readily available advice that Gillis provided, he was also pleased that the addition of the System Plast NGE and Toptrac has meant less calls for maintenance and machine breakdowns.

“Brad and I have actually not seen each other in a year because we have not had any problems with the system since the installation,” Bell shares, “and in this case, that is a good thing!”