With the summer commemorations of 100-year anniversary of the start of World War I (Great War) providing a timely sobering reminder of the ultimate sacrifices by thousands of young Canadians who perished in the brutal four-year conflict, Ontario-based Diamond Estates Wines & Spirits is keen to keep that sense of patriotic pride alive for years to come with the release of two new wines paying fitting homage to the country’s war-time efforts.

Launched last month across Ontario, Manitoba and Alberta, the 750-ml bottles of 1914 Honour white and 1914 Valour red varietals represent a somber departure for one of the province’s leading winemakers—operating several large wineries and vintners in the Niagara region—which is better-known for its celebrity-endorsed vintages such as Dan Aykroyd and NHL Alumni wine series.

“These new wines were developed specifically to recognize and celebrate the achievements of the generations who served and continue to serve in Canada’s military,” says Diamond Estates president and chief executive officer Murray Souter.

Paying a tribute to both the 100th anniversary of the Great War and the 150th Anniversary of Confederation—initiated by the historical 1864 Charlottetown Conference that paved the way to Canadian Confederation in 1867—both wines are currently available in 750-ml glass bottles, sporting elegantly attractive labels designed by the Toronto-based graphics agency Brand Muller and in the nine-liter bag-in-box packaging formats for the foodservice industry. 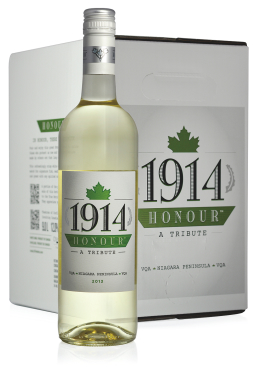 Diamond Estates says it will donate 50 cents from the sale of each bottle sold through LCBO (Liquor Control Board of Ontario) and other provincial liquor boards to the True Patriot Love Foundation, with the aim of raising $50,000 by the upcoming Remembrance Day celebrations on November 11, 2014.

Established in 1955, the not-for-profit organization funds a variety of programs in mental health, physical rehabilitation, family support and veteran transition that address the unique challenges related to the impact of military service.

“The LCBO has always been a great supporter of charitable causes and they were very receptive to helping us promote this effort and the many promotional activities leading up to Remembrance Day,” Souter states.

“We will be working tirelessly to get these wines into the hands of Canadians in every province.”

According to Diamond Estates brand marketing manager Peter Toms, the company plans to make both labels a permanent part of its product portfolio, rather than a one-off, limited-time release.

“This is a whole new brand that we are very proud of and that we feel has real staying power to it,” Toms told the Canadian Packaging magazine.

“We are confident that all Canadians who try it will appreciate it both for its message and its approachable taste profile that can be enjoyed at any occasion,” says Toms, noting that the company fully intends to extend the brand’s geographic reach nationwide.

Adds Diamond Estates vice-president of winemaking Tom Green: “The 1914 Honour is a refreshingly crisp white wine, while the 1914 Valour is a bold and mouth-filling red [and] either wine can be readily enjoyed either on their own or with food.”