Terracycle and OfficeMax go for coffee

Widely loved by consumers for their convenience, and just as widely reviled by environmentalists for their allegedly excessive carbon footprint, the single-serve coffee capsules—still commonly referred to as K-Cups after their original inventor Keurig—have the coffee industry working furiously to develop a workable end-of-life solution to prevent these hard-to-recycle, multi-material mini-pods from ending up at landfills across North America in their multiple billions year after year.
And while it may not quite be the green silver bullet the coffee industry would love to see right now, a new pilot recycling initiative just launched by TerraCycle Canada and leading office supplies distributor OfficeMax Grand & Toy is certainly a step in the right direction.
Under the program—for now limited to a trial run in southern Ontario—OfficeMax Grand & Toy will offer its customers one of three specially-designed recycling boxes to collect all the discarded K-Cup capsules at their offices and ship the filled boxes directly to TerraCycle.
Widely acknowledged as one of the world’s leading “upcyclers” of waste products, TerrCycle uses a proprietary process to separate all the K-Cup components (cup shells, lidding, filters, etc.) to make the leftover materials suitable for manufacturing a broad range of useful new products—from plastic carry bags and pencil cases to park benches and outdoor garbage bins.
“At OfficeMax Grand & Toy, we believe that each and every person has a responsibility to do their part to better the natural environment that we all share,” says OfficeMax Grand & Toy’s sustainability manager Serguei Tchertok. 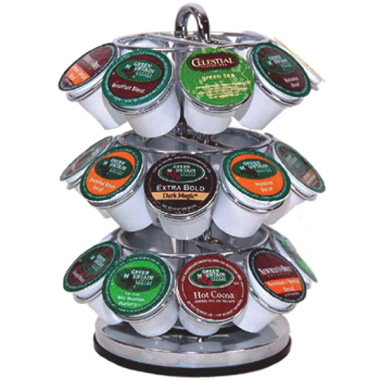 “In line with this philosophy, we embrace environmental responsibility across every facet of our business, and we foster it through unique, progressive programs such as this,” says Tchertok, adding that K-Cup Packs are one of the company’s most popular coffee products.
“We launched this program based on the stakeholder feedback that we received from our associates, suppliers and customers, who have identified waste and recycling as our most important sustainability issue,” he adds, pointing out that OfficeMax Grand & Toy, an affiliate of global office products provider Office Depot, Inc., is the first retailer in Canada to get involved in the recycling of K-Cup capsules.
Resembling a compact-footprint filing cabinet in shape and size, the TerraCycle K-Cup Recycling System boxes are available in small, medium and large sizes, with the final price of each option ($52.99, $96.99 and $136.99 respectively) also covering the cost of a pre-paid shipping label to send the filled boxes directly to TerraCycle for processing.
(See full pricing and purchasing information at www.officemaxcanada.com/terracycle)
Says TerraCycle Canada’s general manager Nina Purewal: “TerraCycle is thrilled that OfficeMax Grand & Toy has partnered with us to launch Canada’s first K-Cup Packs retailer recycling program.
“Their leadership in helping us eliminate waste speaks to their commitment to sustainability.
“We are excited to be able to offer a recycling solution to this wastestream problem to Canadian consumers,” says Purewal, adding that a successful pilot project in southern Ontario would set stage for the program’s nationwide rollout.