On October 12, 2016, Balluff Canada held an Open House at its Mississauga facility to celebrate 18 years as a subsidiary of Balluf Inc.

To celebrate 18 years since Balluff Canada Inc. first opened its doors in Mississauga, Ontario, in May of 1998, the company held an Open House event to customers, media and staff, attended by Canadian Packaging magazine.

Originally established as a subsidiary of Balluff Inc. in Florence, Kentucky, Balluff Canada president Norm Clarke has grown the company from himself as its sole sales person, to an entity with a flourishing presence in the automation market in Canada.

This year, the investment in a newly renovated and expanded facility was celebrated with a grand opening ribbon-cutting celebration on October 12th (Balluff Canada Inc.. 2840 Argentia Rd, Mississauga, ON L5N 8G4, Tel: 905-816-1494)

Along with presenting Balluff Canada’s modern, revamped state-of-the-art facility, Hermle, introduced the new face of the Balluff brand. He shared the meaning of the revised corporate image as well as the company’s direction for coming years. 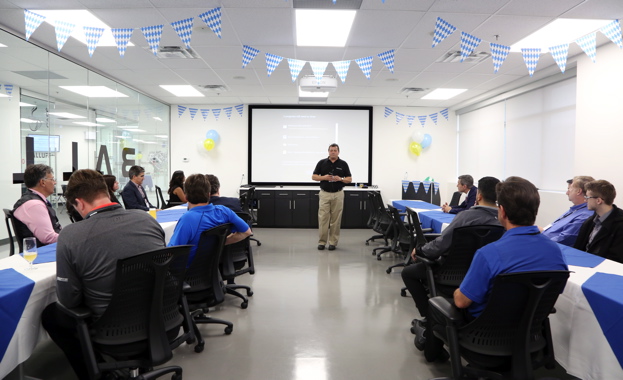 ‘Steady progress in the interests of the customer’ is name-of-the-game for the family-run company Balluff. The new brand images, as well as the modified slogan “innovating automation”, highlight this alignment both in a visual and communicative manner.

Modern, dynamic, and clearly-structured, the Balluff brand represents the company as being open, modern, and future-oriented. The new logo and slogan systematically reflects the corporate commitment to their core values. For instance, openness, commitment and progress are expressed in the design elements. And in the tradition of Balluff, huge importance is attached to the values of sustainability, reliability, and quality. The Balluff logo therefore remains constant in its basic values and open to the future. The new branding is timely and fitting of the emerging fourth industrial revolution (a.k.a. Industry 4.0), which reinforces Balluff’s mission towards remaining a global leader and competitor.

With an established presence in the Canadian automotive industry, Balluff’s commitment to the Consumers Goods industry is clearly more visible as the continuous breadth of products evolves to address  the needs of the packaging, pharmaceutical, and food & beverage industries. Balluff partners with packagers to develop solutions to improve manufacturing automation, which allows them to implement their quality requirements and those of their customers.

Company information can be found at www.balluff.com.