Straight to the point

Some companies just get it. Rather than merely being a jack of all trades and master of none, StrongPoint Automation Inc. is the sort of company that would much rather focus on what it does best—developing leading-edge, high-tech solutions for customers in the CPG (consumer packaged goods) and other industries requiring high-performance robotic and conveying systems to optimize their own manufacturing and packaging processes. 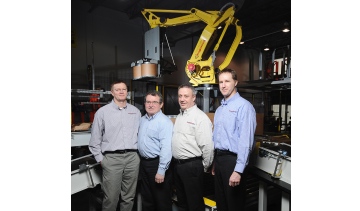 Some companies just get it. Rather than merely being a jack of all trades and master of none, StrongPoint Automation Inc. is the sort of company that would much rather focus on what it does best—developing leading-edge, high-tech solutions for customers in the CPG (consumer packaged goods) and other industries requiring high-performance robotic and conveying systems to optimize their own manufacturing and packaging processes. Founded in 2007 in Cambridge, Ont., the feisty upstart not only managed to grow its way right through the thick of the nasty recent economic recession, but also build itself a glowing reputation in industry circles as a highly knowledgeable, no-nonsense supplier of quality automated production systems that really knows its stuff.

Currently operating out of  a well-equipped, 10,000-square-foot assembly and testing facility with 15 full-time employees, the company has been executing an average of just over 20 projects over the last couple of years, according to StrongPoint president Warren Tait.

“We’re not a huge company, but we are well-designed to handle customers both big or small, complex or other, and we’re always looking for new customers and business,” Tait told Canadian Packaging during a recent visit to the facility. “But the big thing is how we have structured ourselves.

“You can’t be good at everything, you have to streamline, which is how we came up with our company’s name: knowing what our strong points are.”

Having acquired extensive industry experience while in employ of another automation systems supplier, serving primarily the food-and-beverage industry, Tait says he has no regrets about venturing out on his own, along with a few other like-minded, entrepreneurial automation experts boasting solid, hand-on knowledge in mechanical design, electrical design and engineering, and system design and testing.

“We wanted to work with conveyors because it is a huge market—estimated to be worth from $50 million to $100-million a year in Ontario alone,” Tait relates. StrongPoint Automation designed the end-of-arm-tooling used on this FANUC M-410iB robotic system for handling payload weights of up to 300 kilograms.

“We also wanted to go into robotics because, quite frankly, robotics are the future, and the future is now,” says Tait, noting that the two technologies are highly complementary, with most industrial robotic systems being integrated to some extent with one conveying system or another to provide a total solution.

Supplying a comprehensive offering of conveyors—including mat-top, tabletop, processing belt, side-grip, sanitary, roller-case and pallet conveyor systems—StrongPoint now markets its design and integrations services across Canada and throughout the northeastern U.S., he relates, attracting customers from across a broad range of food-and-beverage, bakery, confectionary, pharmaceutical, chemical and other consumer products industries.

According to Tait, one of the company’s core strengths and competencies is rooted in its ability to integrate robotic systems manufactured by FANUC Robotics into custom-designed, high-performance automation solutions—covering pick-and-place; case-, tray- and carton-packing; and palletizing and depalletizing applications—for food-and-beverage companies.

As StrongPoint’s director of sales Drew Cameron recalls: “Within that space, we needed to run four lines—with three running at any time—to a single robot handling the palletizing of bags, drums and cases simultaneously.

“We knew that we would also need to automate the inserting of slip sheets and bottom trays, while also squeezing in an automatic pallet magazine and a pallet handling system.”

According to Cameron, the customer needed to palletize multilayered, plastic-lined kraft paper bags weighing 50 pound each at the rate of five bags per minute, as well as 50- and 100-pound cylindrical fiber drums at three units per minute. A partial overview of the conveying and robotics solution recently designed and assembled by StrongPoint.

“It was quite the challenging design set-up,” says StrongPoint’s vice-president of automation Ed Janssen, “but where there’s a will, there’s a way.”

As an authorized FANUC integrator, StrongPoint knew it already had the perfect robotic system to get the job done for its client.

Marketed as the latest-generation palletizing industrial robot, the M-410iB is a high-performance, four-axis, electric servo-driven robot designed for high-throughput applications, with its small footprint and a fully-integrated controller package making it a perfect fit for the client’s floorspace requirements.

“This FANUC robotic system is engineered for precision, high-speed/high-payload operation, while at the same time is user-friendly and owns a superb track record for reliability,” states Tait.

“That’s really why we only offer FANUC products to our customers—we feel they deserve to have the best robotics equipment on the market.”

As for the control software, Janssen explains that the system uses FANUC’s PalletPRO off-line validation software for the building, debugging and testing applications, and when a customer is satisfied, it can be downloaded via Ethernet to the robotic system that uses the PalletTool software, along with FANUC’s  Collision Guard software package with a Dual Channel Device Net Interface. Designed and built by StrongPoint, an automatic pallet magazine uses the muscle of an SEW-Eurodrive motor to hold up to 12 skids in their pre-prgrammed positions.

According to Janssen, the Compact Logix PLC (programmable logic controller) with the Allen-Bradley PanelView Plus 1000 operator platform provide a seamless package when combined with the PalletPRO software.

All of the StrongPoint peripheral equipment is controlled through the use of SMC Corporation of America’s DeviceNet nodes, Janssen points out, whose I/O (input/output) system significantly reduces system installation and startup times, while also making diagnostics and troubleshooting a breeze.

Janssen says the infeed bag conveyors that move the product to the robotic palletizer use SEW-Eurodrive motors to control the line, employing multiple accumulation zones prior to the pick area for controlled product back-up.

The supplied case roller conveyor systems were designed to facilitate multicase pickinga, with the custom-designed EOAT picking up cases, drums and boxes as the product is fed via the conveyor lines, with its servo-driven motions accommodating infinite positioning to adjust to current and future product geometry. Powered by a Baldor motor, the fully-automatic PCTA-2100 turntable stretchwrapper from Phoenix Innotech can wrap up to 35 pallet loads per hour.

“We built it to eliminate any mechanical adjustment for product changeovers and we also made it to be strong,” points out Janssen. “While the current application only calls for a 100-pound maximum payloads, it was designed to handle a combined tool and product payload as heavy as 300 kilograms (661 pounds).”

The system was also designed to accommodate the insertion of either a slipsheet or bottom tray—depending on the product being readied for transport—with a custom-made automatic slipsheet/bottom-cap inserter designed by StrongPoint.

“For the bags, the customer will use the bottom caps, while the slipsheets are the order of the day for both drums and boxes,” explains Cameron, adding the system provides three palletizing stations: one dedicated to bags; and the other two accommodating bags, drums and boxes. Festo pneumatics are used to pick up slipsheets for insertion between layers of drums and boxes during palletizing.

Once a pallet is loaded, it is conveyed to a PCTA-2100 automatic turntable stretchwrapper—manufactured by the Laval, Que.-based Phoenix Innotech—that can reach throughput speeds of up to 35 loads per hour, depending on the load size, wrap pattern and various safety options.

“The entire end-of-line system we’ve designed and built for this client was done on time,” says Tait, “although the client did ask us to delay delivery until other auxiliary equipment was in place.

“We provided separate safety zones for the caps, sheets and the pallets that allow the client multiple areas of access to the main palletizing cell, without the hassle of shutting down the system infeeds or the FANUC robot palletizer.”

According to Janssen, all of StrongPoint’s systems are fully-equipped with dual-channel safety systems exceeding all the applicable safety codes. “Everything is double-redundant, including the FANUC robot, which is something not all robotic systems can offer,” points out Janssen. “We feel it’s a value-added safety feature the client deserves
and requires.

“All StrongPoint systems are assembled, tested here at our Cambridge facility following FAT (factory acceptance testing) to assure the customer is completely satisfied prior to disassembly and shipping,” states Cameron, adding the company also offers on-site testing, shop-floor training and classroom training services to all its clients.

While Tait says that StrongPoint makes every effort to turn its new clients into life-long customers, “As we continue to grow our business and build upon our repeat customers, our growth will come from new business and new opportunities.

“We can offer very high-level solutions that are also extremely economical,” Tait remarks, “but the bottom line is that companies that don’t buy the type of equipment we manufacture won’t be around in 10 years.

“Businesses need to automate to not only survive these days, but to thrive well into the future.”