In the U.S. fireworks market, there is no bigger name in sparkler production than Diamond Sparkler Company Co. In fact, this division of B.J. Alan Company, Inc.—founded in Chicago in 1922 as Acme Sparklers—today operates the country’s only remaining sparkler production facility in Youngstown, Ohio, which manufactures and distributes its line of sparkers primarily to the Phantom Fireworks chain of 60 consumer fireworks stores located throughout 13 states and in Puerto Rico. 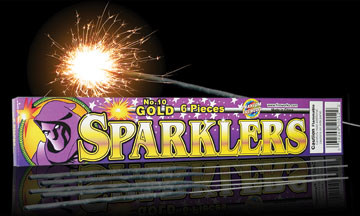 In the U.S. fireworks market, there is no bigger name in sparkler production than Diamond Sparkler Company Co. In fact, this division of B.J. Alan Company, Inc.—founded in Chicago in 1922 as Acme Sparklers—today operates the country’s only remaining sparkler production facility in Youngstown, Ohio, which manufactures and distributes its line of sparkers primarily to the Phantom Fireworks chain of 60 consumer fireworks stores located throughout 13 states and in Puerto Rico.

Employing 18 full-time staff and up to 40 temps during peak pre-holiday periods, the busy plant turns out an average of 48,000 Phantom brand sparklers of varied sizes and types daily, with some of its output also marketed directly to consumers and retailers nationally via catalog sales in those states where fireworks are legal.

The plant maintains a rigorous inhouse product testing program to ensure its merchandise meets or exceeds all the pertinent Consumer Product Safety Commission Requirements to maintain optimal product safety not only at the consumer level, but also during the sizzlers’ production, storage and distribution.

According to plant manager John Reiss, sparklers are made from a mixture of aluminum powder, very fine iron filings, barium nitrate, boric acid and dextrin, with iron used to generate the sparks.

Reiss explains: “Heat differences in the metal determine the color of the sparks; aluminum produces the silver-and-white flames and sparks; barium nitrate creates green colors in sparklers and helps to stabilize volatile elements; and dextrin and boric acid function as bonding agents for the mixture.”

This mixture is coated onto blank sparkler poles from from six to 36 inches long that are attached to specially-designed racks measuring from eight to 36 inches, and conveyed into an oven to be dipped several times into the sparkler mixture. The Diamond Sparklers plant’s packaging process fills six sparklers per box at rates of up to 180 boxes per minute.

Resembling a candle-making process, the whole procedure takes about an hour and 45 minutes to produce a finished sparkler, according to Reiss.

“Depending on variations in the mixture, we can produce sparklers that crackle, display various colors, or increase and decrease the amount of sparks and smoke,” says Reiss, adding that August is usually the time when production starts picking up in anticipation of the next Fourth of July celebrations, with all these orders needing to be manufactured, packaged and distributed to retailers by May.

“Although most of our product is produced for use on the Fourth of July,” he notes, “there is a growing demand for party sparklers to be used on occasions such as birthdays, anniversaries and weddings, where customers would require more sparks, less smoke, and ability to choose specific colors.”

While the plant had long mastered the art of making dazzling sparklers, it was not always so good at handling the great volume of product efficiently, Reiss recalls.

After baking, the sparklers are conveyed to a filler/boxing machine that puts six sparklers into each box, closes and seals it at a rate of 180 boxes per minute, after which a plant worker would manually transfer the closed boxes onto a conveyor for input to the shrinkwrapper.

The boxes needed to be stacked into columns of six or 12 units for wrapping, but due the high volume, the stacked boxes would often become displaced—inhibiting wrapping and slowing down the production line.

To resolve the infeed issue, Shuttleworth proceeded to engineer a solution that would completely automate the entire wrapper infeed process.

Using an off-the-shelf design customized for the plant’s needs, the infeed was set up inline with the filler/boxer machine to execute a perfect sequence of steps:

• place the boxes in a uniform position both linearly and height-wise for six- or 12-pack wrapping;

• index the packs into the proper space for precise wrapper positioning;

• control-release the packs into the wrapper.

The new infeed’s multilevel, continuous-motion accumulation conveyors stack the boxes to a specified stack height, two- or four-high, to set up the six-pack and 12-pack wrapping cycle downstream.

The stacked boxes then convey to a fixed stop and pushed with a shear-face pusher in a two-wide/three-high or a two-wide/six-high pattern into a Texwrap stretchwrapper that completely encloses around the packs, which then go into a heat tunnel for final sealing.

Upon exiting the heat tunnel, they are manually packed into shipping boxes and readied for shipment. The new infeed conveyors are equipped with Shuttleworth’s innovative Slip-Torque technology, which minimizes sparkler damage by creating low back pressure.

Should the line need to slow or stop, the conveyors can continue to take production from the upstream instead of stopping, says Zahm, explaining that a low-pressure accumulation buffer absorbs any irregularities in the production flow for a smooth, even flow on the packaging line.

“The Slip-Torque solution utilizes individually-powered rotating roller shafts and loose-fit rollers, which become the conveyor surface, powered by a continuous chain to control the drive force for the sparkler boxes.

“The size and weight of the boxes determine the driving force and roller selection,” Zahm notes. “When the boxes stop on the surface of the conveyor, the segmented rollers beneath the boxes also stop, generating low back-pressure accumulation, thus minimizing any product damage.”

According to Reiss, the new automated infeed system has enabled the plant to boost its output significantly, while increasing cost efficiency and reducing product waste.

“We now process close to 50,000 cases through our infeed system seasonally,” continues Reiss. “Whereas before we were processing 18 cases per hour, we are now handling 22 cases per hour—an 18-percent increase in throughput … and we also reduced one full-time manual labor position.

“The Shuttleworth system has really increased our production,” Reiss concludes, “while also saving us a good bit of money.”