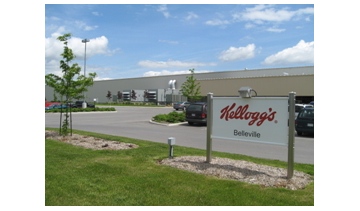 Kellogg’s Canada—headquartered in Mississauga, Ont.—has announced the creation of 48 new jobs at its Belleville facility thanks to the addition of a new $43-million production line.

First opened in 2007, the 105,080-square-foot, $100-million Belleville plant was the first new facility opened by Kellogg anywhere in North America in over 20 years.

The new production line will continue Kellogg’s tradition of utilization of advanced food-manufacturing techniques to ensure it remains among the most sophisticated in Kellogg’s worldwide operations.”

The Belleville plant currently produces Kellogg’s Mini-Wheat cereal, but with the new line expansion, the plant will add Bran Buds and Kashi Heart to Heart cereals.

The Belleville plant has a strong commitment to, as the facility design has a high R-value for energy savings using energy-efficient systems such as: energy-efficient lighting; high-efficiency equipment components and design; high-efficiency boilers; and the reduction of water usage and waste-water effluent. The office structure is actually built using recycled materials.