The Legacy Of Rings Around The Collars

A monthly look at some of the hits and misses in the packaging world from the viewpoint of Joe Public, Canadian Packaging magazine’s revolving columnists. From the June 2018 issue.

If you’ve ever done an Internet search on the environmental impact of plastic six-pack rings, you would be shocked by the calamities they have caused, with images of heart-wrenching scenes of all sorts of wildlife caught up in the refuse of our obsession with convenient living. But even long before the Internet arrived on the scene, noted environmentalists had decried the use of these heinous plastic rings, which first appeared in the summer of 1960 courtesy of packaging giant ITW Hi-Cone. Quickly deemed a packaging success for offering a simple and effective way to group and sell canned beverages, the rings became a ubiquitous feature of the beverage industry, despite coming in for heavy criticism from environmental groups for their horrific impact on marine wildlife by the late 1970s. The greatest shame may be the fact that all consumers have to do to greatly lessen the odds of these rings becoming a critter death trap is just make three simple cuts with scissors before discarding them for good, but it seems to be taking much too long for that message to sink through the critical mass of the consumer population. 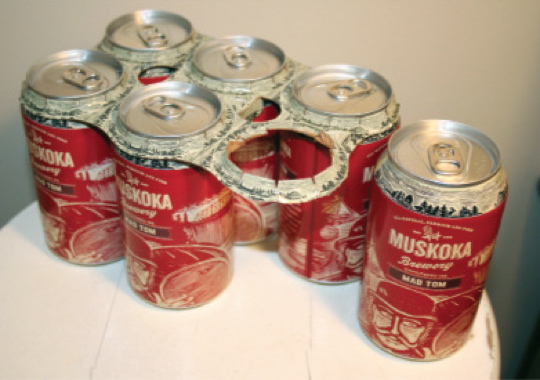 Although these days you can still find more than a few companies using the plastic six-pack rings, the relentless pressure from environmental groups and legislators over the years is clearly leading many beverage producers to find novel ways to show they care. Not surprisingly,
this eco-sensitivity seems to be more eagerly embraced by the up-and-coming ranks of the nature-touting craft brewers such as the Bracebridge, Ont.-based cottage country suds supremo Muskoka Brewery. Based in Bracebridge, the company claims to be the first in Canada to use the paperboard-based CanCollar multipack solution—developed by the Atlanta-based containerboard giant WestRock—for the colorful six-packs of its mischief-themed Mad Tom beer brand. This environmentally-sensible set of laminated paperboard rings is made primarily of renewable and responsibly sourced fibers, it’s claimed, which have been tested to withstand the rough and tumble world of the beer supply chain. The CanCollar utilizes a special printable clay surface to allow brands to differentiate themselves with an extra touch of creative fare, which Muskoka happily leverages to full effect with some catchy sketch work depicting the relaxed landscapes of local cottage life—the very environment the brewer is so keen to preserve. The company also spruced up the brand’s package design with the addition of more cottage scenery to the top portion of their 355-ml and 473-ml cans, doing an outstanding job of marrying the product to the packaging and finding new ways to highlight not only their Mad Tom offering, but for their entire core line of craft beers. I, for one, can’t wait to try them all this summer. 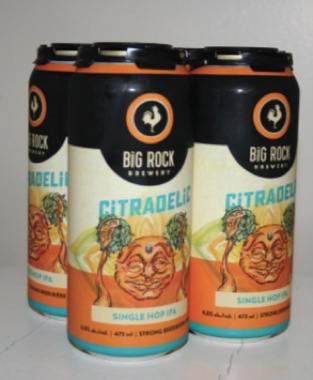 When Calgary-based Big Rock Brewery decided to open shop in Toronto recently with a new brewpub located directly underneath my workplace in the Liberty Village district of Toronto, I made two important discoveries. First, beer does not smell anywhere near as enticing during the brewing process as it does on a hot summer day on a patio: it is not pleasant, full stop. But getting beyond the stench of the brewing process, I’ve also discovered that those folks from Alberta sure know how to brew a fine craft beer. Having sampled a number of Big Rock’s offerings over time, I ultimately crowned the Citradelic Single Hop IPA as my chosen favorite—often prompting me to gleefully run down the stairs after work, like a schoolboy at the ring of the bell, to the beer store portion of the pub and load up. Making my trek home easier is the four-pack can carrier—manufactured by the Eugene, Ore.-based PakTech—outfitted with a handy little finger handle to provide an extra secure fit for all the standard 355-ml, 473-ml and 500-ml can sizes, while also making a satisfying audible click whenever you add or remove a can from the bunch. Offered in a generous variety of colors and sizes to outfit four-, six- and 12-packs, the 100-percent recyclable carriers are claimed to be made from 96-percent post-consumer resins. However great that sounds, I am even more impressed with how compact and eminently reusable these carriers are, greatly lessening the risk of finding their way into the environment to bring harm to my wildlife buddies.

I love reusable packaging. Whether it’s housing loose screws in an old Altoids mint tin or wrapping electronic peripherals in a purple Crown Royal rye cloth-bag, I seem to have no trouble finding ways to reuse old packaging. So I was pretty upset when I lost my travel pack of
Band-Aid brand bandages marketed by the Markham, Ont.-based personal-care stalwart Johnson & Johnson Inc. I’ve been traveling the world with the same travel pack for years until then, refilling the contents when they’d run low, during which time the product label had faded, the plastic had yellowed, but the little contraption continued to work with admirable yeoman’s efficiency. Happily good design tends to stick around, so when I found the new-generation eight-piece travel pack in my local drug store, it was a relief to see that little of substance had changed. The slim clamshell design fully retains its original aesthetic appeal, and the pack’s ability to protect its important contents for many refills to come is truly beyond reproach. 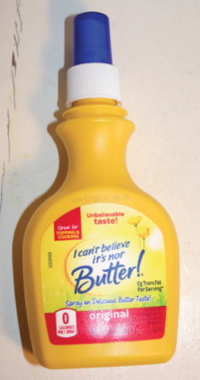 Sometimes new packaging can make you feel like a sucker, which was my initial reaction upon a happy recent discovery of the 226-gram of the I Can’t Believe It’s Not Butter brand of margarine produced by Unilever in Englewood Cliffs, N.J. Thinking of all the years I wasted, like a sucker, opening tubs, removing inner seals, and using a knife to spread margarine on my toast and, even more absurdly, doing the same for my popcorn, I was sold in a minute. Now a simple gentle press of the dispenser cap of the bottle lets me spread the joy and flavor of this famous cheeky-named butter substitute across a whole variety of foods, with brand reinforcement automatically pumped out with every squeeze of this elegant contraption, sporting all the familiar sunny graphics featured on the brand’s traditional tubs. 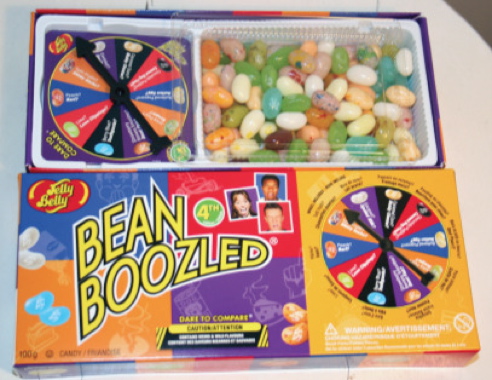 If spray-on butter substitutes are not weird enough for you, try taking a chance on the weird and wild flavors of Bean Boozled, the wacky game of risk and reward invented by the Fairfield, Ca.-based Jelly Belly Candy Company. The bean-shaped treats first got their 15 minutes of fame in the 1980s, when former U.S. president Ronald Regan publicly acknowledged having a fancy for them. But what started out with eight simple flavors has come a long way, and maybe even too far, with flavors like Moldy Cheese and Lawn Clippings. But that’s exactly part of the fun you get with the fourth-generation Bean Boozled package, which comes with 100 grams of Jelly Belly candies and a spinner. As the colorful package explains, players flick the spinner to point to one of the colorful beans contained in the tray next to it. Land on a white-and-yellow speckled bean and you may be rewarded with a Buttered Popcorn treat or, if it’s not your day, a Rotten Egg. According to the candy legend on the underside, there are 20 flavors: 10 tasty ones and 10 along the lines of Canned Dog Food or Stinky Socks, so it’s a 50-50 proposition. Perhaps Forrest Gump was a little premature in likening life to a box of chocolates; the Jelly Belly candies seem to be somewhat more true life in this corner, for better or worse.

Paul Pethick is a freelance writer and healthcare communications editor based in Toronto.