Toy brick manufacturer to spend $150-million to find an alternative to plastic.

As someone who probably has around 1-million LEGO building blocks – most of them underfoot, I found the news that Denmark-headquartered company was looking to move away from utilizing plastic as its main ingredient to something it considers more eco-friendly – well… intriguing.

LEGO chief executive officer Jørgen Vig Knudstorp says his company is concerned about the environmental sustainability of its products, especially its composition, how it is sourced, and what happens to it when it reaches the end of its life.

LEGO has a life-end? I’ve got my brother’s LEGO from 40 years ago… and while the white blocks have yellowed with age alongside myself, I haven’t seen the more modern bricks break as easily as they used to – a testament to the strength of the products made.

LEGO says that over the next 15 years it will invest $150-million to not only make the blocks better for the environment, but will examine ways to make its paperboard and plastic bag packaging more sustainable.

According to a statement from LEGO, which made over 60-billion bricks of many colors last year, the change could “significantly reduce (LEGO’s) impact on the planet.” 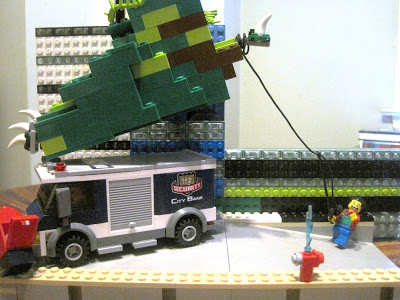 A LEGO diorama built by Andrew Joseph showing that going green can be difficult for all involved.

Previous forays into greening of the company include it working with wind power and cutting the size of its packages – though in all honesty, it could still shrink its packaging further without losing shelf space at the retail level—especially considering the large number of actual LEGO stores it has opened over the past five years.

Within its own shop, its only competition is with its own products.

I’ve actually talked with the LEGO big-figs (the real people) at a few stores, who —while not complaining—note that save moving to larger retail spaces, they already have a difficult time finding room on the shelves for the ever expanding range of product the company produces.

Smaller packaging, where possible, would work… and with the number of kits in my possession, I know that smaller packaging is very much possible for a lot of its pre-packaged goods.

Working with plastic, which is manufactured from oil resins, LEGO notes that higher costs for oil impact the pricing of its products.

Concerns over oil drilling in the Arctic also caused LEGO to end a 50-year partnership with Shell, this past October.

Being a self-confessed LEGO fan – of its products and the people who not only work at its shops, play lands and help centers – I only hope the new end product looks and feels like LEGO.

Somewhere thick as a brick,
Andrew Joseph
Image at the very top is a small diorama I did one weekend afternoon, depicting an exciting underwater scene with the surface remaining calm and serene.