To mark its Canada-wide transition to paper straws in late 2021 as part of its efforts to reduce single-use plastics in restaurants, McDonald’s Canada partnered with Kelowna’s The Rogerie and artists from across the country to turn a portion of its remaining plastic straws into something beautiful and unexpected

TORONTO, May 30, 2022 /CNW/ — McDonald’s Canada today revealed a series of original works of art commissioned from a cross-country group of Canadian and Indigenous artists who are using trays made with upcycled McDonald’s plastic straws as a canvas to display their artwork. Fifteen artists participated in the program and have created custom designs that reflect the artists’ diverse perspectives on sustainability and the environment. 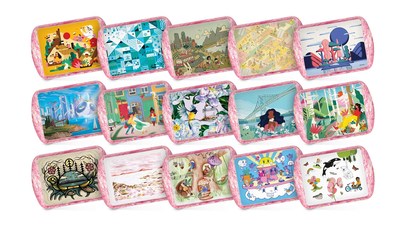 To mark its Canada-wide transition to paper straws, McDonald’s Canada partnered with the Rogerie to turn a portion of its remaining plastic straws into trays, serving as canvasses for art. Each tray features custom artwork specially designed from Canadian and Indigenous artists. (CNW Group/McDonald’s Canada)

In late 2021, McDonald’s restaurants in Canada transitioned to using paper straws from plastic straws, alongside the removal of other single-use plastics, namely plastic cutlery and stir sticks, as part of an ongoing initiative to meet McDonald’s global packaging commitment.

To mark the transition, McDonald’s Canada sought to give a new life to a portion of its remaining plastic straws. The Rogerie, a Canadian company specializing in making everyday products from post-consumer plastics, worked closely with the company to transform these plastic straws into a limited number of trays which have become a canvas for displaying art from Canadian and Indigenous artists.

The individually designed, limited edition trays will be donated to local Ronald McDonald House Charities® (RMHC®) Houses across Canada. Houses may keep the tray on display for the families to enjoy, or they may choose to auction off the tray for fundraising purposes. You can learn more about the artists, the inspiration to their specially designed artwork, and the making of the Last Straw trays here: http://mcdonalds.com/ca/en-ca/ourplanet/laststraw.html

“In the spirit of reducing waste being sent to landfill, we challenged ourselves to find an inventive and out-of-the-box way to give some of these plastic straws a ‘second act.’ Thanks to these artists, they can live on as something beautiful,” said Gemma Pryor, Senior Director – Canada Impact Team, McDonald’s Canada. “Removing single-use plastic straws from restaurants is just one of the initiatives McDonald’s Canada has undertaken. From reducing napkin size by twenty per cent in 2019, to trialing an electric vehicle as part of the supply chain distribution fleet earlier this year, we’re continuing to explore opportunities to make important changes in the Canadian system.”

McDonald’s Canada is committed to McDonald’s global goal to source 100 per cent of its primary guest packaging from renewable, recycled or certified sources by the end of 2025. Removing plastic cutlery, stir sticks and straws will remove approximately 700 tonnes of plastics from the Canadian system annually, approximately 370 tonnes of which are attributed to plastic straws.

In 1967, Canadians welcomed the first McDonald’s restaurant to Richmond, British Columbia. Today, McDonald’s Restaurants of Canada Limited has become part of the Canadian fabric, serving close to three million guests every day. In both franchised and corporate-owned restaurants, nearly 100,000 people are employed from coast-to-coast, and more than 90 per cent of McDonald’s 1,400 Canadian restaurants are locally owned and operated by independent franchisees. Of the almost $1 billion spent on food, more than 85 per cent is purchased from suppliers in Canada. For more information on McDonald’s Canada, visit mcdonalds.ca.