For legions of busy guys who just don’t have the time or patience to put their hair through a time-consuming, multistep grooming ordeal every morning, the PERT shampoo brand has long offered a quick, simple and highly effective way to shampoo and condition their hair in one easy step ever since its North American launch back in the early 1960s.
And while the brand’s straightforward two-in-one simplicity remains its main calling card, Canadian men have never been as spoilt for choice since the brand’s major new update earlier this year—including the launch of several new formulations targeting specific hair types and a bold package redesign featuring new upside-down green bottles with an ergonomic grip and a large cap to keep the container firm and upright throughout its use.
Created by the internal packaging design team of the El Paso, Tex.-headquartered personal-care products manufacturer Helen of Troy, the new bottle design aims to appeal to the active 25- to 44-year-old males “with a no-nonsense attitude” to life, work and play, according to the brandowner. 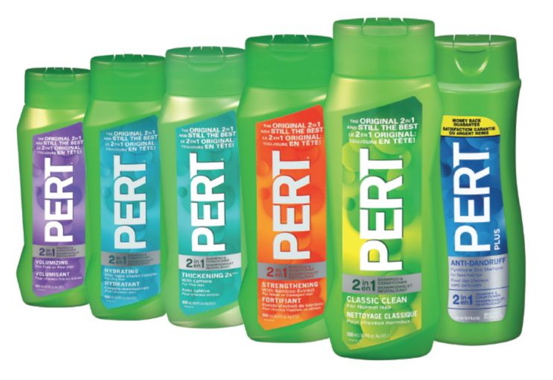 “We replaced the former curves with bold, sharp angular edges, which makes the bottle easier for men to grip and hold,” says PERT Canada brand manager Loren Kocis. “The bottle also has a non-slip design to make it easier to use in the shower, while the graphics were enhanced with sharper colors and a bolder, more prominent PERT brand logo.
“In addition, the previous PERT Plus brand logo was shortened to just PERT,” Kocis explains, “to be consistent with the whole message of simplicity of, ‘All you need is PERT.’
“It’s a bold masculine design that is simple and easy to use without losing history,” says Kocis, citing outstanding consumer feedback to the updated and expanded PERT product line.
Retailing across Canada in one-liter, 500-ml and 50-ml travel-size PET (polyethylene terephthalate) containers, the PERT shampoo line has also been expanded with several new formulations infused with special ingredients—including various vitamins, bamboo extract and caffeine, among others—to help guys get clean, hydrated, strengthened, thickened and volumized hair that best suits their image and style.
While the PERT Classic Clean formulation remains the brand’s bestselling product, according to Kocis, the four new varieties launched into the Canadian market this year are expected to broaden the brand’s appeal among the targeted demographic.
To that end, PERT Canada has recently teamed up with a rising Canadian MMA (mixed martial arts) star Elias Theodorou (aka The Spartan) to be its official spokesman through to the end of this year.
“Not only is he known for having the best hair in the MMA world,” says Kocis, “but he is also a modern, active male that perfectly represents our target market.” 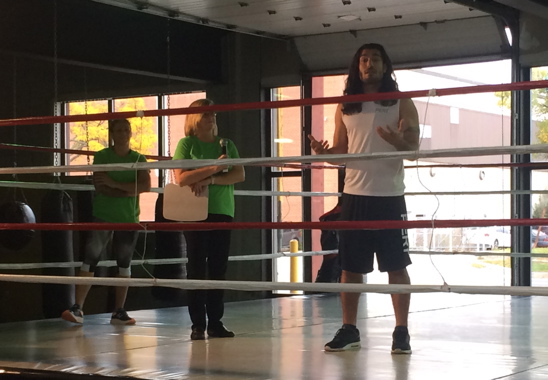 Despite only being introduced to martial arts at the age of 20, Theodorou has amassed a 14-1 record since turning pro, while also attracting a lot of publicity and exposure as a result of his dominant run on the televised The Ultimate Fighter Nations: Team Australia vs. Team Canada competition, where he was declared the inaugural ‘Canadian Middleweight Ultimate Fighter.’
In addition, The Spartan’s likeness has been featured on eight Harlequin romance novel covers, and he’s acted and performed stunt work in The Listener, Played and Netflix’s upcoming The No. 1 Contender, as well as appearing on Dragon’s Den and competing on The Amazing Race.
Says Theodorou: “I am really excited about this partnership with PERT Canada and couldn’t be more thrilled to be the official spokesperson for the brand—engaging in some exciting multiplatform opportunities across Canada over the next few months.
“The PERT brand’s new packaging is a sleek and edgy combo with a new bottle that now really keeps up with an active lifestyle—throwing punches in bunches with many new scents.”