Packaging helps preserve a 100-year-old fruitcake from the Scott of the Antarctic expedition, but other packaging may have helped play a role in the deaths of the explorers.

When it comes to long-lasting packaging, the industry doesn’t usually talk about decades.

A recently discovered cache of 1,500 artifacts found at Cape Adare, Antarctica include a fruit cake manufactured by famed British biscuit makers Huntley & Palmers that was part of the expedition undertaken by Scott of the Antarctic and his quest to reach the magnetic South Pole first in 1910.

The fruitcake was recently found by the Antarctic Heritage Trust in one of the huts used by Captain Robert Falcon Scott during his 1910-13 Terra Nova Expedition.

Scott and 54 men set aboard the ship the Terra Nova to try and reach the South Pole first, and set up numerous base camps along the way storing food and other items for the return journey.

Scott, Edward Wilson, Captain Lawrence Oates, Henry Bowers, and Lieutenant Evans set out from a base camp on the final leg toward their goal, reaching the South Pole on January 17, 1912.

Unfortunately for Scott’s team, Roald Engelbregt Gravning Amundson of Noway had beat them to the site 34 days earlier on December 14, 1911.

Defeated for the honor, the Scott expedition made their way back home, stopping at various caches to replenish supplies, but found that the natural elements had destroyed the tins holding heating oil… a much-required necessity.

After being trapped for days and days in a tent by a fierce blizzard some 18 kilometers from their next cache, the remaining party members died of malnutrition and frostbite on March 29, 1912.

Left in a cache untouched by the Scott expedition, the found fruitcake was made by the London, England-based Huntley & Palmers company, who also provided the expedition with emergency biscuits and other baked goods. 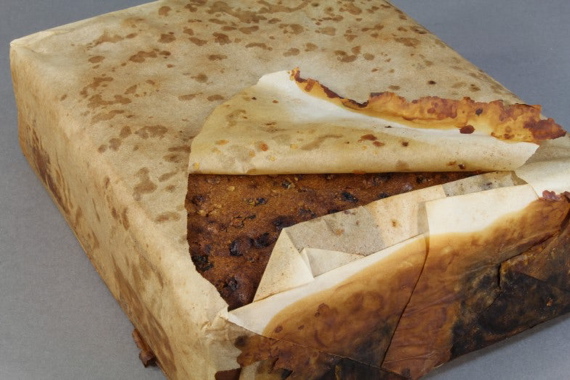 The fruitcake is being called “almost edible”, and is undergoing conservation efforts in New Zealand.

It’s not the oldest fruitcake on record, however, as there is one still holding strong and true in Canada, reportedly some 136 years old and going.

The fruitcake was wrapped in an intact paper liner, and visually the cake is in excellent condition (for a fruitcake). Researchers say it even smells edible – almost. 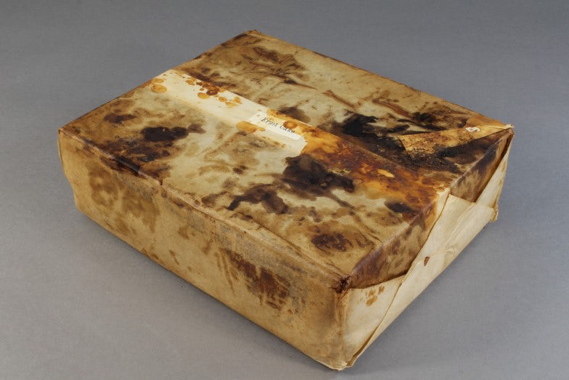 Apparently the fruitcake was considered a high-energy food, and is still something explorers take on current ice treks.

The outer-layer tin-plated iron alloy packaging, however, was in poor condition suffering corrosion from the buffering of high winds and cold temperatures (see image at top).

The paper label was also still attached to the tin, but had suffered much damage.

Along with the other artifacts brought back from Antarctica for study and preservation/conservation efforts, the fruitcake will eventually be returned to the original site to maintain its status as an Antarctic Specially Protected Area.

The tents and huts used by Scott et al in 1911, were originally constructed and left in place by Norwegian Carsten Borchgrevink’s expedition in 1899. They are considered to be the only remaining examples of the very first human settlement on any of the seven continents.

For this exploratory trek, packaging may have allowed a fruitcake to survive some 104 years, but with the faulty seals on the heating oil, it also played a role in the demise of Scott and his fellow seekers.

Images all courtesy of the Antarctic Heritage Trust