The miracles of science

Winning prestigious industry awards and widespread market recognition comes remarkably easy for the good hardworking folks at Nickel Brook Brewing Co., Burlington, Ont.-based craft brewer who seems to have decoded the art of winning down to science on many levels.

A well-established player in Ontario’s ever-growing craft beer market, the family-owned brewer’s penchant for focusing on the lighter side of science with catchy and quick-witted packaging graphics and brand names have enabled it to build up n exceptionally loyal and diverse fan base since packaging its first beer run back in 2005.

Founded by brothers John and Peter Romano, who earlier operated a ‘make your own beer and wine’ facility near downtown Burlington, Nickel Brook has enjoyed an exceptional winning run this past summer—picking up five trophies from the recent Ontario Brewing Awards competition in Toronto; three Canadian Brewing Awards at the national beer industry gathering in Halifax; and two bronze medals at the massive U.S. Open Beer Championship competition in Ohio, going up against more than 6,300 entries from around the world. 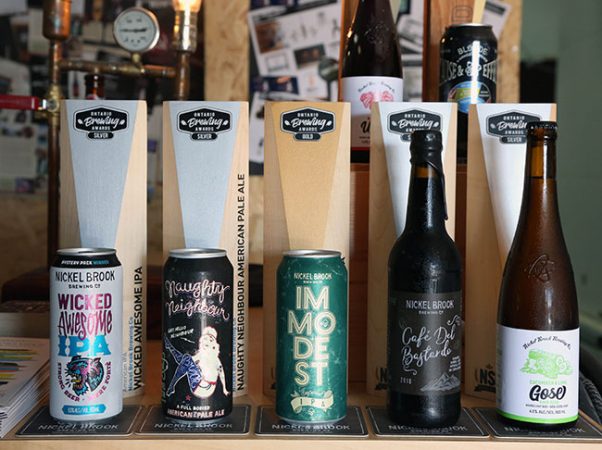 A sampling of some of the witty tongue-in-cheek brand names and fun graphics developed by Nickel Brook Brewing for some of its best-selling beer products.

All part of a day’s work well done, according to the company’s easy-going corporate sales and marketing manager Matt Gibson, who joined Nickel Brook about three years ago.

“We have a great reputation, which is why people are always willing to try new stuff from us,” Gibson told Canadian Packaging on a recent visit to the brewer’s busy 6,000-square-foot facility turning out an exceptionally diverse range of traditional beer styles and one-off seasonal sensations infused with all manner of fruit, spices and other surprising ingredients.

“We are always eager to experiment and be first in the market with new innovations like sour beers and barrel age beers—it’s all about having the willingness to try new things,” Gibson explains.

“People are always looking for something new and exciting to try, just like ‘foodies’ going to new restaurants every week to try out a new offbeat taco or an unusual fish dish, for example.

“Consumer are always looking for something new and interesting,” says Gibson, acknowledging the company’s popular light-hearted packaging designs as one of the main ingredients of the brewer’s ongoing winning run in market share and brand loyalty.

“People like to see fun creative artwork on their cans, alongside the fun names,” says Gibson, explaining the origins of the company’s trademarked logo consisting of a deftly stylized illustration of an atom, surrounded by orbiting electrons.

As Gibson explains, “Brewing is very scientific process, being all about temperatures, ingredients, measurements and fermentation, but there is also a strong element of magic to it that enables you to end up
an amazing end product.

“So essentially the atom graphic ties the whole since angle nicely into our brands to represent this miracle of science—a great-tasting craft beer.”

“There are over 270 breweries out there across Ontario, with at least 150 brewers in the LCBO (Liquor Control Board of Ontario) distribution system, so a consumer may well be looking at 50 to 60 different options when making their selection. 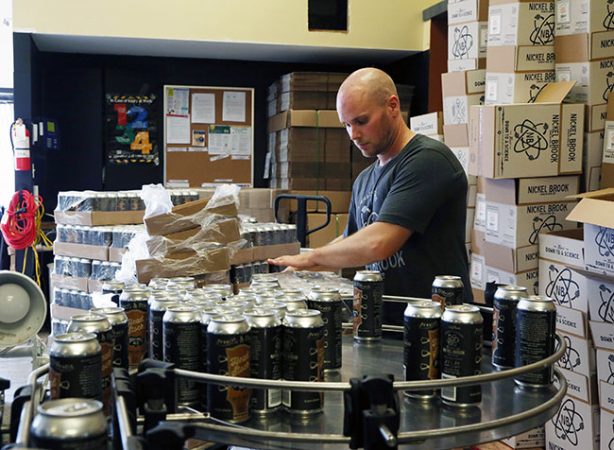 With space at Nickel Brooke’s current 6,000-square-foot production facility at a premium, the company is making plans to build a new larger facility that will not only give its employees more breathing space, but will also allow for introduction of new equipment to automate some of the tasks now performed manually.

“In this scenario, it’s only natural for the consumers to choose what catches their eye,” says Gibson, citing the brewer’s intensely engaging graphics and wording found on the 473-ml cans of core Nickel Brook
brands that include Head Stock IPA, Naughty Neighbour American-style Pale Ale, Cause and Effect Blond Ale; and the newly-launched Wicked Awesome IPA brand.

“We’re always working to keep our branding current and do new things,” Gibson says, “and we had a lot of fun with creating packaging for the Wicked Awesome IPA.

“It is bright, loud and almost borderline obnoxious,” he chuckles, “but it worked perfectly for this brand because it really comes across as cocky and full of itself, with badass panther tattoo graphics to boot.

For all that, Gibson says it is important not to overstep the boundaries of good taste with unnecessarily risqué packaging and marketing gimmicks.

“We actually used to pack a Russian-style imperial stout we called Bolshevik Bastard up to a couple of years ago, which included a picture of Joseph Stalin on the label,” Gibson recalls, “but eventually we decided it wasn’t an appropriate look any more, so we discontinued it.

“But although we stopped packaging that particular beer,” he points out, “we still make this recipe to use as a base for our four different Bastard series beers.”

As Gibson relates, “All the new product graphics to be stocked by the LCBO have to be submitted for their review to make sure they contain all the required legal information, proper ingredients, French and English text, no offensive imagery and so on.

“They’re usually pretty good about it,” he says, “but there are certain rules beer companies must follow.

“You can’t make any health claims, for one, you can’t encourage over consumption, and because you can’t advertise to children, you can’t use any cartoon character,” Gibson explains. 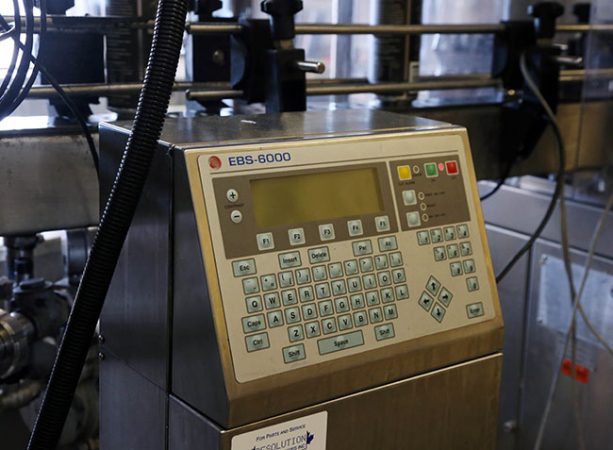 Manufactured in Germany by EBS Ink-Jet System, the model EBS-6000 series continuous inkjet printer provide the Nickel Brook canning line with a highly reliable and effective solution for labeling cans swiftly moving along the line’s conveyor without any direct contact.

For all of the company’s packaging pizzazz, Gibson says it would count for little if Nickel Brook was not able to produce consistently high-quality beer.

“Our high-quality is determined by the types of hops and the amount of hops we are using,” says Gibson, “which is definitely more than most other people.

“It may not be the most efficient way of using our ingredients, but it does provide for a better end product, so we’re willing to do that.

“In addition, our brewmaster Ryan Morrow has some special techniques and tricks of the trade he uses when developing new recipes,” Gibson adds, citing tremendous positive consumer response to the past summer’s introduction of several fruits-infused bottles beers that also include the award-winning Peach Uber Summer Beer.

“Our fruit beers and sours have allowed us to attract some of the wine and cocktail drinking crowd, preferring to try us over a familiar wine spritzer or an RTD (ready-to-drink) cooler.

“Beer marketing is generally not geared at female consumers traditionally,” he remarks, “but it seems rather silly to be mindfully ignoring over 50 per cent of the population.

“By creating those types of products we are hoping to expand our audience by literally having something for everyone,” Gibson states.

“Whether you want something hoppy, dark, boozy, sweet or sour, we got it all,” says Gibson, noting that over the course of last year Nickel Brook has sold some 18 different beer products through the LCBO distribution network alone.”

“In addition to being sold all across Ontario, we also export to China, Spain, five states in the northeastern U.S., and also to Quebec, most recently,” he says.

“Exporting is becoming more commonplace among Canadian craft brewers,” Gibson reflects, “so while Ontario remains our primary market, if we have extra capacity to spare and the opportunity presents itself, why not?” 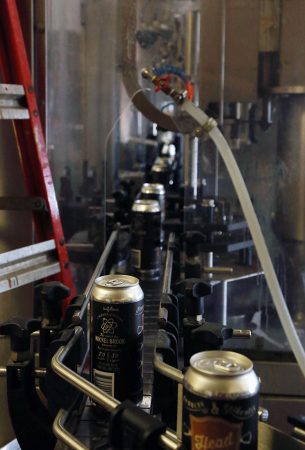 Freshly filled cans of the Head Stock IPA beer being swiftly conveyed towards the secondary packaging area to be placed into corrugated trays prior to being palletized for shipment.

Gibson says that Ontario’s fairly recent decision to allow for beer sales at select grocery stores has been greatly beneficial for Nickel Brook and many other craft brewers.

“The grocery channel has probably increased our sales by five to 10 per cent since allowing beer sales,” Gibson relates, “while enabling us to build good relationship with leading chains like Loblaw’s, Metro and Fortino’s, to name a few.”

According to Gibson, the ongoing industry-wide switch from glass bottles to cans will only continue to gather speed going forward.

“About 80 per cent of everything we produce is now packaged in cans, “Gibson says, “with bottles and kegs taking up about 10 per cent each.

“Our sales skyrocketed ever since we made a large-scale switch to cans some years ago,” Gibson says, “and that’s been the case ever since.”

Currently employing about 25 full-time people, Nick Brook pretty much maxes out its annual manufacturing capacity of 15,000 hectoliters, which
Gibson says positions the company as the seventh-largest craft beer supplier in Ontario.

Because this volume exceeds the Burlington plant’s output capacity, the company often has to rely on some other Ontario-based microbreweries to co-pack some of its production, but Gibson says the company has to build a new, larger facility in the near future.

“We are currently looking for a new location to bring everything back home in-house, probably in St. Catharine’s or close to it,” Gibson says.

“The hope is to have shovels in the ground next summer and to move into the new home two or three years later,” says Gibson, adding he’s looking forward to being able to increase various production efficiencies thorough additional automation investment and other process improvement that just can’t be implement in the existing confined quarters in Burlington.

“We will definitely be looking to increase efficiencies wherever we can,” he concludes, “but because at the end of the day the craft industry is really based on people and all the hard work that these people do, we will always have our people involved along every stage of our continued growth and evolution.

“It just a fact of science.”