One of the coolest things about making a living in the craft beer industry is that a brewer’s sheer scale and size is not the be-all and end-all indicator of how well a company succeeds in the marketplace.

If it was, then one would be a loss to explain the enduring longevity and industry-wide respect enjoyed cross Ontario by Black Oak Brewing Co., one of the province’s very fits craft brewers founded in 1999 in Oakville, Ont., by the company’s colorful and highly knowledgeable president Ken Woods.

Nowadays operating out of a modest 9,000-square-foot microbrewery tucked away at an industrial park in the west-end Toronto suburb of Etobicoke, the company is an embodiment of the notion of small being
beautiful—when done with true love and affection for the art and science of creating flavorful and memorable varieties of batch-crafted year-round beer varieties and seasonal favorites.

Employing 12 full-time people, the family-owned microbrewer has indeed done exceptionally well in a market that has changed beyond recognition since the company’s early days. 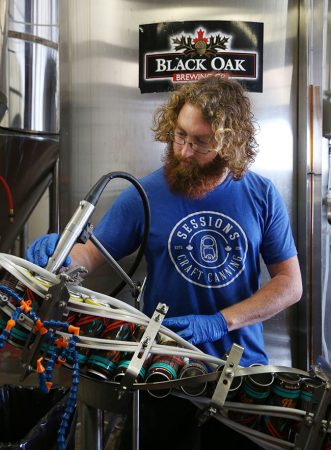 With many of the industry’s bigger players now boasting far greater production outputs and state-of-the-art machinery that Woods openly admits make his “envious” from time to time, he has never wavered form his original self-sustaining manufacturing principles that have helped establish the former biology university undergrad at Ottawa’s Carleton University as one of the industry’s most respected elder statesmen with a vast knowledge of the beermaking process, along with keen understanding of the ever-evolving marketplace trends.

Still using the same three-vessel 20-hectoliter brewhouse started up back in Oakville, manufactured by one-time brewing systems supplier ABC Manufacturing, Woods has effectively steered the company to steady growth in market share and penetration over the years, despite the limitations of the brewing equipment’s 3,000-hectoliter capacity.

“We are trying to raise some capital to automate some of our manual processes,” says Woods, “but our immediate priority is actually to automate our data collection system, which are taking up far too much of my time right now.

As a holder of the CMA (Certified Management Accountant) designation Woods acquired in his days in the corporate world before launching Black Oak, he is keenly aware of the urgent need to bring the company’s data collection capabilities up to date. 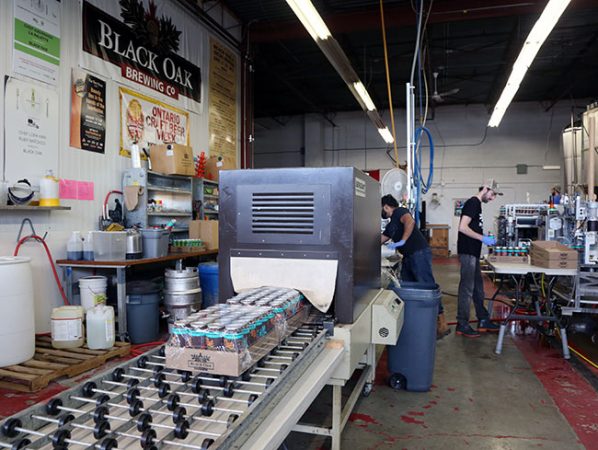 The Black Oak brewery uses high-quality pre-printed corrugated trays, supplied by the Toronto-based Atlantic Packaging Product Limited, to ship its canned products to markets in pack of 24 cans per tray, with the filled trays also shrinkwrapped in high-strength plastic film by a Sergeant shrink tunnel to maintain optimal load stability for the palletized loads during transport.

“With grocery stores becoming a new sales channel, and The Beer Store and the LCBO (Liquor Control Board of Ontario) constantly adjusting their rules to account for grocer sales, we now find ourselves being asked to send two or three cases to a retail location, rather than the five to 10 cases we used to deliver on one trip before.

“That’s been a huge change for us,” says Woods, adding Black Oak has contracted some third-party logistics suppliers to help cope with the new distribution challenges.

On the production side, though, the sturdy and well-maintained brewhouse—consisting of a mash lauten tank, a brew kettle and a hot liquor tank—is still putting in an honest shift after shift to enable Black Oak to produce up to 3,000 cans of beer on the specially-designated canning run days each Friday.

With canned beer products now accounting for 35 per cent of the brewer’s output—draught beer kegs still being the largest product segment with a 55-per cent share—those canning days are naturally critically important occasions when everything has to click together just right.

And so it does, time after time, thanks to the help of an innovative mobile canning service provided by the Mississauga, Ont.-based Sessions Craft Canning.

Founded in early 2015 by company president Jeff Rogowsky, Sessions Craft Canning is a thriving operator of mobile beverage canning services that beer and other beverage producers can call in at the time of their choosing to install a mobile turnkey canning line and have a two-person Sessions Craft crew start up the machine, complete a full run from filling to case-packing, and disassemble the line a the end of the day—leaving the customer with pallets of freshly-canned product ready to ship into the market.

“The mobile canning concept has been kicking around in the U.S. for quite a few years a few years now, but we were the first ones to bring it over to Ontario,” Rogowsky told Canadian Packaging in a recent interview.

Comprising a mobile depalletizer, a twist rinser conveyor, a high-accuracy filler with built-in seamer, and an inline EBS inkjet date-coder to apply the ‘packaged on” date during the twist-rinsing stage—the Wild Goose mobile canning line has provided Black Oak with virtually flawless service ever since Sessions Craft first approached the brewer about two-and-a-half years ago, Rogowsky recalls. 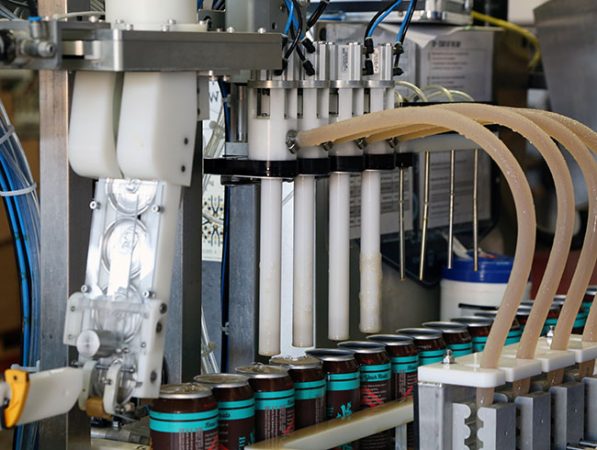 A close-up of the high-precision filling action taking place inside the four-head filling station of the Wild Goose mobile canning line running at line speeds of 38 to 42 cans per minute, with the line’s built-in seamer capping the cans immediately after filling.

“With most of our customers, it is hard for them to come up with the required capital to install an expensive canning line, a date coder, seamer and all the other many parts that come with it, especially when talking about equipment they only use as little as two to four times a month,” Rogowsky explains.

“We give them a fixed cost per can to come and fill them up for them, which helps the clients to focus on scaling up their brewery by installing more fermenters to brew more beer and other process improvements—letting us to take care of their packaging for them.”

For all intents and purposes, the Sessions Craft service takes care of all of Black Oak’s canning requirements, including the reliable supply of fully shrinksleeved cans—purchased in their naked “sliver bullet”
state from Crown Beverage Packaging and labeled at the Sessions Craft plant on a high-performance Aesus shrinksleeving machine.

“The canning line we show up with is typically superior to what many smaller brewers would be able to afford to start off with and moreover, they get a fixed price per can and full professional packaging service that allows the client not to worry about any of the problems associated with canning,” he says, “because we take all that stress off their hands.”

Says Rogowsky: “The whole team at Black Oak has been great to work with—they are a fun group of people who also happen to make very good beers on a consistent basis.

“Having been around since 1999, they have a lot of friends in the craft brewing industry, making it really cool to work with them.

“It is really a flagship client for us,” Rogowsky points out, “because so many people in the industry know them as one of the original craft brewers here in Ontario.

“They usually use us about once a week on average, with some variations depending on their production needs, and we usually package about 10,000 cans for them over a typical run, give or take a few.”

For his part, Woods says that the ongoing shift to cans from bottles is an irreversible trend in the craft brewing business.

“There have been some price increases for can due to the U.S. tariffs on aluminum,” Woods relates, “and there are possible issues of supply shortages, due to some beverage producers stocking up on cans inventory, but Sessions Craft has been very good in providing use with a reliable supply of cans.”

While glass bottles will always have their increasingly niche-like place in the craft brewing business, Woods says, “Can are just a more convenient product that today’s consumers want.

“People today are much more likely to buy five or six different brands of individual cans to try out and sample what’s out in the market,” he adds.

“It seems that today’s consumers like to build up a portfolio of their favorite beer—including fruit beer, spiced beer, fruit beers, smoked beer and so on— that they will choose based on the season or the occasion,” he says.

“Can offer them a good way to increase their beer knowledge and to diversify their beer palates.” 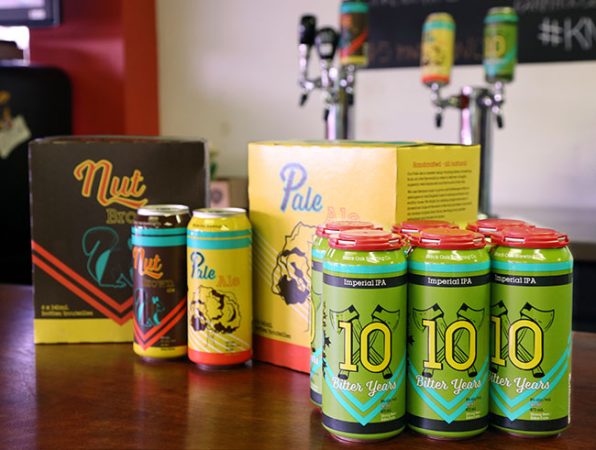 Woods relates that the company’s own beer range—including its flagship Nut Brown Ale, Pale Ale and the 10 Bitter Years Imperial IPA—is now retailed across a large par of the province from Ottawa to Windsor.

“Our Nut Brown Ale is one of our star bestsellers,” Woods notes. “It’s a very smooth, roasty dark beer with a distinct niche market appeal, but people who have tried it really seem to enjoy it.

As one of the original executive board members of the OCB (Ontario Craft Brewers) association, Woods is confident that for all the rapid growth recorded in Ontario’s craft beer industry in recent years, the best is yet to come.

“There are tons of new breweries opening up all the time, making this sector a very important job generator for the province’s economy,” he extols.

“But even though some of the bigger craft brewers have been growing at rates of 20 per cent per year, domestic craft beers as a whole still only account for only four per cent of the overall beer market in Ontario, compared to 20 per cent in British Columbia, Quebec and the U.S.,” he points out.

“To me that means we still have a lot of work to do to increase consumer awareness in order to drive more sales,” he says. “We have a huge beer market here in Ontario, but not that many people here really understand craft beer, relatively speaking.” 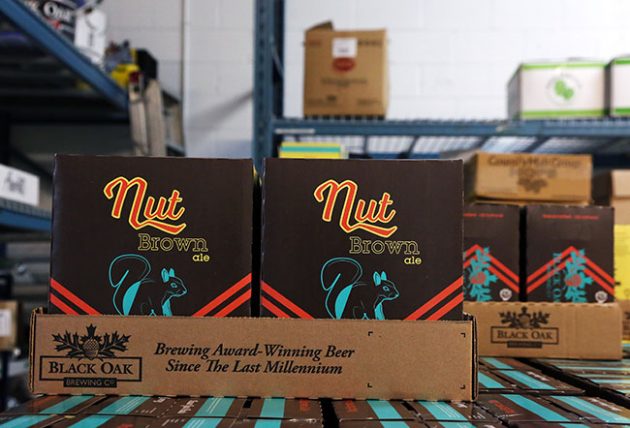 According to Woods, packaging will naturally play a critical role in the craft industry’s efforts to capture a bigger market share.

“We ourselves have just undergone a major graphic overhaul for the packaging of our beers,” he says, “with the aim of achieving a more classy look with our packaging presentation.

“Our older graphics worked well enough for the first 17 years or so, but with the new brewers coming out with really catchy graphics and names, we knew we had to revamp our packaging.

In a similar vein, Woods has nothing but high praise for the reliable superior service he receives from Sessions Craft Canning.

“We were one of the very first craft brewers to retain their services,” he says, “and we are very happy about making that decision.

“They provide us with a gorgeous machine that I personally would love to own in a perfect world,” he says, “but it’s just too much of a cash outlay for a company of our resources right now.

“They come in here every Friday to package from one to five pallets of beers, depending on demand, and they do it all very efficiently and very professionally, easily resolving any technical issues that may creep up now and then.

“It’s a wonderful relationship,” he sums up, “and I look forward to continuing it well into the future.”