Chips Off the New Block

More than ever, Canadian consumers are eagerly reaching out for healthy, better-for-you snacks that still reward their taste buds with satisfying flavors, aroma and, when called for, a zesty crispy crunch.

And thanks to companies like Naturally Homegrown Foods Ltd., of Surrey, B.C., it is not a reach too far.

Marketed under the Hardbite brand name, the gluten- and allergen-free chips— cooked in avocado oil—are made without any preservatives, transfats or GMO (genetically-modified organisms) to offer consumers a tasty cholesterol-free snacking option that has been steadily growing its share of the Canadian snack-food market at an impressive pace.

Already retailing across Canada through select Loblaws and Sobeys supermarkets, the Hardbite brand chips have also been selected by the Toronto-based Porter Airlines as the complimentary free snacks handed out by Flight Attendants to the passengers in mid-flight.

“I believe that we’ve done a very good job in establishing the brand in the Canadian market,” says company president Kirk Homenick.

“I think we understand the Canadian consumer quite well in terms of their interests and what they’re seeking in a salty snack,” says Homenick, citing a highly imaginative and creative product portfolio comprising tantalizing potato chip flavors such as Avocado & Lime, Wild Onion & Yogurt, All Natural and Rock Salt & Vinegar, among others.

In a similar vein, the Hardbite range of root vegetable chips is also something of a marketing masterstroke, as evidenced by the ingeniously named Sweet Spud of Mine, 18 Carrot Gold and Drop’n Mad Beets varieties.

As Homenick relates, this lighthearted approach to marketing has struck a very responsive chord with the target consumers, which the company actively nurtures through various social media platforms and online contests.

In fact, the company regularly encourages consumers to submit their own outdoor-themed photos to embody the elements of being active and enjoying life for possible reproduction on the actual Hardbite brand chip bags—offered in laminate 50-gram and 150-gram flexible pillow pack bags designed by Crew Marketing.

With growing production volumes starting to push the boundaries of what the Surrey plant could handle with its existing labor-intensive production process, Homenick realized that the company would have to automate much of its process sooner or later to retain its hard-earned gains in market share.

“One of the big issues in the industry is the fact that there’s a real scarcity of labor in the marketplace right now,” Homenick told Canadian Packaging in a recent interview.

“We had simply reached the limits of our existing capacity, and we had to expand it one way or the other.” 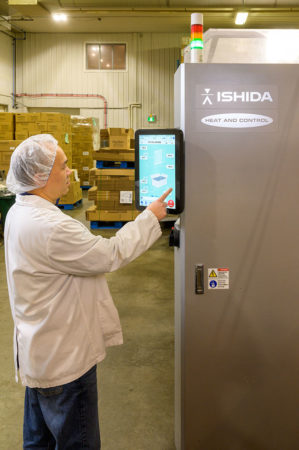 “We had a long relationship developed with Kirk, and eventually he realized that he needed to start that automation,” Jenkins says.

“His initiative, or his motivation, was to automate the process to become more productive and to eliminate the challenges with staffing.”

Having purchased the first portion of equipment from Heat and Control back in 2016, Homenick called on Heat and Control again about a year ago to complete the second phase of automating the facility.

“It became extremely important to us to obtain new equipment that provided high process efficiencies,” Homenick says, “while also being intuitive and user-friendly for the operators.”

He was not to be disappointed, with Heat and Control proceeding to supply the Surrey plant with a wealth of state-of-the-art automated packaging equipment comprising:

Other Heat and Control equipment used at the Naturally Homegrown facility includes an additional packaging system consisting of:

Looking at the entire system as a whole, Homenick has already seen a stunning improvement in the overall facility.

“The equipment allowed us to grow and increase our overall output as we have grown to meet our increasing demand,” Homenick says.

“All of their equipment has touchscreens, making it intuitive and very simple for our staff to learn and use.

“Overall, the equipment from Heat and Control has helped to increase the amount of pounds or kilos per hour that we’re processing at the facility.” 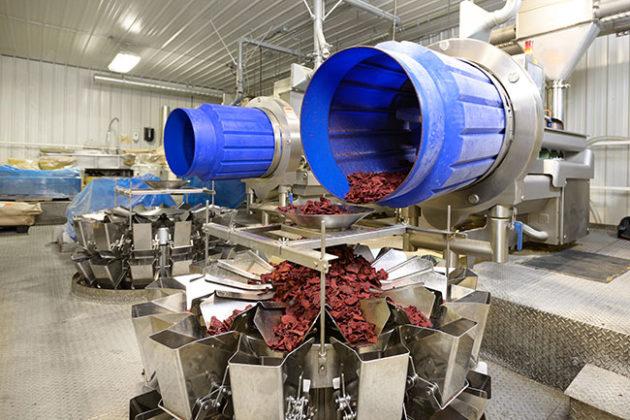 Homenick says he is very understandably impressed by the accuracy of the Ishida multihead weigher model CCW-RVE-214.

“The accuracy of the scales has been a real benefit for us,” Homenick says. “I think that the Ishida scales are very high-quality equipment.”

As for the user-friendly Ishida VFFS bagmaker model Astro-S-203 and the Ishida automatic case-packer model ACP-700-R, Homenick says the machines have virtually automated the previous manual packaging methods used at the plant.

“Between the bagger and the automatic case-packer, there’s a feedback loop running through the computer system,” Homenick elucidates.

“So if you’re dealing with underweight or seal integrity issues, our operators can easily adjust for that.”

In addition, the Ishida VFFS bagmaker model Astro-S-203 has intermittent jaw technology that allows operators to pack in a wider range of formats—from pillow packs to gusset and block-bottom packs—resulting in highly secure packages.

For its part, the Ishida Multihead Weigher model CCW-RVE-214 offers impressive running speeds of up top 120 weightments per minute, while also allowing for mix weighing of up to four products at a time.

“A person can only pack so many snack food bags into a case per minute,” Jenkins states. “The machine doesn’t take a break and the machine doesn’t slow down. Once it’s programmed and set up properly, it just runs.”

Prior to the case-packer’s installation, it took three Naturally Homegrown operators to perform manual placement of the bags inside the boxes, closing of the cases, and stacking the filled boxes onto a pallet.

Now packing upwards of 150 bags or 10 cases per minute, the Ishida automatic case-packer model ACP-700-R only needs one operator and requires less handling of the individual chip bags, thereby protecting the overall integrity of the chip products. 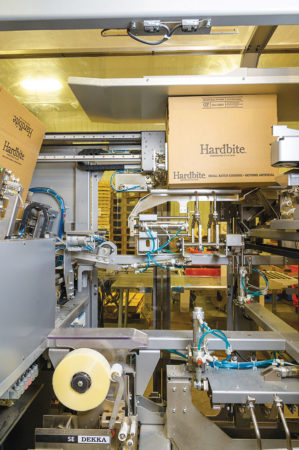 An inside view of the ACP-700-R case-packing cell from Heat and Control, which integrates case-erecting, bag sorting/packing and case closing functions for fully-automatic operation.

“When you pick a bag of chips up by hand, you can break the chips in the bag,” Homenick explains.

“This automated case-packer actually feeds the bags of chips into the boxes transferred on the conveyor system, utilizing gravity to fill out each case,” he explains.

“In essence, staff are not touching the bag at all; it is being gently placed in the box.”

When operators switch the chip bags from the 150-gram variety to the 50-gram option, the overall picking pattern, and the size of the case itself, must be changed.

With up to 500 programmable pre-sets changeovers take less than 3 minutes via the machine HMI.

“This goes back to the case-packer’s intuitive nature,” Homenick extols. “The change is just transitioned to our touchscreen, as opposed to requiring shut down of equipment and having some of our maintenance do all the work on it.”

With the integrated automatic system magnificently enabling much-increased run rates, while meeting all the ROI (return on investment) targets, Heat and Control easily fulfilled Homenick’s original expectations, and then some.

“My understanding from talking to Kirk and having numerous follow-up visits is he’s completely satisfied with what he’s experiencing, even above what he was promised,” Jenkins says.

“The system is delivering on all fronts in terms of bags per minute quality and flexibility.”

Homenick says he appreciates that the Heat and Control team took the time to help get the system integrated into facility’s production process.

“We’ve had a few things where we either changed case pattern for new items or bugs that we needed to work out after installation,” Homenick recounts.

“But the aftercare service and support that we received from the team at Heat and Control was timely and effective.”

The feeling is mutual, according to Jenkins, who shares that Homenick and his team were a pleasure to do business with for their friendly and professional disposition.

“We certainly appreciate their transparency, and that’s how we recognize that this relationship is a full partnership,” Jenkins relates. “It’s certainly a two-way street.” 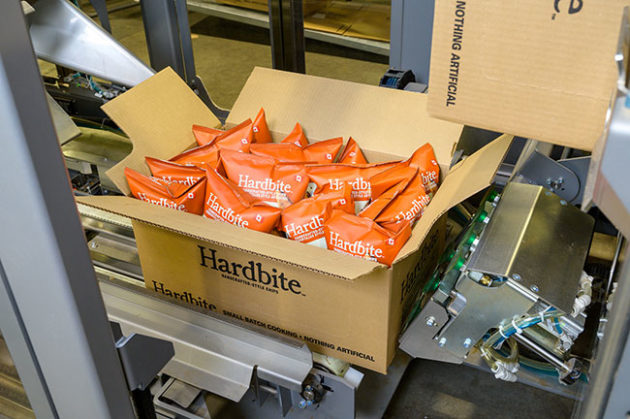 The finished bags of Hardbites chip products come off the ACP-700-R automatic case-packer perfectly positioned inside the corrugated shipping case, ready for coding and sealing.

With the chip and snack market expected to remain healthy, Homenick believes that Naturally Homegrown will reap significant benefits from this capital upgrade well into the future.

“Changing consumer habits are going to be a driver of growth in the future,” Homenick says, stressing the importance of product innovation and efficient manufacturing.

“I think it’s really a matter of being focused on flavor trends,” he says. “With a lot of snacking now being done away from home, having convenient packaging solutions is key to meeting the trend of on-the-go eating,” Homenick
concludes.

“We look forward to achieving our goal, as an organization, to become the kettle chip of choice for Canadian consumers.”