Americans are as ready as they’ve ever been to #LiveSummer (yes, hashtag), and Molson Coors‘s Coors Light is poised to help make the summer of 2014 as refreshing as possible. The brand’s first-ever seasonal extension, Coors Light Summer Brew, and a new summer can design will bring extra excitement to the summer party, enabling legal-drinking-age consumers to squeeze the most out of summer. 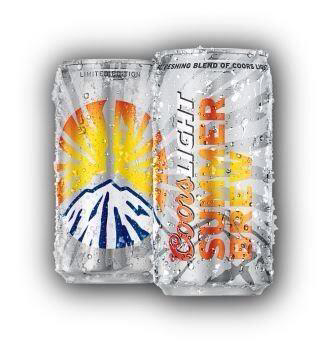 “Summer is too short and we know that when it finally arrives, our guys have a lot they’re trying to fit into each day,” says Sarah Ross, senior director of marketing for the Coors Family of Brands. “We wanted to roll out some new ways to really up the refreshment factor and grab the attention of beer drinkers. It doesn’t stop with the new seasonal flavor; our cutting-edge design series this year has people looking twice and the ‘Splash’ packaging builds on this excitement.”

The summer design package was inspired by the refreshment Coors Light provides on those hot summer days during epic summer adventures, summer holidays or just while hanging out with friends at the beach. Look out for the paint-splattered look of the new ‘Splash’ can as it makes its way to market starting this week.

Coors Light Summer Brew and the ‘Splash’ design packaging will receive full marketing support, including English- and Spanish-language TV advertising, out-of-home advertising, digital marketing, social media, retail merchandising, special events and public relations. Beer drinkers wanting in on the action should use #LiveSummer, and keep an eye out for Coors Light and Coors Light Summer Brew popping up with refreshing experiences at the hottest summer events.

For more information on Coors Light Summer Brew and the new can design, follow @CoorsLight on Twitter or go to Facebook.com/CoorsLight or www.CoorsLight.com.

Coors Light is a brand belonging to the Molson Coors Brewing Company, a North American brewer formed in 2005 by the merger of Molson of Canada, and Coors of the United States.

It is the world’s seventh largest brewer by volume. While the company is incorporated in the U.S., the company is traded on stock exchanges in both countries, and control is equally shared between the Molson and Coors families.

On May 26, 2011 seventh-generation family member Andrew Molson succeeded Pete Coors as acting chairman of the company, which is headquartered in both Denver, Colorado, and in Montreal, Québec.