Mississauga, Ont.—The year 1975 was momentous for many great beginnings, with the debut of Wheel of Fortune, Stevie Nicks joining Fleetwood Mac, and the release of the Atari 8000 which sparked the microcomputer revolution. The year 1975 also marks the beginning of Festo, Inc. in Canada.

In celebration of Festo’s 40th anniversary, the company featured several flying bionic engineering marvels (see bionic seagull flying free in the image above) from its Bionic Learning Network during “Engineering Week” at the Ontario Science Centre in Toronto this month.

“Over the past 40 years, Festo has become a substantial part of the Canadian industrial landscape,” emphasized Festo Canada president and chief executive officer Thomas Lichtenberger at a press conference held at the Science Centre. “We have built strong relationships with our customers from coast to coast, thanks to our unique and holistic approach to meeting their requirements. As a product innovator, solutions provider and leading industrial educator, Festo will continue to lead industry into the smart factory world of Industry 4.0 here in Canada.”

As national market leader in pneumatic technology, the Festo brand is recognized for excellence and for approximately 100 new technical and design innovations annually. Over the past two decades, Festo also added electric motion and process automation technology to their portfolio. Customers are able to get both technologies from one reliable source, whichever better suits their process and factory automation needs.

Festo provides significant added value by serving as specialized solutions provider to help customers achieve their automation goals, from project conception through to startup. Festo’s application specialists and engineers partner with customers to meet their automation needs. Together with the expertise of its colleagues at Festo’s headquarters in Germany, Festo is also able to develop and manufacture variants of existing products.

In addition to being a global leader in industrial automation technology, the Festo Group distinguishes itself as world market leader in industrial training and education. Following last year’s acquisition of Quebec City-based Lab-Volt and its integration into Festo Didactic—the Festo Group’s division for technical education and industrial training—their combined products and services offer customers unprecedented one-stop shopping for learning systems, courses, training and training equipment for all areas of automation technology. The acquisition has also boosted Festo’s presence in Canada by adding 220 experts to the team.

This investment of Festo Didactic reflects the company’s belief that industrial training and education will be a vital part of the implementation of Industry 4.0 as Canada moves into the era of smart factory automation.

“Festo is determined to be a pace-setter in the development and implementation of the smart technologies of tomorrow,” said Lichtenberger. “Our aim at Festo Canada is to maximize the productivity of our current and future customers. That, in turn, will ensure we continue to be a great success story here in Canada for decades to come.” 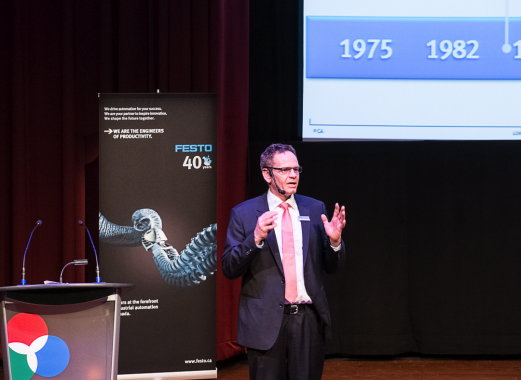 Festo is a global leader in automation technology, and the world market leader in industrial training and education. Festo’s pneumatic and electric drive technology stands for innovation in industrial and process automation—from individual products to ready-to-install solutions. Festo’s hallmarks include a global presence and improving customer productivity through close, long-term partnerships. With 16,700 employees worldwide in 61 national companies, Festo’s sales for 2013 were €2.28-billion (~ CDN$3.075-billion). This year, the third generation, family-owned company celebrates the 90th anniversary of the company’s founding, and the 40th anniversary of Festo Canada.

Company information can be found at www.festo.com.