Minneapolis & Rehovot, Israel—Stratasys Ltd., a leading global provider of 3D printing and additive manufacturing solutions, announced that the company’s multi-material Objet Connex 3D printing technology has played a leading role in the production of the iconic RoboCop suit created by Legacy Effects for the main character in this year’s blockbuster movie.

Tasked with realizing the 3D designs from the Robocop production designer for the ultra-sleek RoboCop suit was Hollywood special effects company, Legacy Effects. Their use of Stratasys’ 3D printing technology has helped bring to life a number of recognizable movie characters on the big screen.

Using Stratasys’ high resolution Objet Connex multi-material 3D printing technology, Legacy Effects produced every aspect of the RoboCop suit—from helmet, to boots—as master mold patterns. These pieces were then molded and cast into other materials to create variants of the suit depending on the requirements of each scene.

In addition, some versions of the suit used in the movie were composed of as much as 90 percent actual Stratasys 3D printed parts.

For example, the striking visor, which forms part of the helmet on the black version of the RoboCop suit, features a gleaming red strip; the entire visor used in the movie is 3D printed with Stratasys transparent material known as VeroClear. 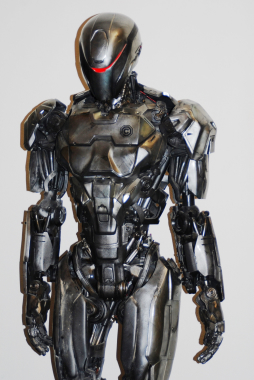 “First, in terms of the size of RoboCop’s chest piece specifically, only Stratasys’ 3D printing technology would allow us to print something at the actual size; the part virtually fills the entire build-tray,” Lopes explains.

“Second, the same part comprises a blend of smooth areas, as well as other areas that feature an extremely high level of detail, such as the police badge and other logos, which we needed to retain for the molding process. There isn’t a technology currently available beyond that provided by Stratasys that affords us this level of intricate detail, together with the hard surface modeling of the shells all together in one print.

In addition to creating the Robocop suit, Legacy Effects was also involved in 3D printing both master molds and prototype parts for the ‘Exo-suit’ featured in the movie. These prototype pieces included fully-functional spring-operated fingers that were printed in a single build using multi-materials on the company’s Stratasys Objet Connex 3D Printers.

Using Stratasys’ 3D printing technology the team at Legacy Effects is able to work much faster and more efficiently than it could in the days when it produced parts by hand.

“Doing everything by hand meant that we couldn’t run tests as it would have taken forever,” recalls Lopes. “Also, 3D printing allows us to work in symmetry, which enables us to build an entire left side of a suit, then mirror it and output the right side as well, all from one file with the click of a button. You can’t do that by hand.”

Despite the recent economic downturn still having an impact on studio budgets, high expectation from customers requires shorter production times, regardless of the all-to-commonplace eleventh-hour changes.

For Lopes, 3D printing’s ability to speed up processes, as well as the capability to make late changes has revolutionized the way Legacy Effects operates.

“This is where 3D printing comes to the fore by meeting such pressures head on,” says Lopes. “If we see something’s not working, or we’re asked to make a design change, we can make another iteration, go to an open 3D printer and be printing two simultaneous tests within an hour. We go to lunch, come back and it’s done. It doesn’t get better than that!”

“Legacy Effects’ use of multi-material 3D printing as its solution of choice is indicative of how the technology is becoming increasingly integral to filmmaking,” says Stratasys North America director of marketing Bruce Bradshaw.

“The ability to rapidly 3D print all materials together in one single print run meets the film industry prerequisite to save time and money. But the real show-stealer is Stratasys’ ultra-fine 16 micron-layer 3D printing. In the special effects world, fine detail and true-to-life models and parts are the industry standard and our Connex multi-material 3D printing technology continues to be a top performer among designers and engineers.”

Watch an exclusive interview with Jason Lopes from Legacy Effects describing his experience creating the suits and helmets for the RoboCop movie using Stratasys 3D Printing: