Robolink Apiro allows for kinematics of all kinds quickly and cost-effectively. 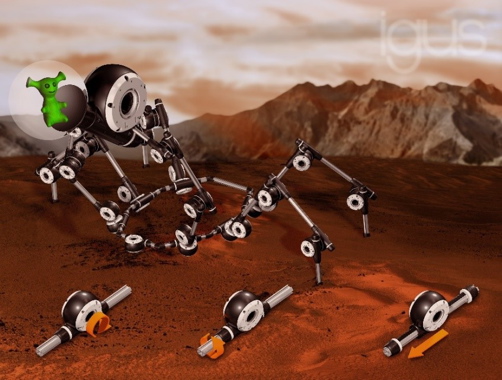 The Apiro mission: performance of complicated movements – like those of a spider – with only three new worm gears for standard, linear and inverted motion. (Source: igus GmbH)

With robolink Apiro, design engineers can choose from three lubrication-free worm gears for standard, inverted and linear movement. For users, the device offers solutions ranging from the simple linear robot to complex humanoid and animatronic robots. igus, the Germany-based manufacturer of engineered plastics, also has a presence in Providence, R.I. The company introduced the robolink concept at Hannover Messe 2018 in Germany in April.

Apiro, which derives from the Greek word unlimited, was developed with a focus on decoupling the motor and gearbox while also introducing new kinds of worm gears that can be installed in up to six axes, such as an articulated robot. A gearbox with linear motion, inverted and conventional robolink worm gears in four sizes are available in Apiro. They can also be combined.

The new modular system will allow even complicated movements to be implemented. For example, designers needing parts for individual SCARA (Selective Compliance Assembly/Articulated Robot Arm) robots and linear robots as well as sprue pickers used in removing products from injection molding machines will see benefit in Apiro. Designers of transport and handling systems, as well as humanoid and animatronic robots which can perform movements like those of a spider, will also recognize the benefits of the new modular motion system.

The new robolink series is also suitable for training, development and research as different kinematics can be set easily and quickly.

The joints are combined by a multi-functional profile made of aluminum that makes it possible to insert drive shafts through a hollow space in the middle of the unit. The inverted worm gear makes use of that hollow space.

The gearbox allows the aluminum piece to rotate, which makes it applicable for use in robotics and rotating applications. In the case of the new worm gear with linear movement, the aluminum profile can travel linearly through the worm gear, and vice versa. Worm gears also have very little clearance.

The multi-functional profile enables users to connect the different gearboxes of the robolink Apiro series. Placing several Apiro joints side by side also allows for the possibility of parallel joint connections, which creates endless possibilities for many different automation applications.