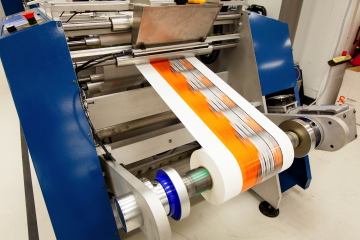 When it comes to quality and perfection, Reynders Label Printing knows just how to deliver. From its humble beginnings over half a century ago, when Emile Reynders founded the company in 1959 printing stationery in the family home, it has since expanded to become one of the leading label specialists in Europe. Headquartered in Boechout, Belgium with six specialized printing divisions and eight production facilities spread throughout Europe and Asia, Reynders Label Printing prides itself in its commitment to delivering the very best in design and label printing in which innovation, quality and customer service are of paramount importance.

Nowadays, the family-run Reynders has over 60 printing presses and more than 450 printing stations covering flexography, offset, letterpress, screen, dry toner, wet toner and ink jet printing technologies, enabling the company to offer one of the broadest ranges of label printing equipment for a host of applications.

Its focus on maintaining its leading position through capital investment in the very latest label printing equipment that led to the installation of the first Domino N600i digital color label press at its Belgium production facility.

Chief executive officer Marc Reynders explains, “Over the past few years, label printing has been facing new challenges with customers demanding ever tighter delivery deadlines, shorter average run lengths, more personalized data; but still the highest quality of end product.  As a result, we needed to find solutions that can not only cope with these changing demands, but that also means adjusting our service offering for our customers.  It ultimately helps us to move our business forward in line with the changing dynamics of the industry.” When Reynders and his team first saw an early technology demonstration of the N600i at Ipex 2010, they were immediately impressed as the Domino digital printing press offers high levels of productivity combined with improved print quality for ink jet.

“We already had a number of HP Indigos, the latest Xeikon technologies and three Agfa Dotrix digital label presses all of which were doing a good job,” continues Reynders. “But to take Reynders to the next level in digital label production we needed a solution that could offer high quality digital printing at significantly increased speeds. The N600i was just what we were looking for.”

The Domino N600i four color digital label press offers a native 600dpi (dots per inch) print resolution and uses one of the smallest drop sizes (6pl) to deliver the highest quality output onto a range of coated paper and plastic label stocks, and operates at speeds of 50-75 meters per minute. Combined with a standard 333mm (13-inch) wide web width it provides up to 1,500-square meters of print per hour. In addition, by varying the droplet sizes delivered from a single print head combined with the composition of the ink, the N600i can reproduce a wide color gamut including over 80 percent of the pantone color range.

With so many label press technologies installed across Reynders multiple sites, the fact that Domino had integrated the Esko front end into its N600i added to its appeal to Reynders and assisted with its integration.

“We already worked with the Esko workflow and this together with the intuitive user interface made working with the N600i so much more straightforward,” says Reynders.

Installation didn’t go without its challenges, especially with the company agreeing to be a beta test site for Domino’s N600i, but both the Reynders and Domino teams worked together to ensure any issues were addressed and the installation met all requirements.  “It’s fair to say that with any beta site, installation can take longer than usual, but we are delighted with the outcome,” confirms Marc. “We always had complete confidence in Domino throughout the process. They listened to our requirements, were extremely helpful in exploring ways to overcome any issues and conducted the installation with the utmost professionalism.”

Within a short time, the operations team had the N600i running at production speeds of 50 meters per minute, a significantly higher rate than the company’s existing digital technologies, and were using the press for new mid-volume applications of up to 3,000 meters, well above the 1,000 meters limit they typically would schedule on digital machines.

The increased speed of throughput brought additional challenges for the operators, as it meant they could no longer manually check for rejects and quality of output, as was the procedure for the company’s slower running solutions.  As a result, Reynders installed an automated vision system onto the N600i line that could cope with verification of output at such high speeds, reducing operator intervention and adding further to production efficiencies. To further develop the flexibility and capabilities of the N600i, Reynders and the Domino team are working together to develop new inks as well as review the integration of inline die-cutting technology within the N600i production line.

“Although it is still early days, we are extremely impressed with the capabilities of the N600i,” enthuses Marc, who is already looking to exploit the potential it can offer in terms of longer term new business opportunities.

“The N600i has certainly lived up to our expectations of high resolution, high quality output at significantly higher operational speeds. The operation has been reliable and we are able to run much longer production jobs than we would normally print with digital technology, in this respect it is more targeted at replacing what we would normally run on flexo machines.

“If the N600i continues to perform to our expectations and we can achieve all our business goals, we will be considering further investment in this technology in the future,” concludes Marc.

Founded in 1978 and headquartered in Cambridge, U.K., Domino has a global reputation for the development and manufacture of coding, marking and printing technologies that satisfy the requirements of manufacturers and commercial printers as well as its worldwide aftermarket products and customer support services. Its services for the commercial print sector include a range of high-end single and full color digital ink jet label presses enabling VDP and short run production as well as QR, barcode and numbering capabilities used within a wide range of applications including finishing/bindery, newspaper and magazines, tickets, tags and labels, business forms, plastic cards, gaming/lottery and direct mail and postal sectors. Domino’s additional ink jet technologies encompass binary, continuous, piezo and thermal solutions and controller systems for the application of variable data, unique and serialized numbering and interactive data coding for traceability and anti-counterfeiting within a range of market sectors. Domino’s ongoing growth – both organic and through acquisition—is underpinned by an unrivaled commitment to product development. This year (2013) the company is celebrating its 35th anniversary.

In 2011/12 the Domino Group (Domino Printing Sciences plc) achieved a turnover of £312.1 million. Domino was awarded the Queen’s Award for Continuous Achievement in International Trade in 2012 and was named Company of the Year in the 2010 UK PLC awards. The Group employs 2,200 people worldwide and sells to more than 120 countries through a global network of 25 subsidiary offices and more than 200 distributors.  Domino’s manufacturing facilities are situated in China, Germany, India, Sweden, U.K. and U.S.