Miamisburg, Ohio- Missing a graphic element or printing incorrect text on packaging can be extremely costly for the printer or converter. The ultimate cost could be a product recall, with extremely expensive product costs and, more importantly, damage to the brand itself. However, the manual proofing process can be time consuming and inconsistent—and can result in a review process that can miscommunicate edits, resulting in errors.

Esko says that Bemis Company Inc. reports improvements thanks to the implementation of one of first automated quality control processes in the packaging market. Through a combined partnership with Esko and Global Vision (www.globalvisioninc.com), Global Vision quality control tools have been embedded within Automation Engine. Using Global Vision functionality, Bemis is able to conduct automatic quality control checks on packaging artwork for text, artwork, spelling, braille, and barcodes.

Headquartered in Neenah, Wisconsin, Bemis Company Inc. has played an influential role in the packaging industry ever since its founding in 1858. Now the largest flexible packaging company in the Americas, Bemis serves customers worldwide and their products are found in virtually every aisle of the grocery store. With 61 facilities in 12 countries worldwide, they offer unmatched size and scope. Bemis combines dedication to advances in material science with world-class manufacturing capabilities and quality customer service, creating a competitive advantage in the global marketplace. Over 70 percent of its products are used in food and consumer goods markets serving a wide variety of companies such as Kraft Heinz, Procter & Gamble, Kimberly-Clark, Hormel, Boston Scientific and General Mills. Other markets include agribusiness, medical devices, and pharmaceutical applications.

In their prepress department, Bemis Graphics in New London, WI (see photo of company headquarters above) originally proofed files like everyone else, visually comparing files to proofs. Eventually they moved to Automation Engine tools, using Viewer Compare, which places two files on top of one another and highlights the differences. It worked well, but they wanted to find an even more automated solution that would save operator time and be less error-prone. 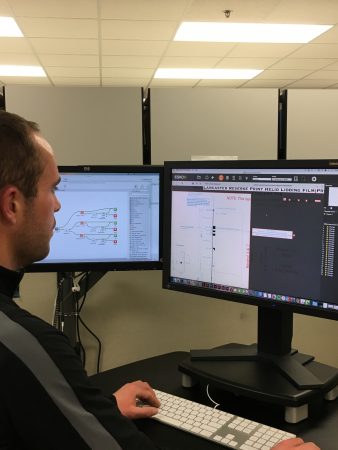 Christopher Laing, Graphics Technician III at Bemis Graphics, has done much of the legwork on the implementation and creation of the tickets for the Global Vision system.

“Like any company, we would miss things. It could be anything from copying text incorrectly and misspelling a word, to nudging a logo and inadvertently dropping something off the artwork. Unfortunately, there were times when we would print something incorrectly,” remembers Bemis graphics production manager Jeff Hochhausen.

“While we had been using Esko tools for decades, we learned about Global Vision when we were tasked to compare printed jobs back to the proofs for details like the correct plates, proofs, color and copy. Things can get missed there,” remembers Hochhausen. “From an overall business standpoint, Global Vision’s ScanProof, where we scan a press sample and compare it to a visual PDF, worked perfectly for us. Then we wondered, ‘Why not build this feature into our workflow?’ Global Vision had a server-based option where we could drop two files into a hot folder—the scan and the Automation Engine-generated PDF file. We were looking to automate the process to add speed. Certainly, an automated system is faster and more accurate than what a person can do.”

Pretty much after every file iteration, Bemis conducts a compare or file check. They check all the graphics elements and text, along with barcodes, comparing them back to the art file. As they build the art, they conduct a spell and barcode check after Esko normalizes the PDF file. Then they will compare the file to the original art files to see if anything has changed. When they add traps and assemble high-resolution images, they will perform another comparison to the previous PDF file.

“Even after we export the file to Esko Plato for step & repeat, we will compare the files again,” explains Hochhausen. “We will check the previous one-up to each of the fully stepped files. You never know when something might have happened to even just a couple of the stepped files. We know that if we used this process last year, we would have caught eight errors. It is hard to catch them manually.”

Bemis could always conduct their spell checks in Adobe Illustrator, but the library in every workstation has to be changed if they add new words; for example new ingredients. “By implementing the spell check within Automation Engine, we only have one library,” comments Hochhausen. “Now, when words or ingredients are added to the library, everyone has the change instantly. We can also guarantee that our artists are running the spell check, because it is automatically triggered by Automation Engine. Before, we couldn’t be sure.”

“What I like most is the speed we can get along with the confidence that nothing has changed—other than those elements that the client has requested. I would say tasks like the barcode check, alone, saves us ten minutes per job. Before we were checking the print and scanning the proof. We were walking away from the desk to scan the proof and manually check the barcode. Now it is done automatically,” adds Hochhausen.

Management is very interested in the system’s ROI. “The system certainly saves time on artwork. We also hope that, once we update to Esko Software Platform 16, we will be able to collect and pull out XML data that will show us how many errors have been caught,” remarks Hochhausen. “It is easy to do with Automation Engine, Automation Engine Connect, and the MIS. That could be very valuable.” 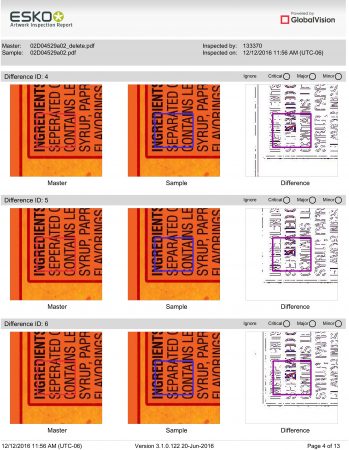 One of the nice surprises is that Bemis has found other ways to use Global Vision tools. “For example, in our order entry process, we create orders like anyone else and generate a PDF file from it. If someone else touches the order and adds something unwanted, we can detect those changes in the order,” says Hochhausen.

“Ultimately, we’d like to be able to skip all the other steps and compare the customer’s approved PDF file directly with the 1-bit LEN files. All we really have to do is to assure that the final output matches what the customer approves,” says Hochhausen. “The system works really well for us and it has eliminated errors and sped up our quality control process.

About Esko
Esko is a global supplier of integrated solutions for the packaging and labels, sign and display, commercial printing and publishing industries. Esko products and services drive profitability in the packaging and printing supply chain by reducing time-to-market and raising productivity. Esko employs around 1500 people worldwide. Its direct sales and service organization covers Europe, Middle East and Africa, the Americas and the Asia Pacific, Japan and China regions and is complemented by a network of distribution partners in more than 50 countries. Esko is headquartered in Gent, Belgium, and has R&D and manufacturing facilities in five European countries, the United States, China and India. Esko is a Danaher company (www.danaher.com). Company information available at www.esko.com.