While people rightly celebrated the bravery of the men and women in the armed forces during World War II, an often unsung hero are the people who remained behind… those who did their part in their own way to support the troops.
Prior to the war, Great Britain was a leading global producer of textiles, but all that changed due to the war effort requiring the brunt of the textiles to be processed into military garb. The same could be found to be true in other countries.

Along with dish towels and diapers, clothing was still required at home, so in an effort to offset the textile shortages, savvy women began utilizing retail cotton sacks from flour mills to fulfill their needs.

Thrifty folk began to sew their own shirts and dresses from the flour cloth fabric.

Patterned sacks from flour mills quickly became the most sought after, as it presented a more attractive clothing option for the clothes wearer.

A better package provided better sales and a better looking article of clothing. 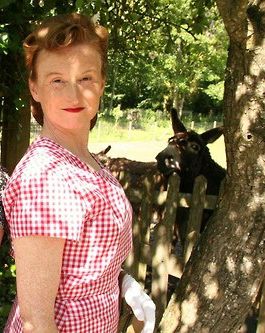 Realizing that having an attractive pattern on its flour sacks would drive sales, soon every flour mill got into the act, providing flour in a variety of prints and colors.

Labels on the flour sacks were easily removed after a brief soak in some water, allowing it to be peeled away.

After World War II with the production of an inexpensive paper sack for the flour, there was a decline in sales of flour packaged in cotton sacks, where today only a select few utilize the thrifty features of the cotton cloth flour sack for clothing.