A monthly look at some of the hits and misses in the packaging world from the viewpoint of Joe Public, Canadian Packaging magazine’s revolving columnists. From the June 2017 issue.

Dollar stores have come a long way since I was a kid, when they were tucked away in the sketchy domain of dusty old curios, hiding in darker sections of malls where few cared to wander. The wares for sale consisted of knockoffs of dubious quality and discarded junk that begged the question: Why would anyone buy this stuff? It’s a totally different picture these days, with deep-pocketed players like the Montreal-based Dollarama and the Dollar Tree Canada of Burnaby, B.C., battling it out for the budget-conscious consumers’ hard-earned dollars by providing cleanly-organized, well-lit stores that offer a fast-growing multitude of inexpensive, but highly useful items. And while most items at these outlets actually now cost more than a dollar, it is still amazing to see just how much stuff you can actually get from a pocketful of change, along with some offbeat packaging to go along with it—some naturally being better than others.
++++++++++ 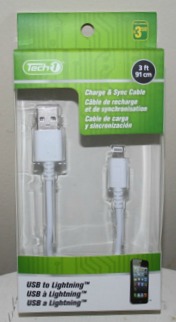 I normally wouldn’t recommend buying electronics at any dollar store, for obvious reasons, but having impulsively purchased the three-foot-long Tech-1 Charge & Sync Cable for my iPhone at my neighborhood Dollarama recently, I have been pleasantly surprised ever since. As anyone with a dying cellphone will attest, cables don’t last forever. Before long, the wires inevitably split to become both ineffective and something of a possible fire hazard to use. And whereas a more slickly-designed one-meter replacement cord from the Apple Store would have cost close to $30, I really don’t feel any guilt or envy about having paid just a little over one-tenth of that price for the Tech-1 alternative, even if it does have a more questionable service-life expectancy. Moreover, the green-and-white paperboard component of the upright square package looks professional enough to entice consumers to have a good look at the product through the see-through clear-plastic window, where it’s locked securely into place within a tight-fitting plastic blister cavity. All in all, it’s a fairly decent packaging execution that inspires confidence among the less hardcore tech crowd looking to replace or purchase accessories for their personal devices without paying through the nose.
++++++++++ 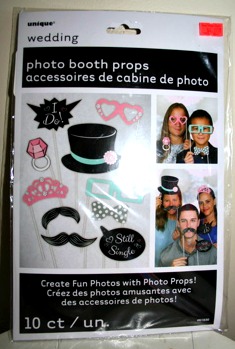 It has become something of a running joke among dollar store shoppers to be able to pop in during late summer not only to see the Thanksgiving decorations already on display, but also entire product sections dedicated to Halloween and Christmas as well. In fact, it seems that no season or celebratory occasion is ever really out of season at these stores, as I discovered with the Unique Wedding brand of disposable wedding photo booth props—a smattering of low-budget party accessories intended to enhance the special day’s merrymaking with a little goofball humor and silliness. As with most dollar store items, the packaging is simple—a flexible f lat plastic pouch with a fairly plain cardboard insert—but effective in keeping the costs low and the margins high, or at least high enough. Could this product have been packaged up with more whistles and bells? Of course it could, but probably at the expense of getting into unnecessary packaging overkill for no good reason. As it is, the crisp and clean photography get the product’s message across in a flash, and by simply flipping the package over, consumers can see exactly what they’re getting and the condition it’s in.
++++++++++ 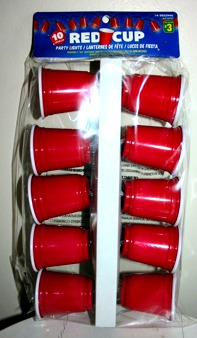 While I don’t expect to be in need of any wedding accessories this summer, I did want to spruce up my balcony with a fun little accent or two. And what could be classier than a string of party lights made out of those ubiquitous red plastic beer cups? Well, how about five strings of party lights made out of ubiquitous red plastic beer cups? Just think of it as a hoser’s DIY balcony decorating project in honor of Canada’s upcoming 150th anniversary, eh? Be that as it may, I really enjoyed the way these Red Cup Party Lights were festively lined up in two uniform rows of five inside the clear plastic pillow-bag And here lies the problem with these kinds of discount stores where everything can be bought with mere pocket change: it all adds up. What interested me about the packaging was the simple and straightforward way it displayed the red cup lights as a more or less finished, idiot-proof assembly, with the cardboard hanging tab on top making it clear what that product was all about and why I just had to have it, in multiples.
++++++++++ 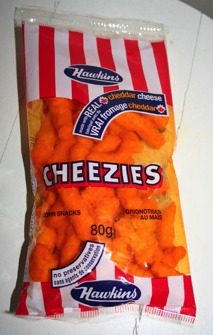 Another pleasant development that helps me see today’s dollar stores in a much more favorable light is the number of reputable brand-named goods on the shelves, including Heinz, Nestle, Ivory, Kraft, Hershey and Cadbury, to name just a few choice favorites. But it was the discovery of my all-time snacking favorite Hawkins Cheezies that quickly had me reaching for my remaining loose change at the nearby Your Dollar Store With More outlet. Manufactured by W.T. Hawkins Ltd. in Belleville, Ont., the iconic curly cheese puffs literally ooze with patriotism with their on-pack claims of their Canadian origins, the use of real Canadian cheddar cheese to make the one-of-a-kind product, and the carnival-like, striped red-and-white packaging graphics arrangement that seems to have remained blissfully frozen in time since the 1980s. What a fitting way to say, ‘Happy Birthday, Oh Canada!’

Paul Pethick is a Toronto-based writer and editor working in the healthcare communications industry.

Image at top of article purchased via www.fotolia.com.