New rubber-metal composite alters its flexibility in response to stress

AMES, Iowa—According to a press release from Iowa State University, researchers there have developed a new smart and responsive material that can stiffen up like a worked-out muscle.

When stress is applied to the material by bending or twisting, it automatically stiffens by up to 300 percent, according to the engineers that developed it, saying that once the flexible strip of material changes into a hard composite, it can support 50 times its own weight.

Importantly, the material does not requires heat, light or an outside energy source in order to alter its property.

The material is described in a paper recently published online by the scientific journal Materials Horizons. The lead authors are Martin Thuo and Michael Bartlett, Iowa State assistant professors of materials science and engineering. First authors are Boyce Chang and Ravi Tutika, Iowa State doctoral students in materials science and engineering. Chang is also a student associate of the U.S. Department of Energy’s Ames Laboratory.

Development of the material combined Thuo’s expertise in micro-sized, liquid-metal particles with Bartlett’s expertise in soft materials such as rubbers, plastics and gels.

The team developed a simple, low-cost method of producing particles of undercooled metal, IE metal that remains liquid even below its melting temperature.

The tiny particles are anywhere from one to 20-millionths of a meter across, and are created by exposing droplets of melted metal to oxygen which creates an oxidation layer that coats the droplets thereby stopping the liquid metal from turning solid.

“You can squeeze these particles just like a balloon,” Thuo says. “When they pop, that’s what makes the metal flow and solidify.”
The result, Bartlett said, is a “metal mesh that forms inside the material.” 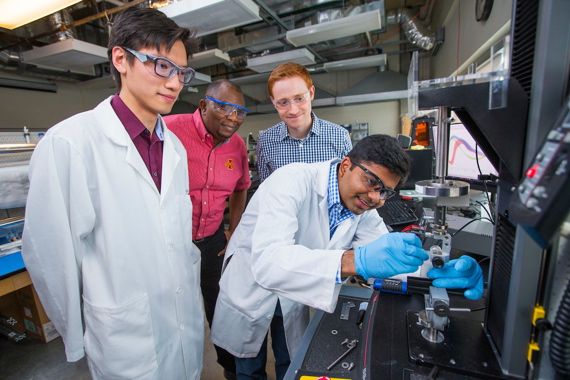 Thuo and Bartlett said the popping point can be tuned to make the liquid metal flow after varying amounts of mechanical stress. Tuning could involve changing the metal used, changing the particle sizes or changing the soft material.

The team’s own liquid-metal particles contain Field’s metal, an alloy of bismuth, indium and tin, but say that other metals could work also.

“The idea is that no matter what metal you can get to undercool, you’ll get the same behavior,” explains Thou.

The engineers say the new material could be used in medicine to support delicate tissues or in industry to protect valuable sensors or even uses in soft and bio-inspired robotics or reconfigurable and wearable electronics.

The Iowa State University Research Foundation is working to patent the material and it is available for licensing.

“A device with this material can flex up to a certain amount of load,” Bartlett says. “But if you continue stressing it, the elastomer will stiffen and stop or slow down these forces.”