Taking it to the bank!

The 2015 5oz. silver Maple Leaf is the first ever five-ounce coin struck by the Royal Canadian Mint to feature a hologram.

While holograms are usually produced independently before being applied to their intended surface, the Mint did things a little differently.

Each coin’s hologram was individually struck directly onto the coin resulting in an extremely precise and detailed finish.

The 99.99% pure silver coin has a face fall of $50, and had a very limited edition of just 1,500 pieces. Designed by Canadian artist Michell Grant, two holographic leaves shine from the coin’s center in a range of colors as they reflect golden hues of sunlight; while individual leaves engraved along the coin’s perimeter form a ring with the inscriptions “CANADA”, “2015” and “50 DOLLARS”.

Optaglio Ltd. was also commended for its fine silver coin commemorating the 25th Anniversary of the Canadian Space Agency. 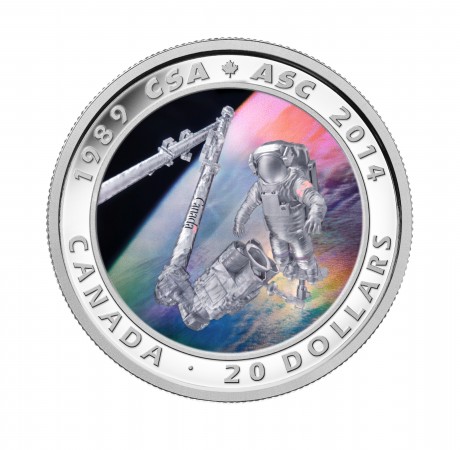 This 2014 minted $20-coin’s reverse design features an achromatic hologram image of a Canadian astronaut floating weightlessly above the Earth. The astronaut is anchored to a foot restraint on Canadarm2, which bears the Canada wordmark. Behind, there’s a cloud-mottled blue surface of the Earth backed by the black depths of space. The hologram lends depth and movement to the design, with the astronaut seeming to float above the  planet. The coin was produced in 99.99% silver and had a limited mintage of 10,000 pieces.

The awards took place at the Holography Conference in Shanghai and saw leading holography companies recognised for excellence and cutting edge technology.

After a career in holography spanning over 25 years, Wayne was responsible for the development and origination of many of OVD’s KINEGRAM projects for the protection of banknotes, ID documents, and brand protection. Wayne also authored more than 25 papers, and his technical expertise has been recognized in over 400 patents worldwide.

The International Hologram Manufacturers Association (IHMA) – www.ihma.org – is made up of 100 of the world’s leading hologram companies. IHMA members are the leading producers and converters of holograms for banknote security, anti-counterfeiting, brand protection, packaging, graphics and other commercial applications around the world. IHMA member companies actively cooperate to maintain the highest professional, security and quality standards.