Fortress Technology employees calibrating the company’s 20th anniversary earlier this year in front of the metal detection systems manufacturer’s Toronto plant, which has recently commenced a major expansion aimed at more than doubling the facility’s manufacturing area to over 52,000 square feet of combined production and office space to meet robust sales growth.

Considering that it only takes one nasty product recall or a food poisoning outbreak to bring even the biggest and most trusted brands to their knees, or worse, an investment in a decent metal detector or an X-Ray inspection unit is a de facto cost of doing business in the packaged foods business nowadays—at practically every stage of its vast global supply chain.
Aside from simply making sound business sense, food companies of all stripes and sizes are increasingly under pressure to fulfill the ever-more stringent regulatory requirements and certification standards to continuously validate their food safety credentials—not only to their retail customers, but also to legislators tasked with ensuring optimal consumer protection for the general public.
With safe food increasingly taken for granted as a right by the everyday consumer public, there has arguably never been a better time than now to be in the metal detection or X-Ray inspection business.
“In the last year or so there has actually been a big step forward in the metal detection technology and performance opportunities,” says Steve Gidman, founder and president of Toronto-based metal detection systems manufacturer Fortress Technology, Inc.
“Detectors that can send and receive multiple frequencies simultaneously are leading this change,” says Gidman, suggesting the new method will soon start phasing out the earlier generations of traditional single-frequency and dual-frequency metal detectors that often required experienced technicians to reset the machines to accommodate product changeovers or changing application requirements.
“In the last few years, the new art of transmitting signals across a number of frequencies at the same time as receiving them has become a commercial reality,” says Gidman, citing successful recent market
launch of the company’s new-generation Interceptor series multi-frequency metal detectors boasting vastly improved sensitivities and detection capabilities.
According to Gidman, the Interceptor range metal detectors have vastly expanded the application range where they can be used at food-processing plants.
“The significant sensitivity improvement was targeted at the more difficult wet and/or conductive product that were traditionally hard for metal detectors to inspect,” he states.
“This includes bakery products, meat, dairy and seafood—especially in applications which require reliable detection of stainless-steel particles, due to all the stainless-steel equipment being installed on new processing lines for sanitary design reasons.
“Being a very conductive object that tends to hide in conductive materials, stainless steel requires very high frequencies to detect,” he explains.
“But simply switching the system to higher frequencies to achieve that goal also meant compromising the detection of ferrous materials, which are magnetic rather than conductive, requiring low-frequency signal processing.
“Being able to do both high and low frequencies, along a much wider spectrum than we have historically, eliminates the need for that trade-off,” Gidman states.
“I have been in this business for decades,” he notes, “and this is arguably the biggest step change that I have seen in metal detection.”
That said, there is no denying that X-Ray inspection systems have made significant market inroads over the last five years or so—often at the expense of metal detection technologies—despite the higher  price-tag. 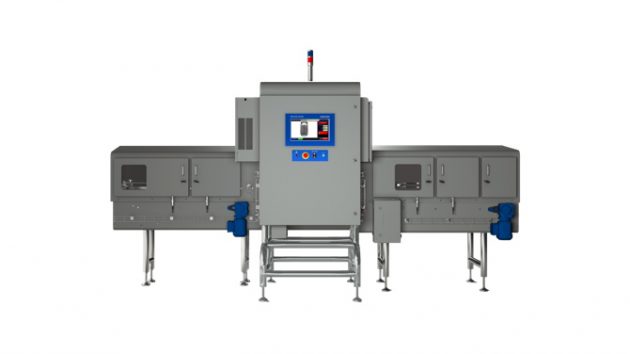 Manufactured by Mettler-Toledo, the X37 X-Ray inspection system was designed to enable high-speed inspection of tall and rigid containers used in food and beverage industries.

Aside from being able to detect a wider arrange of possible contaminants—including glass, stone, calcified bone, high-density plastic and rubber, among others—X-Ray systems are also lauded for their built-in multitasking that enables them to perform checkweighing, fat analysis, component count, zone mass measurement and shape conformity.
According to Doug Pedersen, inspection systems sales manager at Bartlett, Ill.-based Sesotec, Inc., the passage of the FSMA (Food Safety Modernization Act) in the U.S. and the impending new Food Safety Act legislation in Canada have prompted many food producers to beef up their product inspection capabilities. 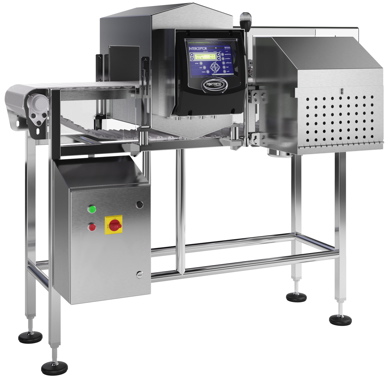 “This has forced many food processors to become more proactive, rather than reactive, about their food safety standards,” says Pedersen. “It used to be that you could get by with just obtaining a HACCP (Hazardous Critical Control Points) certification, install a couple of metal detectors, and you would be covered.
“Nowadays, the stricter compliance rules mean that you want to eliminate all the foreign objects from the product stream well before they even get to the end-of-the-line inspection system, be it a metal detector or an X-Ray unit.
“That means putting more inspection units in more higher-risk areas throughout the process, be it in the inspection of raw materials, pipeline detection for liquid foods, gravity free-fall conveyors, and so on,” says Pedersen, noting that the German-headquartered parent company Sesotec GmbH manufactures both metal detectors and X-Ray systems, along with optical sorters.
“For many installations, we will recommend using more than one technology,” says Pedersen. “For example, there my be instances where you may want to put your metal detector right on top of your optical sorter to remove some of the lager pieces of metal, which the sorter will detect but can’t remove from the process.”

According to Pedersen, making a choice between installing either a metal detector or an X-Ray machine is based on a faulty premise to begin with.
“The key thing is to buy the technology that best addresses the specific food safety risk of your application,” he asserts. “If a metal detector is enough to do the job, then go with it; if not, look at X-Ray machines, optical sorters and whatever else you may need to address the risk within the process.
“It’s not an ‘either or’ proposition,” says Pedersen, suggesting that even the X-Ray’s technology’s often-cited advantage of offering built-in checkweighing capabilities is often “oversold” as a marketing gimmick.
“Checkweighing with an X-Ray unit has its merits when you’re looking to find your gross underweights,” he reasons, “but if you want to collect reliable weight data for statistical process, to achieve true weight compliance, or to eliminate product giveaway, a dedicated checkweigher would be the way to go.”
According to Pedersen, the real beauty of X-Ray inspection technologies lies in its inherent ability to not only detect product impurities, but to generate a much fuller product profile all-around.
All new Sesotec-made X-Ray systems feature proprietary object analysis software that enables them to reveal everything in the package, he explains.
“So not only are they able to inspect completely random products, but they’re now getting to the point where they can recognize the difference between a chicken leg and a chicken breast or pork rib and pork belly, for example, and tell you exactly what the product is,” Pedersen relates.
Similarly, Sesotec has also made significant technological advancements in metal detection with the launch of the company’s new Intuity range of metal detectors—featuring innovative “variable multi-simultaneous frequency” to generate an electromagnetic picture of the product on the unit’s interface.
“Hence the user actually has a visual representation of what the product looks like,” he extols. “A metal detector with electromagnetic signature capability traces the shape of the image and follows it as it changes—thereby finding metals that would have otherwise been hidden.
“The reject images constructed with this visual electromagnetic signature software have far more meaning to the human eye that a bar-graph moving on the screen,” says Pedersen, using a traffic hazard analogy to make the point.
“Conventional metal detection technology would tell the driver only that there is danger ahead, whereas a metal detector that provides an image of the product signals would tell the drive where the danger is coming from and, to an extent, what kind of danger he is facing. 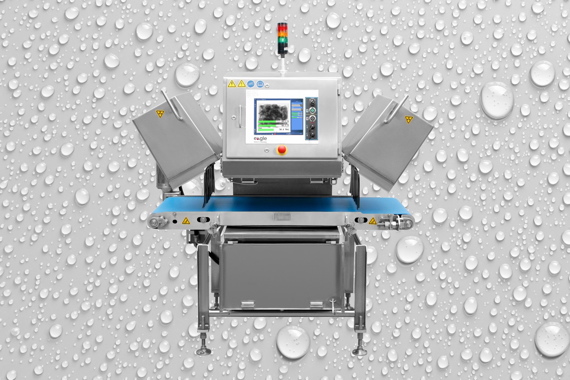 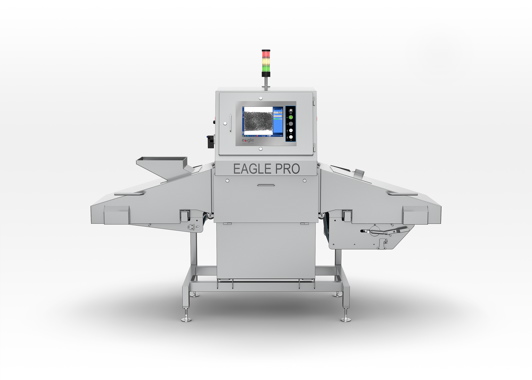 For all that, the significant market share gains achieved by X-Ray inspection systems over the last several years are an irreversible trend, according to PLAN Automation’s X-Ray product inspection specialist Mat Bedard.
“In fact, the demand for X-Ray inspection is so robust that the company has recently started up an X-Ray machine rental service that allows food companies short-term rentals of one of several Eagle Product Inspection X-Ray systems it distributes in Canada.
“For companies who don’t have the money, renting a machine from us for a few hours, days or months can provide an optimal solution,” says Bedard, noting that most of the rental business is driven by emergency product reclaim scenarios requiring quick and thorough inspection to trace suspected product contamination.
“Last year we did 45 emergency reclaim installations across Canada,” says Bedard, “ranging from a few hours to a few months, with clients ranging from tiny mom-and-pop shops with no product inspection whatsoever to multinational food companies whose existing inspection equipment is either tied up or out of commission.
“We have a constantly updated fleet of six to eight X-Ray machines than can inspect anything from a small granola bar to a full shipper case of product,” Bedard says, noting that Eagle’s proprietary MDX (material discrimination X-Ray) technology provides a highly reliable means of product contamination detection.
“The MDX technology provides the ability to detect low-density materials such us glass, rock, rubber and plastic more efficiently by assessing the product’s molecular weight and chemical composition,” he explains. 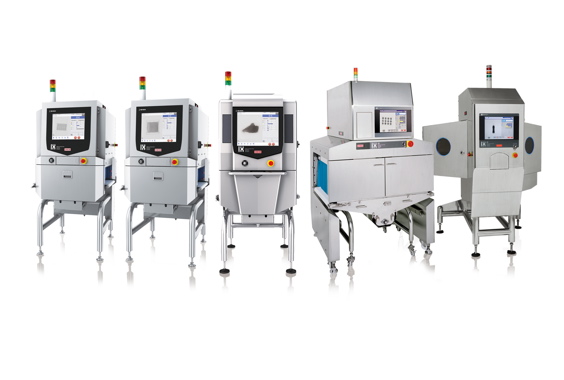 The new IX series of X-Ray inspection systems from Ishida offers a broad range of models, distributed by Heat and Control, to suit applications ranging from entry-level inspection to high-speed quality assurance for complex products such as red meat, poultry and vegetables.

For meat-processing applications, meanwhile, Eagle’s proprietary DEXA (dual-energy X-Ray Absorptiometry) technology provides unrivaled product inspection and analysis capabilities, according to Bedard.
“In the meat industry, DEXA is primarily used to assess the product’s fat-to-lean ratio (fat analysis) for any kind of meat—fresh or frozen.
“The accuracy of these systems is just phenomenal,” Bedard extols, citing +/- 0.5 CL (chemical lean) value on average.
“We can do raw meat inspection at up to 150 tonnes per hour,” says Bedard, “working with either ground or whole muscle, fresh or frozen, in bulk or in cases.
“We are talking about true 100-percent inspection—not product sampling,” he stresses, “with superior bone detection capabilities that provide for a dramatic reduction of bone issues at meat processing plants.”
Says Bedard: “In addition, our patented MDX technology is capable of detecting inorganic contaminants in a variety of packaged or unpackaged products, readily lending itself to detecting foreign bodies in a variety of applications, such as innovative packaging designs such as foldout cardboard sandwich packaging and bulk inspection applications, which can plague traditional inspection tools.”
Nevertheless, Bedard agrees that both metal detection and X-Ray inspection have a large role to play in future technological development and advances in the area of food safety.
“X-Ray inspection may not always be the answer for everyone and everything,” he acknowledges.
“The best food product inspection solutions are usually a combination of different technologies and different locations in the process—from incoming raw product inspection to final package discharge, and at all the critical control points in between.
“That’s why it’s really important for companies like ourselves to truly understand what the clients are trying to achieve and to provide them with the right technology choice for their needs and application requirements.”