For a business that started out by selling fresh lobsters and other shellfish from the back of a parked truck on the side of the road, Bedford, N.S.-based Clearwater Seafoods Limited Partnership has many valid reasons to think the
world is its oyster.
Formed in 1976 by quick-thinking local entrepreneurs John Risley and Colin MacDonald, the fledgling two-man operation has grown into one of North America’s largest vertically-integrated seafood companies—harvesting, processing and distributing shellfish and related products to over 40 countries around the world.
Nowadays employing over 1,900 employees and generating annual revenues of about $500 million, Clearwater enjoys worldwide renown not only as a reliable supplier of high-quality wild lobster, crabs, scallops, clams, whelk, shrimp, and the masago fish roe typically found on many sushi dishes—but also as a highly-principled seafood processor firmly committed to the highest standards of responsible marine stewardship and sustainability.
“We say it again and again: in order to build the world’s most extraordinary wild seafood company, we must be dedicated to sustainable seafood,” says Mike Roy, plant manager at Clearwater’s Pierce Fisheries Division production facility just outside of Bedford in Lockeport, N.S. 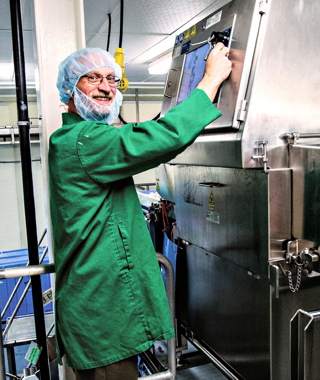 Situated in a traditional Nova Scotia fishing village situated on a peninsula in Allendale Bay, the 135,000-square-foot Pierce Fisheries plant annually processes about five million pounds of raw, frozen lobster per year, along with about seven million pound of scallops, employing over 400 people during the peak season.
As such, it is an important strategic asset among Clearwater’s extensive operational network that also comprises:

In addition to retailing its wild-caught seafood products via the company’s own Clearwater brand label, Clearwater also uses a far-flung network of distributors and direct-sales agents to serve the global foodservice market segments, with its catch making it to countless dinner plates around the world.

FAR AND WIDE
“We also send our products to food companies for further processing and value-added manufacturing,” says Roy, whose Lockeport plant handles the bulk of Clearwater’s scallop production.
“We also maintain great working relationships with importers and wholesalers to help expand our global reach on a continuous basis, Roy told Canadian Packaging in a recent interview, citing Clearwater’s well-acknowledged credentials as a leading industry innovator and pioneer.
“We are actually the first company to develop Arctic surf clam frozen-at-sea factory vessels back in the 1980s,” says Roy, adding that Clearwater also led the development and commercial success of Argentinian scallops and clams during the 1990s.
To support the Lockeport plant’s daily processing volumes of over 1.6 million scallops harvested off Nova Scotia’s coastline, Clearwater employs a fleet of state-of-the-art fishing vessels equipped with a specially-designed dredging system that can pluck the shellfish from depths of 100 meters.
Once aboard the ship, the scallops are shucked and cleaned via an automatic shucking system and are quick-frozen to lock in the scallop’s flavor and freshness.
Each vessel spends several days at sea harvesting, Roy explains, and after returning to port at Shellburne, the scallops are immediately unloaded and shipped by truck to the Pierce Fisheries facility.
Upon arrival at the state-of-the-art plant, the shucked scallops are quickly conveyed in bulk past an Eagle Product Inspection (EPI) model Bulk 400 HC X-Ray system to detect and remove any tiny bits of shell or other tiny foreign objects still stuck to the product from the previous shucking process. 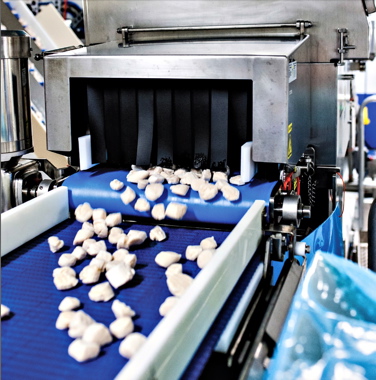 Frozen scallops exit the Pierce Fisheries’ Eagle Product Inspection (EPI) model Bulk 400 HC X-Ray system, which is used to inspect the product right upon arrival at the facility prior to sorting the product by size.

Capable of inspecting about 30,000 pounds of scallops per hour, the Bulk 400 HC (highly cleanable) X-Ray system performs a critical and vital inspection for the incoming product before it proceeds to the sorting stage to be screened for size.
“For premium retail purposes, the screening process identifies uniform-looking scallops weighing about 10 to 11 grams apiece,” says Roy, “which are temporally boxed and set aside for further processing in sauces and bacon.
“Having the scallops inspected for possible inclusions before we further process the scallops is a big time- and money-saving measure,” explains Roy. “Not only does it save us from wasting a scallop, it also saves us in wasting bacon during our value-add production of bacon-wrapped scallops.” 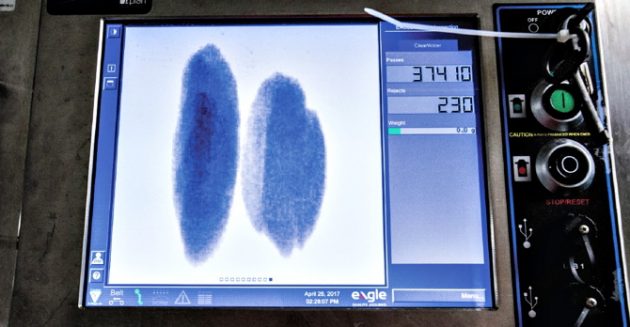 As Roy relates, the Bulk X-Ray inspection system was installed at the plant in April 2016 by leading Canadian packaging systems integrators PLAN Automation of Orangeville, Ont., along with two model Eagle PACK 320 PRO X-Ray systems used to inspect scallops after they have been bagged and sealed.
“Having a bulk product X-Ray system shows a company’s commitment to food safety,” says Roy, “but having two additional X-Ray units at each end of the production line demonstrates a deep commitment by Clearwater to ensure the consumer is only receiving premium, tasty scallops.”
In addition to detecting the bits of shell, the Eagle X-Ray inspectors also help detect and remove any bits of glass, metal and stone pulled up during dredging, according to Roy.
For their part, the high-speed Eagle Pack 320 Pro X-Ray inspection systems are capable of scanning some 100,000 pounds an hour to detect tiny 1-mm to 1.5-mm bits of shell; 0.6- to 0.7-mm metal particles; 1-mm shreds of glass; and 1.5-mm bits of stone.
After sorting and sizing, the scallops are moved upwards along a vertical conveyor toward a multihead scaling system, which releases the pre-set weights of scallops down into a bagging system below, whose integrated product coder applies the best-before dates and lot-cod “The bags then move past a second X-Ray unit—one of the Eagle Pack 320 Pro systems—to further ensure the contents of the bag contain only the tasty scallop meat,” says Roy.
After passing this inspection, the bagged scallops move down the line to be hand-packed into corrugated master cartons, sealed and placed back into a freezer until they are ready to be shipped to customers.
To make the premium Clearwater branded bacon-wrapped scallop retail products, the carefully selected scallops are manually hand-wrapped with a single strip of bacon and placed onto foam trays—weighed to the approximate
ideal weight.
The trays are then placed within a plastic film envelope and heat shrunk—creating a nice tamper-evident safety seal—and conveyed through a spiral freezer for 15 minutes to chill at -30°F temperature.
Along the way, random packs of scallops are continuously tested for food safety issues and other quality control criteria by Clearwater’s in-house quality assurance, including on-site taste-tests, to ensure the product is up to the company’s exacting standards. 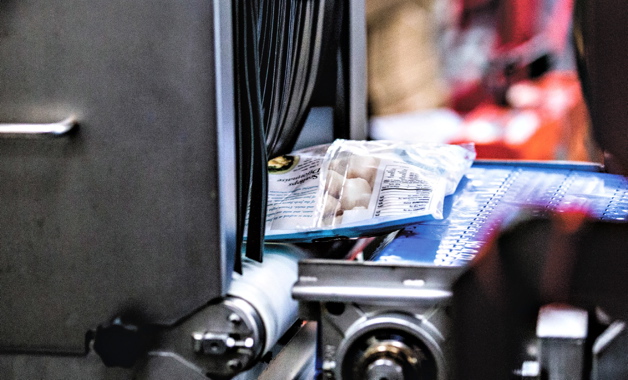 After bagging and sealing, a bag of scallops enters one of the two Eagle PACK 320 PRO X-Ray systems at the end of the line, making sure that all the scallops processed at the facility are thoroughly inspected at least twice before leaving the plant.

HIGHER GROUND
“We are certified by numerous food safety and quality assurance programs that make it imperative for us to maintain the highest possible standards for food safety,” says Roy, citing globally-recognized certifications such as
HACCP (Hazard Analysis and Critical Control Points); QMP (Quality Management Program) in-plant quality-control system of the Canadian Food Inspection Agency; and the BRC (British Retail Council) global food safety standards.
After the trays of scallops are placed onto an automatic cartoning line fed by pneumatically-opened carton blanks, a mechanical arm moves a tray of scallops into the just-erected paperboard boxes, after which dual arms close
each open end of the pack and quickly seal the boxes with a hot-melt adhesive applicator.
According to Roy, installing the three Eagle X-Ray systems at the Lockeport plant has been a massively beneficial and proactive capital investment for the facility.
“Not only do we have great product inspection with our Eagle X-Ray systems, but the people at PLAN Automation really stood out for us with their local support for the East Coast region,” says Roy, stressing the importance of having local technical support in place to minimize the possibilities production downtime. 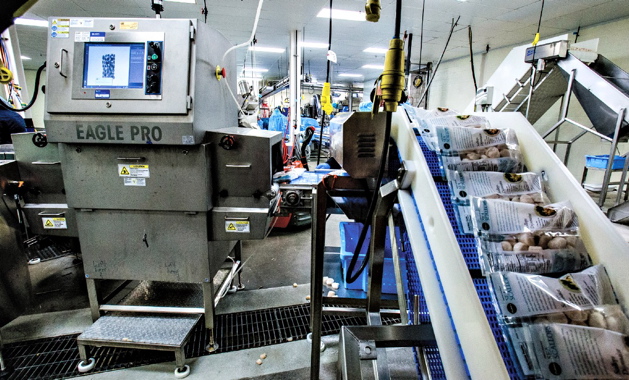 Part of that support comes from PLAN Automation senior associate Greg Pulsifer, who leads the technical sales and support in Atlantic Canada, working closely with Clearwater on this project.
“We take our safety initiatives very seriously, so having an X-Ray system go down for any length of time would mean at least 50-per cent slowdown in our production throughput, while we ensure every bag is properly checked,” he says.
“If an X-Ray goes down, we are not selling our product in a timely fashion, so having support with great service is critically important for us.”
As Roy explains, being proactive in the food safety area fits in perfectly with Clearwater’s overall ethos of being a responsible employer and corporate citizen.
“Clearwater is of the opinion that by providing a high-quality work environment, we further our own company’s ethics in being socially responsible,” says Roy, citing the Atlantic Canada’s Top Employers Award for 2017 recently garnered by Clearwater.
Moreover, Roy points out that Clearwater is always continuing to develop strategies to reduce waste and its environmental footprint with modern harvesting and processing techniques such as ocean bottom mapping, frozen-at-sea processing, dry-land storage, automated shucking, and many other industry innovations. 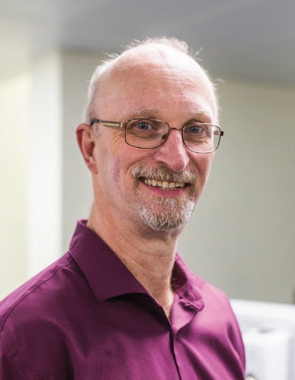 FULL HARVEST
“Our approach is to know and understand our harvest areas and their ecosystems, treat them with respect, and manage our impact,” says Roy.
“We think beyond the shellfish we harvest to broader ecosystem-based fisheries management that considers non-target species and overall habitat,” says Roy, citing the globally-recognized Marine Stewardship Council Certification validating that all of the company’s product originates from a sustainable and well-managed fishery.
Maintained through continuous third-party audits since 2012, the certification applies to all the main shellfish species harvested by Clearwater, including Argentine scallops; Canadian offshore sea scallops; Canadian offshore
lobster; Nova Scotia in-shore lobster; Canadian coldwater shrimps; Arctic surf clams; and Nova Scotia and Newfoundland snow crab.
Says Roy: “What does responsible fishing mean?
“We do habitat mapping and we target areas where we know we can fish in the most efficient manner while leaving sensitive habitats undisturbed.
“To ensure we follow that guideline, we provide full 24-hour tracking and transparency of our fishing activity to Clearwater shore-side managers, government regulators, and the general public,” Roy explains.
“Along with our own self-regulation and customer audits, there are also government audits and surveillance at every stage of the ocean-to-plate process,” he says.
“We don’t mind—in fact, we welcome it,” states Roy.
“Clearwater is proud to source its raw product from fisheries operating under rights-based fishery management systems that promote responsibility and long-term investment in healthy oceans,” he proclaims.
“Having great equipment, top-notch suppliers and partners like PLAN Automation, and caring employees helping us get quality seafood to our customers in an ethical and sustainable manner is why we all think Clearwater’s
future is bright.”

Just another typical early morning at Shellburne, N.S., where Clearwater’s scallop fishing boats call home when they are not out on high seas on scallop fishing treks lasting up to several days.