Money may not buy happiness, but if it can buy ice cream, then that may very well be the next best thing for many people.

Launched back in 2003, originally as a scoop shop, Calgary-based Righteous Gelato Co. has done many good things since then to evolve into the proud manufacturer of small-batch gelatos and sorbettos that it is today.

The company’s 8,000-square-foot production facility nowadays employs 25 dedicated full-time staff working over a busy one-shift, including a sanitation shift at the end of the day.

While some of its more established classic flavors include Raspberry Lime and Creamy Coconut, Righteous Gelato is not the type of company to simply coast on its laurels, as evidenced by this summer season’s launch on mouth-watering innovations that include White Chocolate Pretzel Gelato, Campfire S’mores, Peanut Butter Stracciatella, Matcha & Honey and Passionfruit Lemonade flavors.

The company’s flair for innovation has certainly resonated well with leading national grocers such as Loblaws, Longo’s, Whole Foods Market, Pusateri’s, Real Canadian Superstore, Sobeys, and Thrifty Foods, among others, where its clear, semi-rigid 562-ml plastic jars have been making a huge impact with Canadian consumers.

As a true poster child for product transparency, Righteous Gelato was very intentional and purposeful in its decision to use the see-through pints to package its products—enabling consumer to see and appreciate the contents right at that critical moment when consumers make their final purchasing decision.

“The industry is always evolving, and packaging does create a really critical role in our marketing strategy,” says Shashi Singh, the company’s quality assurance and sanitation lead.

To that end, all of its pint-sized are made entirely from post-consumer recycled polyethylene terephthalate (rPET) plastic, and Singh relates that many consumers have been repurposing their Righteous Gelato pints as household jars and storage containers long after the final scoop.

“Everyone is kind of moving towards sustainable and recyclable packaging ideas,” Singh told Canadian Packaging in a recent interview, “and we definitely want to stay with that by make sure that we consider lots of different options to keeping up with what’s best for the environment.”

As a small business, Righteous Gelato had no shortcomings of challenges it had to overcome on its way to mainstream success.

Trying to break into a competitive industry forces most ice-cream and gelato companies to constantly create innovative and delicious new products, while also discovering new ways to manufacture them in a way that will not only appeal to consumers, but also ensure them a spot in stores with limited shelf space.

To guarantee itself that coveted spot, Singh and his team constantly need to make sure that their gelato and sorbetto are perfectly safe for human consumption, and would not be subject to recalls due to listeria and other harmful contaminants.

“As both the company and avenues that we’re selling into grow, we’re making more product everyday,” Singh explains. “Because of that, the machines that we use on a daily basis are susceptible to making ingredients that could possibly contain a contaminant in the product.

“Hence it is always a challenge was to ensure that we were not getting any foreign materials finding their way into our product.”

Singh relates that Righteous Gelato has implemented a highly robust maintenance program set up to ensure that the plant’s machinery and equipment are functioning properly.

When the company first moved into its current new location back in August of 2015, Singh and safety operators would conduct a pre-operation inspection of the facility—making sure that all of the tanks and all the utensils were completely intact and nothing had been lost during the process.

But as Singh acknowledges, this in itself was not sufficient to provide complete safety assurance.

“To virtually verify each pint of each gelato product that we make is a little harder because you do not have any system to visually inspect the inside of the pint,” Singh explains.

“Which is why we were going for a technology that would help us recognize and identify any potential hazard that we can correct on-site.”

While Righteous Gelato initially considered installation of a metal detector, a closer evaluation of its needs by Shawpak president and business partner Nigel Turnpenny concluded that an X-Ray system at the end of the production line would provide the plant with a more effective solution.

“The primary reason we had to go with an X-Ray system is that they actually have an induction seal, a metallized film on the product, which would not allow it to pass through a metal detector,” Turnpenny explains.

Thanks to the guidance of METTLER TOLEDO and Schawpak, Righteous Gelato ultimately decided to acquire METTLER TOLEDO’s Safeline X33 Series X-Ray inspection system, which was purchased early in the year and installed in May of 2019.

Positioned right a the end-of-line, the Safeline X33 Series X-ray inspection system has capably provided all the due diligence that Righteous Gelato was looking for in optimizing its food and product safety.

“Righteous Gelato has got full traceability in the event that they did have an issue and that their machine is testing correctly and why rejects happen.”

In addition, the Safeline X33 Series X-ray inspection system is IP65 washdown-rated as standard, and boasts a tool-less belt removal design for optimal ease of cleaning. 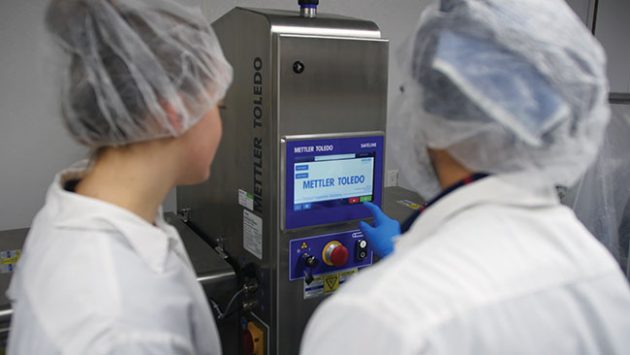 All finished gelato and sorbetto product are run through the Safeline X33 Series X-Ray inspection system to check for any possible contaminants that may have inadvertently made their way into the package before being distributed for retail sale.

Although the Safeline X33 Series X-Ray inspection system comes with a 20-watt generator, whereas most competing X-Ray systems start around the 100-watt generator size, Turnpenny explains that higher powers capabilities do not necessarily equate to better detection results.

“Because it produces less heat, the Safeline X33 does not require any cooling systems, so there’s no air conditioning units on the unit,” he points out.

“This makes it easy to move around and also requires less maintenance on this system—making it a greener machine overall,” Turnpenny asserts.

Singh concurs: “Because it is a low-energy Xray unit, in the long term it saves us a lot of capital.”

Singh adds that the Safeline X33 Series X-Ray inspection system’s ability to handle a plethora of different products—be it individual pints of gelato or full cases of products—is also a great benefit.

According to Singh, the addition of the Safeline X33 Series X-Ray inspection system has resulted in a much smoother production process overall.

“Before, if there was a problem and we recognized a potential issue in the middle of production without the X-ray, we would have no option but to hold up production because you do not know where that physical hazard ended up or in which pint or at what stage of the process,” Singh explains.

“Now that we have this new unit here, we know exactly which pint has been affected; what product needs to get quarantined; what needs to sourced; and what is passable for production,” he states. “This helps the product reach its best quality.” 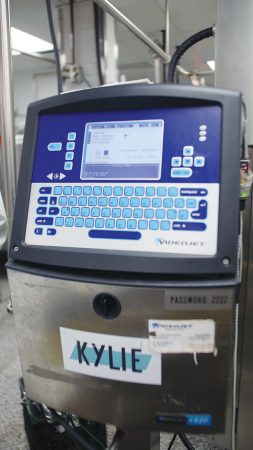 Manufactured by Videojet Technologies, this industrial inkjet printer is used to apply all the pertinent variable product information on Righteous Gelato’s retail packaging.

Using locally-sourced ingredients and dairy products, the small-batch gelatos and sorbettos are mixed onsite through a cooling tank and then put into a Tetra Pak blast freezer.

The finished product comes out the other side of the blast freezer, upon reaching the consistency and density of a standard gelato and sorbetto product.

Once removed from the freezer, the product is moved to Righteous Gelato’s rotary packaging system, which automatically fills product inside the pints.

As the final stage of the production process, a single conveyor belt runs the pints through the Safeline X33 Series X-ray inspection system, to ensure that no possible contaminants inadvertently made their way into the pints.

Part of what has made purchasing the Safeline X33 Series X-Ray inspection system a positive experience for Righteous Gelato has been the support they received from METTLER TOLEDO, which has a local Calgary-based support team that regularly visits the facility to provide all the necessary technical support and offer ongoing operator training.

“It’s not just about assisting if there is downtime,” Turnpenny says.

“If they want any additional training or a visit for other aspects, the local technician is always ready to help.”

Adds Singh: “Whenever we have required it, the service of METTLER TOLEDO to be there for us has been impeccable.

“All of those changes would be made possible thanks to our certifications and all of our food safety systems,” Singh concludes, “just like the one we invested in with our X-Ray system.”