Celebrated every year on April 22, Earth Day is the largest environmental event in the world. Founded in 1990, Earth Day Canada is a national charity that inspires and supports people across the country to connect with nature and build resilient communities.

Earth Day Canada leads an annual Earth Day campaign in conjunction with free, year-round, award-winning programs that get people outside, interacting with the natural environment—this, in turn, fosters an intrinsically motivated, enduring commitment to stewardship and conservation.

EDC works closely with school-aged children and youth through its renowned EcoKids program and new EarthPLAY initiative, and recognizes via its Hometown Heroes Awards those who are leading the way in solving environmental challenges. 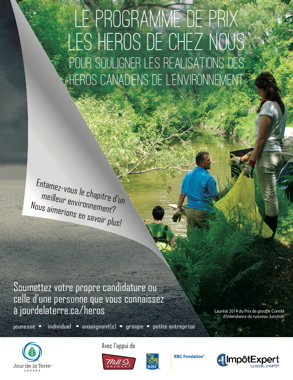 The Hometown Heroes Award Program has become one of Canada’s most prestigious environmental awards. Established in 2004, the program recognizes and celebrates environmental leaders, groups and small businesses fostering meaningful, long-term community awareness and action. Local heroes, working at a grassroots level and often with very limited resources, can make an enormous difference to the health of the planet.

Related Stories
Unisource Canada: Earth Week Success
Dan Aykroyd Toasts the 50th Anniversary of the Caesar with Some of Canada’s Unsung Heroes
Nestlé Waters Canada Receives Atlantic Packaging’s Certificate of Environmental Sustainability Award
Tim Hortons pays tribute to Canadian heroes of the pandemic with new limited-edition Hero Cups, which feature the names of up to 100 real heroes on each cup