The EU seeks to restrict plastic bag usage to protect the environment.

According to data compiled by the European Union (EU), up to 200 plastic bags are thrown away every year by the average European—most after a single use.

The EU is concerned at the waste generated, worried that the tiny particles these bags are made of could enter water or even the food cycle.

Seeking to reduce these possible risks, the EU is looking to restrict the use of plastic bags.

The proposal:
EU countries would be required to choose between two approaches to reduce the use of lightweight plastic bags:

In Europe, it is estimated that each year some eight-billion plastic bags end up as litter, including in seas where plastic particles can get into (ingested by) animals and eventually appear in the food chain.

Under the new rules, it would be up to the European Commission to set specifications on labeling and look into ways to limit the use of oxo-biodegradable bags, which it sees also as potentially having waste connotations. 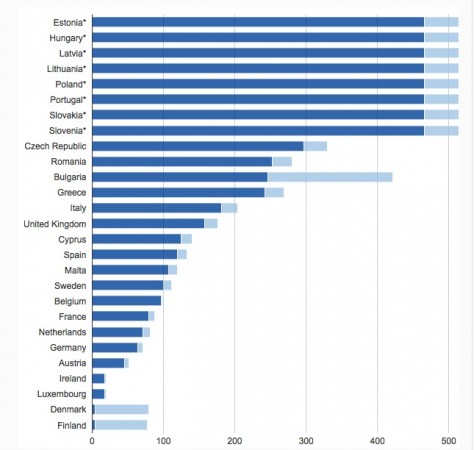 The average number of plastic carrier bags used per person per year in EU countries in 2010. Dark blue is for single-use bags, light blue for multi-use bags. Figures for countries marked with an asterisk are based on estimates. Image source: European Commission

On November 21, 2014, the European Parliament and the Council agreed on a EU-wide legislation obliging member states to reduce the use of plastic bags—though the law only applies to bags less than 0.05mm thick, noting those are less reusable and turn into waste quicker.

In 2010, the average consumption of single-use plastic bags was 176 bags per person – see chart above.

According to a statement made by PlasticsEurope, the association of plastics manufacturers, banning plastic bags would “open the door for member states to ban not only plastic bags, but other types of packaging” noting that it could hinder investments and innovation and create barriers to trade in packaged goods in Europe.

Countries such as Denmark, Ireland (and Canada) have previously instituted a payment system for plastic bag usage—considered by some as a cash grab for the government, the retail business, or an effective means to discourage plastic bag usage.

In Ireland, having the consumer pay to use a plastic bag worked. Prior to 2002 when a levy was introduced, plastic bags accounted for five percent of Irelands trash.

Virtually overnight, that level dropped to its current level of 0.25 per cent.

The official vote to ban plastic bag usage per the EU proposal will take place over the next week.