Superior performance, prestigious award recognition and a fourth season of sponsoring Top Chef Canada round out the year for Kruger Products' SpongeTowels. 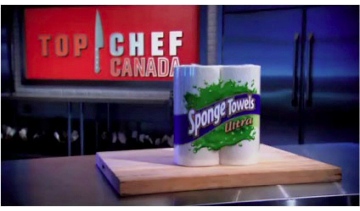 Superior Performance SpongeTowels enters 2014 on a high note after achieving record share in the paper towel category in 2013 with 11% growth in overall volume, while the category itself declined by 2%. SpongeTowels also sustained its market leading position in Quebec.

“In a low engagement category, the ability for SpongeTowels to outpace category growth, continue to increase its market share as well as improve advertising recall are impressive achievements and encourage us to expand our programs,” says Wendy Mommersteeg, category director, Paper Towels, Kruger Products L.P. “We anticipate even better performance in 2014 with more integration and targeted programs.”

Accolades to Celebrate SpongeTowels proudly accepted a silver CASSIES award for Sustained Success on February 19, 2014. Kruger Products is one of the most decorated CASSIES award winners in the Canadian packaged goods industry. SpongeTowels earned its most recent distinction for its original, multi-year breakthrough advertising campaign featuring Canada’s beloved Sponge Pockets. The campaign supports SpongeTowels’ differentiation in the market and continues to build its brand equity and achieve sustainable business results, following its brand transition from ScotTowels in 2006.

Cleaning Up After Top Chef Canada
The most extreme season of Top Chef Canada – Food Network Canada’s #1 series – premieres on March 10 at 9 p.m. EST. For the fourth consecutive season, SpongeTowels is the show’s official paper towel, awarding Canada’s Top Chef with $100,000. This year, the brand expanded its sponsorship with the launch of the highly anticipated Messy Moments campaign, a 15-second spot featuring footage of the chefs cleaning up their spills with ultra absorbent SpongeTowels.

To support this on-air sponsorship, SpongeTowels is fusing the program through strong in-store components, including on-pack and on-shelf promotion, as well as prominent product displays.

In addition to presenting this season’s winner with $100,000, SpongeTowels is encouraging viewers to cast their votes for who they think will win each week’s elimination challenge online at www.topchefcanada.ca. Viewers have a chance to win weekly prizes and one of two ultimate prizes – a Top Chef-inspired dinner prepared at the winners’ homes complete with a full clean up by the SpongeTowels cleaning crew!

In addition to the major sponsorship of Top Chef Canada, SpongeTowels has supported the Scotties Tournament of Hearts and the Canadian Breast Cancer Foundation for more than 32 and seven years, respectively. Both programs aim to increase awareness and drive much needed financial contributions to the organizations.

For more information about SpongeTowels, please visit www.spongetowels.ca and www.facebook.com/SpongeTowels.

About Sponge Towels and Kruger Products
SpongeTowels is one of Canada’s leading paper towel brands and holds the market leading position in Quebec. SpongeTowels is uniquely marketed, leveraging the popular Sponge Pocket characters, which are always ready to tackle any mess.

Kruger Products is Canada’s leading tissue manufacturer and serves the Canadian market with such well-known brands as Cashmere and Purex bathroom tissue, SpongeTowels paper towel and Scotties‘ facial tissue, in addition to away-from-home products for industrial and commercial use. Kruger Products operates facilities in Quebec, Ontario, British Columbia in Canada, and Memphis, Tennessee, in the U.S.