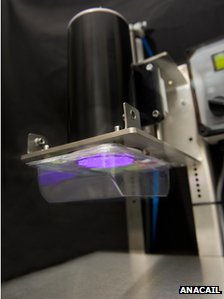 According to scientists at the School of Physics and Astronomy at the University of Glasgow in Scotland, they have built a prototype plasma machine that creates ozone to effectively kill germs in packaged food to sterilize and to extend shelf life.

The plasma system uses a retractable device which is held briefly against the surface of plastic or glass packaging. It generates plasma to turn any oxygen contained within a sealed package into ozone to sterilize the contents within.

Now, while the Ozone—O3—consisting of three oxygen atoms only remains as ozone within the package for a few hours, it will reform to its natural oxygen state after a few hours.

They also claim the process does not adversely affect the taste of the food and extends shelf-life by at least one extra day.

The product will undergo trials on production lines at several UK food processing plants over the next 12 months.

Plans are afoot to bring the plasma device to the open market via Glasgow University spin-out company Anacail, who are seeking development partners to scale the product into full manufacture.

“Although ozone can be harmful to humans, it has a very limited lifespan before it returns to oxygen and it doesn’t leave behind any dangerous residues so it’s perfectly safe to use in food decontamination.”

He adds: “Although we’re initially concentrating on offering Anacail products to the food industry, the process could be equally useful in for the sterilization of medical and dental equipment and perhaps even for use in the home.”

In December 2012, Edinburgh scientists from Queen Margaret University announced they had developed a new way of extending the shelf life of food using microwave technology which has the potential to transform global food manufacturing.