Toon In A Can elevates sales 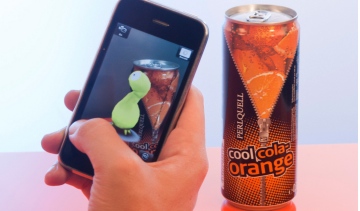 Aiming to make a big splash in the soft drink beverage market with its own brand, Edeka Hessenring has developed the new Cool Cola-Orange flavor.

The beverage will hit the shelves in 33 cl (330 ml) sleek cans from Ball sold in an innovative triangular six-pack from Smurfit Kappa Baden Packaging and with the help of an animated 3D animal character.

Appealing mainly to the 12-18-year-old age group, the promotion invites youngsters to let out the toon in the can and pose with it in photos on a smartphone. Buying one of the six-packs, or at least one of the cans, is the only way to join the fun.

A sticker on the triangular multipack draws attention to the Sprudeltier (Fizzy Beast), a cartoon animal character inside. Inside the pack are instructions showing how to let out the 3D animated figure. All it takes is a smart phone with the Junaio AR app. Point the phone’s camera at the eye-catching design on the Cool Cola can—a zipper, the hallmark of the Edeka Perquell soft drink range—and the cartoon figure poses in every photo taken with the camera. Friends can pose together with the apparently life-size figure. There is also an option to post the photos on Facebook.

“The unusual multipack from Smurfit Kappa Baden Packaging and the beverage can are great for retail promotion campaigns. The toon promotion grabs the imagination and makes for a real sales boost with young consumers,” says Frank Sasse, European retail director at Ball Packaging Europe. “As a form of packaging, beverage cans offer a huge amount of scope for inventiveness in design, and that makes them an excellent medium for new communication techniques like augmented reality, which is the technology behind our 3D cartoon figure promotion. It is an ideal combination: The can is the packaging choice for young consumers—and now the can is being used with the new media favored by those same young consumers to promote a new product.”

The Sprudeltier (fizzy beast) figure made its debut at an event staged for store owners by Edeka Hessenring on August 27 and 28 at its headquarters in Melsungen, Germany. The new six-pack and the figure were presented to some 500 retailers. The Cool Cola-Orange product is already on the shelves on a test basis in 60 stores. It is also available at many Edeka stores as a tray product for sale as individual cans. Plans are already afoot to merge the can design and cartoon character with other beverage flavors in the Edeka Hessenring line-up: apple spritzer, orangeade and lemonade—a soft drink range launched in Spring of 2010 in distinctive cans from Ball.

Augmented reality (AR) is a way of enriching everyday objects like books and packaging with multimedia information. All that is needed to enter this world of augmented reality is an Internet-capable smart phone with a camera and a previously downloaded software app. When the object is scanned with the camera, the phone immediately displays additional information—either about the product itself or something entirely different.

This awakens the consumer’s interest and helps clinch the decision to buy the product. Unlike its predecessor, QR code, which was visible as a 2D barcode, AR technology is effectively invisible.

Any logo or object can act as a trigger without any change being required to the original packaging design. Ball Packaging Europe has already carried out a number of successful promotions combining beverage cans with smart phones, including a can with a QR code for Coca-Cola and an AR application for the Mixery brand brewed by the German brewery Carlsberg.

Quick instructions for the toon in a can:

1. You need a smartphone and a Cool Cola-Orange soft drink can from the Edeka Hessenring grocery chain.

4. Point the phone camera at the zipper depicted on the Cool Cola-Orange can and choose “Scan”.

5. The cartoon figure is displayed automatically and poses for its first photo.

Ball Packaging Europe is one of the leading European beverage can manufacturers, employing 2,600 people at 12 sites in Germany, France, Great Britain, the Netherlands, Poland and Serbia. The company is a subsidiary of Ball Corporation, a supplier of high-quality metal packaging for beverage, food and household products customers, and of aerospace and other technologies and services, primarily for the U.S. government. Ball Corporation and its subsidiaries employ more than 14,000 people worldwide and reported 2010 sales of approx. US$7.6 billion. For more information, see www.ball.com.