The winners of Pentawards 2013 are announced detailing some of the most intriguing and beautiful packaging designs in the world. 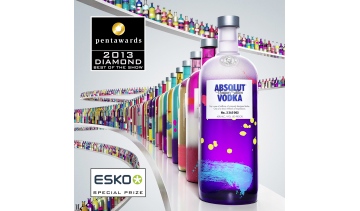 This year, the winners received these global awards in Barcelona, Spain, in the Mediterranean room of the W Hotel by the sea.

The prestigious Diamond Pentaward, 2013 Best of Show was won by Family Business (Sweden), for the design of 4,000,000 Absolut Unique bottles… each of the four million bottles is, indeed, unique.

The Platinum Pentawards reward reward the best in packaging in five major categories: beverages, food, body, other markets, and luxury. Winners are listed below. For years, Absolut Vodka has been a leader in innovation and in the launch of limited editions such as Absolut Disco, Absolut Rock, Absolut Masquerade, Denim, 100, Bling-Bling, Miami, No Label… and many others.

In 2012, the idea was put forth to create unique bottles – and no less than four million, so that each bottle would become a limited edition itself.

As a result? Nearly four million bottles were sold before the end of the promotion campaign, without any reduction in price, and furthermore during the holiday season when competition is greatest. Rather than choose between Absolut and another brand, the consumer chose between different “Unique” bottles. A brand stands out from others mainly by its color, its name, its shape. In the world of beer, mainly sold in cans, it is not easy to break out. Yet this is what the creative and engineering staff of Metaphase Design Group did by offering Budweiser “The King of Beers” a can shaped like a bow tie. Knowing the technical challenge of producing large quantities of cans at speed, one can only admire the result obtained by Metaphase Design Group. The primary objective was to create a more attractive can, visually, functionally and emotionally, in order to attract new customers to this great American classic brand. Goal achieved. Holding a Budweiser can in hand is enough to understand the added value to the brand, thanks to this unique shape in perfect harmony with the brand logo.
FOOD In the world of crisps, crackers and nuts sold in bags, it is imperative to “stand out”. Competition from national brands and private labels is pushed to its limit. Owned by PepsiCo, the Walkers brand (Lays in many countries) is the market leader in crisps and seeks a similar position in the nuts market. To achieve its goals, Design Bridge created a design representing the face of a tiger in which you can read in subliminal image, Tiger Nuts, very cleverly and creatively designed like the distinctive black stripes of a tiger’s fur. Strong is a brand of high quality food supplements developed to target health and beauty at the cellular level for a younger, stronger, more dynamic body. The objective of Pearlfisher was to stand out from functional brands and create the concept of “beauty from within” by providing an experience of the ultimate benefits of Strong in a unique and emotional way. The design showcases beautiful and elegant birds which are known for their hidden strength (owl, barn owl, Pegasus,…). The illustrations are treated in a symbolic, timeless and elegant way. The result is visually striking, creating high visibility for both retail and e-commerce. JEROHnimus is a brand of household products (pillows, dishes, vases, decorative objects, …) inspired by the works of the Dutch painter Hieronymus Bosch (1450-1516), known for his work in the quirky, mystical, surreal and disconcerting style. Studio Kluif was inspired by the great painter to create a range of packaging which presents products in the distinctive atmosphere of Bosch’s paintings. Here however, this style is expressed in a contemporary way through photography, bridging the gap between a rich cultural past and a promising future. David Stewart is known around the world by lovers of Scotch whisky. Starting at 17 as an apprentice at the Balvernie distillery, David Stewart dedicated his life to making the best whisky. To celebrate the fiftieth anniversary of his arrival at Balvernie, a limited edition of 88 bottles (sale price £20,000) was produced from a rare cask of Balvernie single malt distilled in 1962. Here Design was entrusted with the creation of this commemorative limited edition. Working together with the Scottish cabinetmaker Sam Chinnery, the agency opted for a cylinder composed of 49 layers of wood and one of brass. The layers of wood are made from 49 local tree species (Galloway Ash, Borders Oak, Lothian Walnut, Cherry, Yew, Fife Beech, Banffshire Elm,…). One layer of brass, on which is engraved the history of this exceptional single malt, mentions the distillery stills. Inside, under another brass plate, a certificate of authenticity can be found. On the label of the bottle made of blown glass, significant dates in the production of this whisky are mentioned. The wooden stopper is also hand made by the craftsman.

This seventh edition of the Pentawards received over 1400 entries from five continents and 49 countries. Despite the global economic crisis and the widespread cost reduction that goes with it, the Pentawards show a 16% increase in enrollment over the previous edition.

In addition to the Diamond Pentaward and the five Platinum Pentawards, the international jury also awarded 45 Gold Pentawards among the 52 categories competing this year. Silver and Bronze Pentawards were also presented. In total, 32 countries are among the winners.

These beautiful packaging designs from all over the world can be seen on www.pentawards.org.