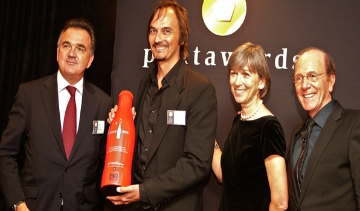 Paying tribute to Coca-Cola for its globally-recognized bottle, Pentawards presented the beverage manufacturer with a special achievement award.

Citing how Coca-Cola and its near-mythical bottle have changed and adapted over the years and have adapted to materials—plastic, metals and glass—to production constraints, market formats to consumption habits, the iconic brand has not lost its impact or unique personality.

Pentawards also noted that the Coca-Cola packaging has become a cult object:

•    a lot of people collect it.
•    artists such as Andy Warhol were inspired by it.
•    it’s constantly found at the heart of Coca-Cola’s communications.
•    it’s admired in many museums devoted to design.
•    it’s part of the daily life of billions of humans.

For these qualities and specific features, for having been able to adapt to changing times, for having resisted fashion, for symbolizing youth and the American dream, for having lent its prestige to industrial design, for being the global representation of perfect packaging that, this year, Pentawards has honored the Coca-Cola bottle.
And, through this award, Pentawards pays tribute to all the designers, artists, packaging engineers, marketing specialists and, of course, the in-house teams at Coca-Cola, who have striven, for decades, to achieve the global success of the queen of packaging!

During the Pentawards trophy ceremony, recently in New York City, Vince Vorron, design director at Coca-Cola North-America, received a magnum for the event, specially created by Turner Duckworth and produced by Sleever International, sponsor of the Pentawards, from Jean Jacques and Brigitte Evrard, founders of the Pentawards.