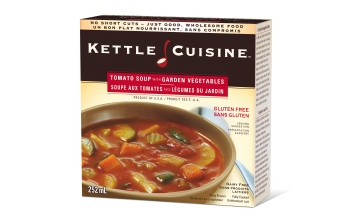 Food allergies and intolerances are a sad fact of life for many modern consumers, but thanks to companies like premium soup producer Kettle Cuisine, enjoying a tasty gluten-free meal is becoming easier for thousands of Canadians at risk of contacting celiac disease, which attacks the immune systems by damaging the small intestine after consuming gluten—a protein found in wheat, rye, barley and some varieties of oats.

Produced and packaged at the soupmaker’s production facility just outside of Boston in Chelsea, Mass., the all-natural, hand-prepared frozen soups are offered in the Angus Beef Steak Chili with Beans, Chicken Soup with Rice Noodles, New England Clam Chowder, Three Bean Chili and Tomato Soup with Garden Vegetables varieties—and will soon be available in the frozen natural foods sections of Canadian grocers to respond to growing consumer demand for gluten-free foods at Canadian  supermarkets, according to the company.

Estimated to affect about 330,000 Canadians, celiac disease is considered to be one of the most under-diagnosed chronic diseases in the world—its rates more nearly doubling across western countries in the last 25 years—with the only known proven treatment restricted to maintaining a strict gluten-free diet that is often extremely difficult to follow, due to the heavy reliance on wheat and wheat-based products in the food supply chain.

“Following a gluten-free diet can be a challenge for consumers, as it can be difficult to identify hidden sources of gluten contained in a product, and occasionally the quality and taste of gluten-free products are not on par with those containing gluten,” says Toronto-based registered dietician Sue Mah.

In soups, gluten is found mostly in pastas and noodles, as well as in the form of wheat flour roux mixes that are often used to thicken soups, says Mah, citing a recent consumer survey finding that 83-percent of Canadians have difficulties finding gluten-free foods—despite the fact that sales of gluten-free foods are forecast to grow to $42 million in Canada by 2014.

Says Mah: “The Kettle Cuisine soups offer consumers a high-quality, great-tasting, convenient meal option that is prepared with strict cooking procedures so that all soups are safe to eat for consumers with gluten allergies and intolerances.”

For more information on the soups, visit www.kettlecuisine.com.