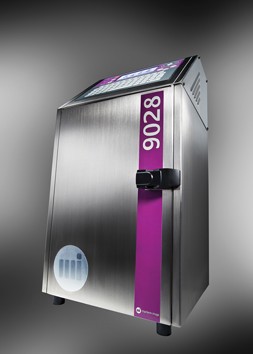 Equipped with a new-generation printhead cleaning system to ensure instant daily startups and trouble-free restarts, even after several weeks of downtime, the printer features a stainless-steel stand and an IP55 protection rating to withstand harsh industrial environments, as well as a completely new ink circuit that can run non-stop for over two years—based on annual operating time of 3,000 hours—and then be easily replaced by operators themselves in less than six minutes.

Compatible for use with a broad range of quick-drying inks, the 9028 printer can print up to four lines of data at a speed of 4.4 meters per second on most common packaging substrates such as cardboard, plastic, metal, etc., while its easy-to-handle sealed ink cartridges have been specially designed to reduce ink consumption levels by 15 per cent compared to previous models, according to the company.