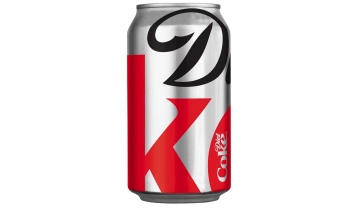 The Coca-Cola Company has launched a new Diet Coke ad campaign and a limited edition can design that is eye-catching and hip.

The latest evolution in Diet Coke‘s iconic “Stay Extraordinary” campaign features a modern new look for the Fall on the Diet Coke aluminum can and a series of new ads on television and out-of-home.

The can design, created by San Francisco-based design agency Turner Duckworth, features a section of the Diet Coke logo, cropped to feature the “D” and the “k,” set against the brand’s signature silver backdrop, creating a bold look for fall. Despite the change, the great taste remains the same and the can will still be easy to recognize as the number two beverage brand and number one zero-calorie brand in the nation.

“The new Diet Coke design is at once understated and overstated,” says David Turner, partner Turner Duckworth. “The understatement of a monogram, rather than the full name, and the overstatement of the extremely enlarged logo, both demonstrate the brand’s renewed self-confidence.”

The new package design has inspired the overall visual identity of Diet Coke, and has been featured in recent digital and out-of-home activations. In a Twitter promotion in July, Diet Coke designed mini-fridges stocked with Diet Coke that were delivered to the brands most loyal followers. In the outdoor campaign, the cropped-logo design is featured in placements around the country.

Three new 15-second television spots, debuting on Sept. 3 during the U.S. Open (Tennis), have been designed to remind people that Diet Coke helps one Stay Extraordinary. The new spots are done in a vignette style and showcase the role Diet Coke plays in people’s lives.
•    “Commute” follows one man’s early morning drive to work, braking and accelerating in the thick of traffic. The driver reaches for his can of Diet Coke, knowing it will propel him through the day ahead.
•    In “Studio,” a fashion designer hard at work on her latest creation, sips on her Diet Coke and finds inspiration to keep working on her design.
•    “Lights” features a late-night gathering of friends in a downtown loft, and Diet Coke gets the conversation and the party started.

Diet Coke is also teaming with StyleCaster, an innovative digital media company for style enthusiasts, to help trendsetters “Stay Extraordinary” all season long. A free 12-page guide featuring fashion and beauty tips and trends for men and women will be available in the soft drink aisle of major retailers this fall. Exclusive editorial content created by StyleCaster’s team of trend experts can also be found on the Diet Coke Facebook page and www.StyleCaster.com/dietcoke.

In addition, visitors to wwwMyCokeRewards.com can redeem points for limited-edition Diet Coke merchandise, including umbrellas, bags, pens and more, that feature the brand’s new look.

The new can and packaging design for Diet Coke began appearing in market September 1 and will be replaced in November for the brand’s holiday themed cans.

About The Coca-Cola Company

The Coca-Cola Company is the world’s largest beverage company, refreshing consumers with more than 500 sparkling and still brands. Led by Coca-Cola, the world’s most valuable brand, the company’s portfolio features $15-billion brands including Diet Coke, Fanta, Sprite, Coca-Cola Zero, vitaminwater, Powerade, Minute Maid, Simply and Georgia. Globally, it is the number one provider of sparkling beverages, juices and juice drinks and ready-to-drink teas and coffees. Through the world’s largest beverage distribution system, consumers in more than 200 countries enjoy the beverages at a rate of 1.7 billion servings a day. For more information, visit www.thecoca-colacompany.com.