Bicentenary of the can marked with a special award at the Canmaker Summit in Scotland. 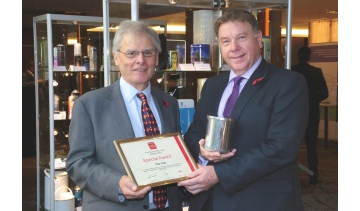 Nick Mullen (right), director of the Metal Packaging Manufacturers’ Association (MPMA) with John Nutting, editorial director of Sayers Publishing Group, which publishes The Canmaker magazine. The can held by Nick Mullen is a replica of the common ancestor from which all of today’s cans evolved.

The contribution that the metal can has made to the protection, preservation and packaging of products over the last two centuries was recognized on November 7, 2013 with a special award at ‘The Canmaker magazine Cans of the Year Awards’ held by The Canmaker magazine.

The world’s first canmaking and canning plant was established in South London by Donkin, Hall & Gamble and began commercial operations in May 1813 with the objective of supplying canned foods to customers, such as the British Admiralty.

To mark the bicentenary, the Metal Packaging Manufacturers’ Association (MPMA), which represents the interests of the UK canmaking industry, commissioned Loughborough University to fabricate two replicas of the first tinplate cans, now part of a permanent display at the premises of canmaker William Say & Co. in Bermondsey, south London, not far from the original site of Donkin, Hall & Gamble.

Nick Mullen, director of the MPMA, accepted the award as a finale to the Cans of the Year Awards presentations at a gala dinner during The Canmaker Summit.

“With the food can being conceived in the UK using preservation techniques originating in France, we at the MPMA thought it appropriate that a permanent record of the can’s bicentenary be created here,” says Mullen. “It was also real honor to accept the award from The Canmaker in front of canmakers from around the world during The Canmaker Summit.”

A bit of history on the can:

The world’s first canned foods were produced by Donkin, Hall & Gamble on May 3, 1813 at Bermondsey in south London after Bryan Donkin completed payment of £1,000 for a patent filed some two years earlier by Peter Durand.

Donkin exploited heat preservation techniques earlier developed by Frenchman Nicolas Appert who showed that meat and vegetables could be stored safely for long periods in bottles and published his work in ‘L’Art de Conserver’ soon after being awarded an ‘encouragement’ of 12,000 francs (about £500 at the time) from the French government early in 1810.

Possibly having been inspired by Appert’s work, another Frenchman, Phillipe de Girard, started experimenting with preserving food, not in glass bottles but in iron canisters which he brought to London and demonstrated to the president of the Royal Society, Sir Joseph Banks. No doubt because of the difficulty of registering new innovations in his home country, Phillipe de Girard engaged a London-based agent, Peter Durand, who filed the English patent covering the techniques on August 25, 1810.

Bryan Donkin, a Northumbrian engineer born in 1768 who had been developing paper making machinery at his ‘manufactory’ in South London, was first to see the market value of providing canned foods for long sea-going ventures.

But Donkin’s connections advanced the early stages of the process, with Royal approval accelerating awareness of the benefits of canned foods in the corridors of power, leading to significant orders from the British Admiralty.

While it would be easy to call Donkin the father of canmaking and canning, and for some that would be enough for posterity, such a title would fail to do him justice.

An energetic and broad-based engineer, Donkin worked on the development of metal pen knibs, textiles, paper making machinery, road and bridge building, tunnelling and canal construction. He became a member of the Royal Society of Arts and a founding member of the Institution of Civil Engineers, through which he rose to be vice-president.

From a manual production rate of 60 food cans a day in 1813, canmaking has grown into global industry that manufactures around 475 billion cans a year for food, beverages and other products.

The Canmaker is a monthly business magazine and on-line resource with subscribers in more than 100 countries. It is published in the UK by Sayers Publishing Group.

Photo:   Nick Mullen is pictured right with John Nutting, editorial director of Sayers Publishing Group, which publishes The Canmaker magazine. The can held by Nick Mullen is a replica of the common ancestor from which all of today’s cans evolved.