New heavy-duty container pallets from Cabka-IPS can be seen at the international packaging fair Emballage 2014 in Paris.

Situated within Booth # 6M 102 at the international Paris exposition Emballage 2014, November 17 – 20, 2014, Cabka-IPS will present one of the world’s most comprehensive and innovative ranges of plastic pallets and boxes.

Cabka-IPS products are used in a wide range of industries and applications, such as chemicals and pharmaceuticals, the food and beverage industry, the automotive industry, retail, and agribusiness.

Among many other products Cabka-IPS will be introducing its new container pallets Endur S7 and C7.2.

The pallets are characterized by its square size, robust design, impact resistance, and a load capacity of 1,250 kilograms on high racks. Both are used, for example, to store FIBCs (flexible intermediate bulk containers or ‘big bags’), in high-bay warehouses. 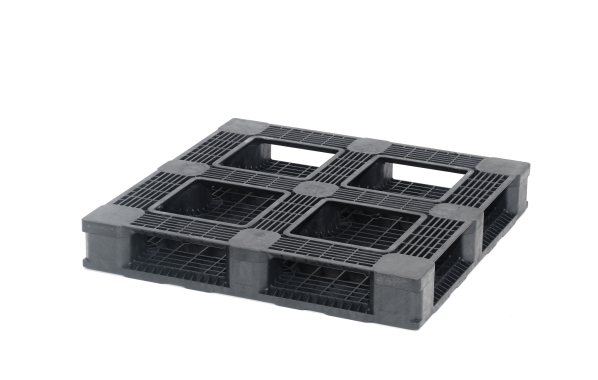 Both pallets are available with three or, as shown, with six runners. Photo courtesy of Cabka-IPS.

Besides the three runners version, the pallet is available with six runners and can therefore be used for block stacking. The pallet comes with an open or closed upper deck which can optionally be equipped with anti-slip strips.

Cabka-IPS produces plastic pallets and boxes in Weira (Thuringia), Ieper  (Ypres, Belgium), Valencia (Spain) and St. Louis, MO (U.S.). The company employs around 450 people in Europe and North America. Cabka-IPS products are in use in more than 80 countries.