A monthly look at some of the hits and misses in the packaging world from the viewpoint of Joe Public, Canadian Packaging magazine’s revolving columnists. From the July/August 2019 issue.

When I first learned legal recreational cannabis use was to become a reality, like a true Checkout columnist, I wondered what the packaging paradigm would come to look like. Would we be forced to buy legal weed in pimped out packages covered with indulgent pot-memes? Or would dreadlock stereotypes give way to a more refined experience, like purchasing a fine wine or a well-aged cheese? After finally venturing out to purchase some legal weed, it turns out to be neither. Strict rules aimed at ensuring young people aren’t enticed into using cannabis have pretty much legislated the fun out of things from a packaging perspective. For once, package design has had nothing to do with the insatiable demand for a product that has led to shortages in availability and a bit of a backlash against the way some provincial governments have rolled legalized weed out to consumers. In the end, I’m glad it’s legal because it was the right choice for a mature society. That said, I wish the industry could have been given the creative leeway that its primary competitors—namely the wine, spirits and beer industries—enjoy to market their products. 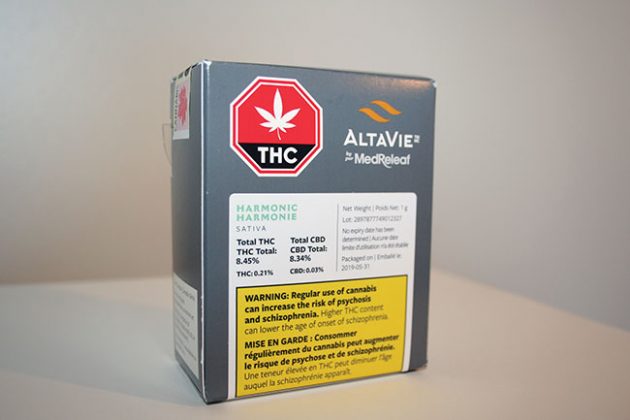 In lieu of exciting marketing options, most pot shops have had to rely on personal service and store set-up to gain that competitive edge. On my first visit to one of Toronto’s recently opened storefronts, the service and selection happened to be as bland as the pot packaging itself. In the end, I settled on a one-gram box of a strain called Harmonic produced by AltaVie, the recreational offshoot of Markham, Ont.-based medical marijuana producer MedReleaf. The red-eyed salesperson handed it to me in a grey cardboard box, which is consistent with the government’s rule limiting packaging to a single, uniform color. A little larger than a deck of cards, the most prominent elements on the package were the “stop sign” logo that denotes it as a cannabis product, and the large black-on-yellow health warnings cautioning users about weed’s darker side. The only real packaging innovation I could detect was how AltaVie dealt with the childproofing requirement. As the handy infographic located on the top panel indicates, people need to simultaneously push in two tabs along the backside of the box in order to slide the inner plastic packaging free from the cardboard. Hopefully, this doesn’t get more difficult as users indulge. 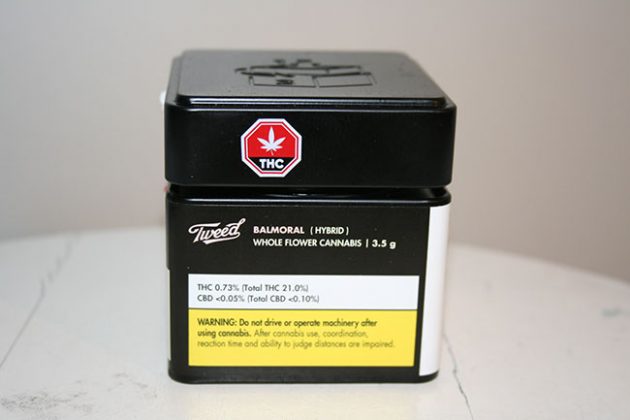 While regulations require the containers to be intentionally bland, the government did give producers some leeway on the size, shape and packaging materials that they can use. Fittingly, Smith Falls, Ont.-based producer Tweed Inc. have used this wiggle room to distinguish themselves and their products by offering dried flowers in black plastic cube containers. The 3.5-gram container I got (empty) from a friend was about the size and weight of a standard Rubic’s Cube, which uses a child guard mechanism similar to those found on prescription pill bottles. Each strain gets its own name and color association, such as the pale-pink Balmoral strain pictured here. The only real problem I initially had with the container was on the environmental level: I would loathe to see these cubes form yet another garbage island somewhere in the middle of the Pacific. To their credit, though, Tweed has joined forces with Toronto-based upcycling specialists TerraCycle Canada to create a recycling program ensuring cannabis containers get diverted from landfill sites. Once you’re done with your cube, you can take it back to a Tweed-partnered retailer and conveniently drop it in the recycling box on-site. If that’s too much trouble, you can set up an account, print up a UPS label, and send it to TerraCycle for free. From there, TerraCycle will see that the plastic is melted down and reused in some other fashion. 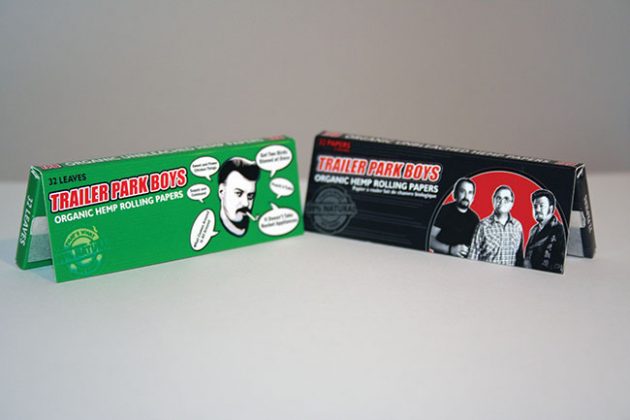 Pot producers certainly face heavy restrictions, but those involved in the exploding paraphernalia market have obviously been getting creative. One visit to a local head shop and you’ll see a rainbow of products, from high-tech vaporizers to blown glass bongs and pipes of all shapes and sizes. What caught my eye, however, was the colorful display of rolling papers found in the display case of the Toronto Hemp Company, where I ended up purchasing two packs of the Trailer Park Boys-branded rolling papers from Jimmy Zee’s, the Port Coquitlam, B.C.-based distributor of so-called “Man Cave” items. If you’re unfamiliar with the Trailer Park Boys television show currently streaming on NetFlix, think of it as a crass modern-day cross between The Three Stooges black-and-white films from the 1930s and 1940s and the low-budget flicks put out in the late 1970s and early 1980s by the once-groundbreaking stoner comedy duo Cheech and Chong. With 32 leaves per pack, it’s a fun and gimmicky way to inject a bit of made-in-Canada humor into one’s pot experience. 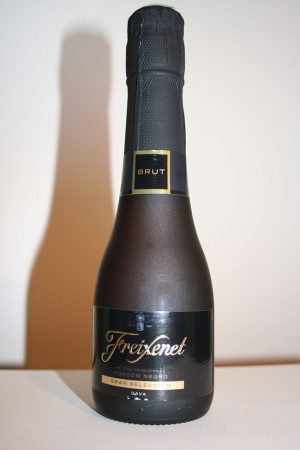 My wife and I look for just about any reason to celebrate—pot legalization, an important anniversary, the arrival of the weekend, etc. As many will agree, a real celebration requires a bit of bubbly to make it official, which is why a single-serve 200-ml bottle of Freixenet from Spanish bubbly producer Freixenet S.A. is a frequent fixture of our kitchen refrigerator. Styled after the standard-sized 750-ml bottle of Brut, these mini bottles are not really all that new, but for many occasions they offer just the right amount of celebratory cheer for couples who may not necessarily consume 750-ml of the sweet and highly carbonated libation or, worse still, just leave the leftovers in the fridge to go flat, or worse. 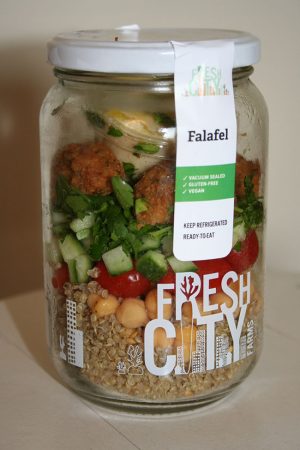 With all that celebrating, it’s important to take care of ourselves and eat well, which is what lead me to discover Fresh City, billed as Canada’s largest city farm, located at Downsview Park in Toronto’s north end. With one storefront in the city, and another on the way, the company, along with its network of member farmers and its 3,000-square-foot greenhouse, relies mainly on its delivery service and pick-up hubs to provide consumers with locally produced
organic options on a year-round basis. I recently tried their delicious gluten-free, vegan Falafel salad jar, which arrived on my doorstep in a reusable, insulated tote bag, along with a cooler pack, to keep everything fresh. Layered
with quinoa, chickpeas, grape tomatoes, cucumbers and falafel—and topped with a delectable tahini dressing—this healthy option is perfect right out of the jar or for sharing. shared with others. Once done I just leave the delivery tote with the rinsed out jars on my doorstep for pick-up on my next delivery date.

Paul Pethick is a Toronto-based writer and editor specializing in the healthcare industry.