A White Paper created by Butler Automatic, the inventor of automatic splicing and the largest global manufacturer of automatic web splicing equipment for food, pharmaceutical, printing and CGP markets.

Downtime, both planned and unplanned, can have a pronounced impact on packing line efficiency and throughput.

This downtime, caused by film roll changes, registration errors, catastrophic film failures, bottlenecks, and more, is costly, and may seem impossible to avoid.

Taking appropriate steps to streamline processes wherever possible can help to mitigate the repercussions of downtime, improving your overall line efficiency and therefore profitability.

Operators often estimate that each packaging web roll changeover and splice to the previous roll takes about one to two minutes, which is itself a great deal of time when the number of roll changes per day are accounted for.

These estimates are quite low, however; measured downtime runs closer to an average of three to five minutes per roll change.

If, in a conservative estimate, a company continuously running a single packaging line must change film rolls ten times per day, the line loses an average of at least 30 minutes of production per day, or more than 8,000 minutes each year. Taking into account a similarly conservative estimate of 80 packages per minute and a $0.50 profit per item, the decreased throughput accounts for hundreds of thousands of dollars in potential profits lost per year. 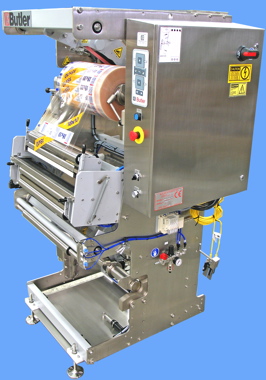 Other causes of downtime in packaging lines also relate to film splicing.

Improperly spliced film, for example, can lead to weak splices and splice failure during production. When the splice separates, or a weak spot in the film itself causes it to fail, the line must be shut down until the web path is rethreaded.

This can take anywhere from 20 minutes to an hour in most applications, or two hours or more in aseptic applications where operators must re-sterilize machinery before restarting the line. Most packaging lines experience these kinds of critical failures about once every week.

Poor splices can also lead to registration errors in the film, where the film is improperly aligned and defective packages result.

The registration error may result in barcoding issues, faulty seals, and/or package aesthetics that are simply unacceptable for consumer goods. These errors don’t cause downtime, but they can cause a great deal of waste and rework, thereby significantly decreasing line throughput and efficiency.

Bottlenecks are the final main cause of line downtime and inefficiency to be highlighted here.

Bottlenecks represent a significant loss of potential throughput, given that the throughput of a packaging line is only maximized when there are no slow spots in the line that have to be compensated for by slowing or stopping the upstream parts of the line.

If one stage of a packaging line can handle 1,000 packages per minute, but the following stage can only handle 800, packages will accumulate between the two until the maximum accumulation is reached, at which point the first stage will have to be stopped or slowed until the excess packages are processed.

Maximized throughput is critical to line efficiency and to maximizing profits, and so identifying and reducing bottlenecks are critical as well.