There’s a new tariff in town

China retaliates against propane and petrochemicals - a look at the proposed 25 percent tariffs on a wide array of US products.

Two days ago, only pork products received the maximum 25 percent tariff level. Today 44 products related to chemicals or energy were put on notice with propane, polyethylene, and PVC (polyvinyl chloride) garnering the biggest headlines in the chemicals space.

China imported eight percent of U.S. propane production last year, and only imported five percent of U.S. polyethylene and PVC production. The reliance on China expands through 2025, especially in propane as China propane dehydrogenation capacity undergoes a second capacity “wave” in 2019-2021. U.S. producers could manage a short-term tariff via alternative logistics or directing flows to Europe, but a lasting tariff would threaten the next wave of export-based petrochemical investments.

How Did It Happen?
Source: ABC News

During the presidential campaign, then-candidate Trump frequently criticized China on the campaign stump: “They’re ripping us left and right. Just take them to McDonald’s and go back to the negotiating table.” – July 21, 2015.

March 2018 – The U.S. imposes 25 percent steel tariffs and 10 percent aluminum tariffs on all countries. Eventually NAFTA, EU, and several other countries were declared exempt from the tariff, leaving China as the primary target.

April4,  2018 – Declaring that “it is only polite to reciprocate”, China matches the U.S.’s $50-billion target and proposes 25 percent tariffs on a wide array of U.S. products. Many target Trump’s voter base, such as pork and soybeans from the Midwest and whiskey from Kentucky. Texas is also staunchly Republican, leading to propane and petrochemicals making the list.

How Important Is China To The Propane And Chemicals Market?
China imported $3-billion of propane and chemicals targeted in the latest tariff proposal. Propane accounted for 60 percent of 2017’s value and is the only growing sector since 2010. Propane exports felt shale’s impact sooner than petrochemicals, since it takes 5-7 years to build a new petrochemical complex. This will all change starting in 2018 as first wave of new petrochemical capacity reaches full production. 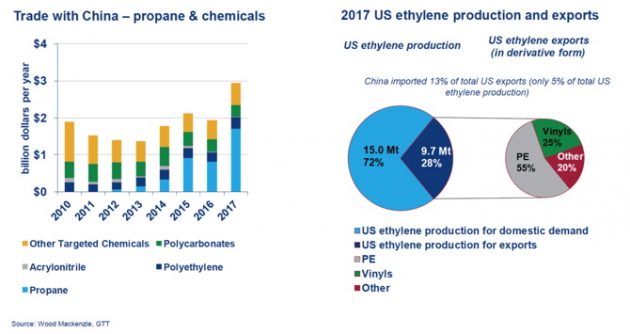 How Important Is China To The Propane Market?
In 2017, China imported 123,000 b/d of propane from the US worth $1.7-billion. China is the U.S.’s third-largest propane importer after Japan and Mexico. China lowered the previous tariff to one percent because China’s PDH capacity is surging. PDH operation prefers high-purity HD2 grade propane that U.S. exporters specialize in and is not easily backfilled by other sources. If the 25 percent tariff comes to fruition, U.S. propane exporters could target lower-valued European steamcracker demand.

How Important Is China To The Polyethylene Market?
The U.S. was China’s sixth-largest PE source in 2017, behind several Middle Eastern and Asian countries. From 2018 to 2025, exports grow nearly 1.5 mtpa as long-awaited ethane-based investments come online. Ethane currently has a $400/ton advantage versus Asian naphtha cracking. The 25 percent tariffs would primarily affect LDPE (Low-density polyethylene) and LLDPE (Linear low-density polyethylene), requiring repositioning between the U.S., Middle East, and Europe but U.S. producers could still supply Chinese markets via local JVs. 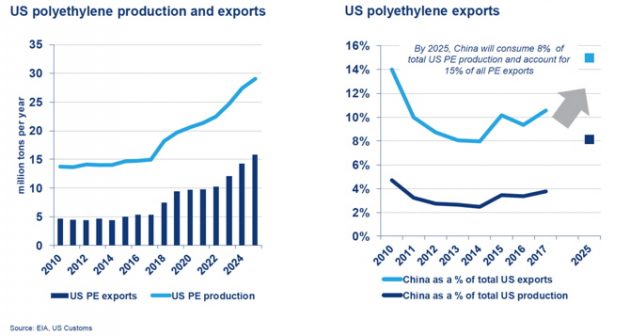 How Important Is China To The PVC Market?
In 2007, shale economics and the domestic housing collapse led to a shift upward in the importance of PVC exports to U.S. producers. China, meanwhile, was adding massive domestic PVC capacity. Today, almost 40 percent of U.S. PVC goes offshore and future expansions target additional export volumes. China is a key trade partner, absorbing around 11 percent of all U.S. PVC exports. EDC is tariff targeted also, so the potential impact on the full chain is actually greater. 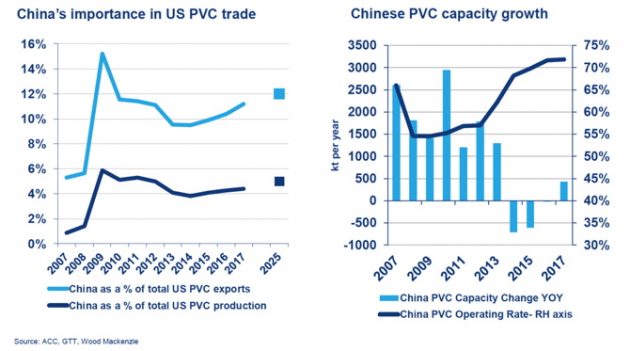 China’s tariff announcement was met with assurances from President Trump that we are not in a trade war. Trump’s National Economic Council director has already dialed back the tension, insisting tariffs may not take effect and could be a negotiating tactic.

If China actually levies these additional 25 percent tariffs against US products, we expect the following to occur:


Related Stories
Trump wants to impose tariffs on aluminum and steel coming in to the U.S.
Plastics sector rebounding in Canada
China to end 2003 American beef ban
Imports and exports drop in April